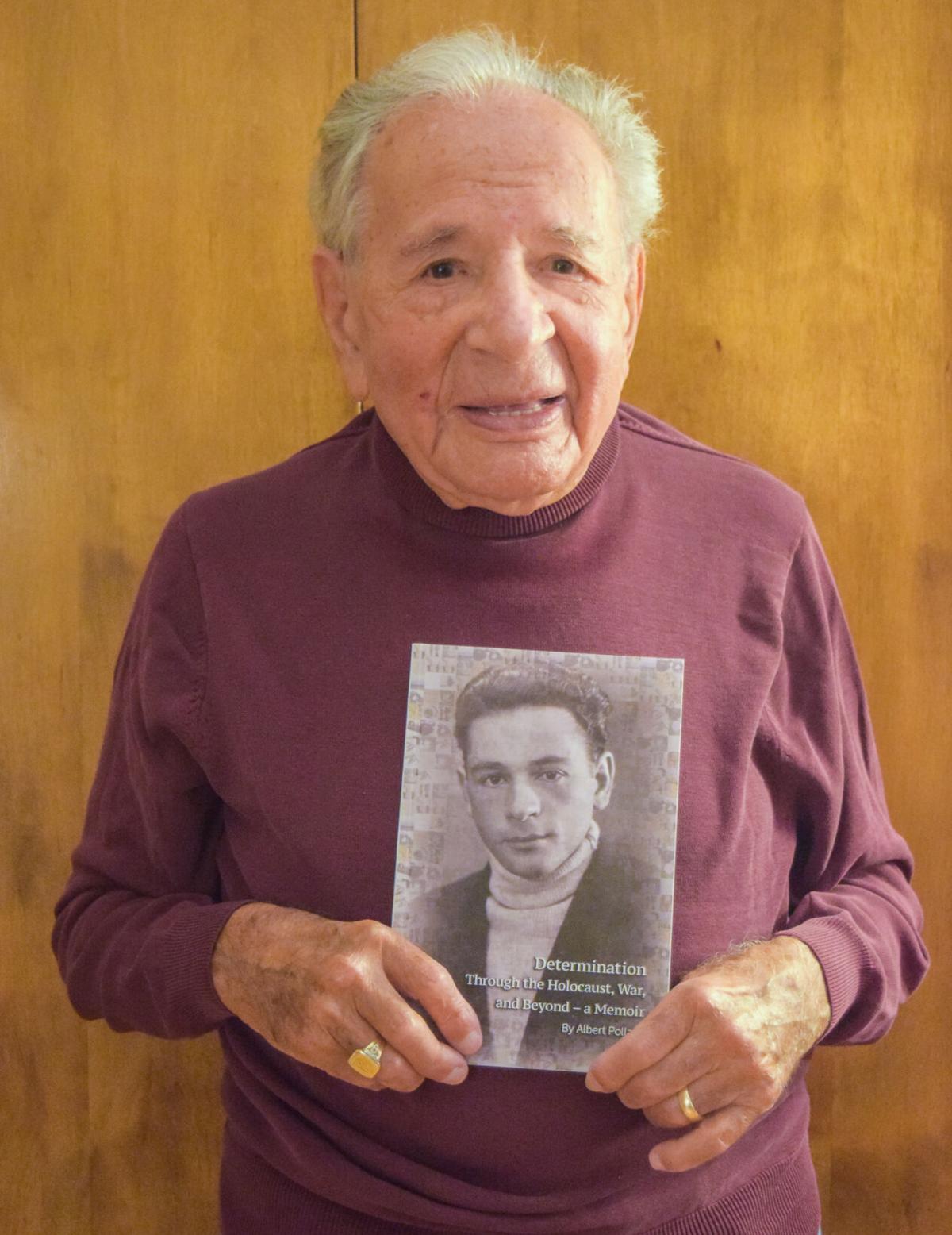 Albert Pollack holds up his memoir, “Determination Through the Holocaust, War, and Beyond — a Memoir” 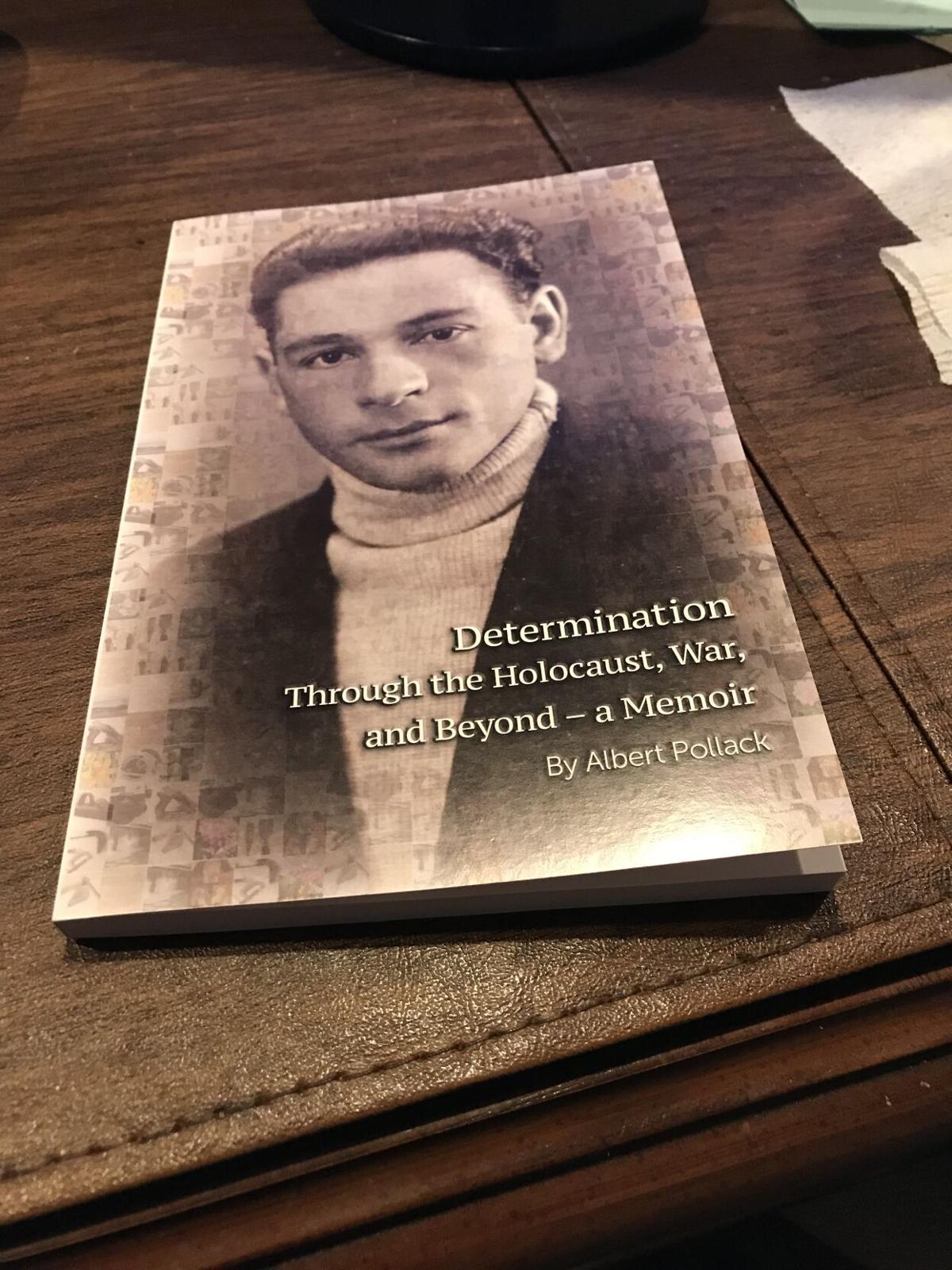 “Determination Through the Holocaust, War, and Beyond – a Memoir”

Prior to 2016, Albert Pollack’s stories of his escape from Nazi control as a late teenager, fleeing to Russia without anywhere else to go, serving as lieutenant of a Russian-formed army of 64 Polish men and leading them all to safety, and every epic detail in between were only known by two people: Pollack and his wife, Madelyn Pollack.

When Pollack, 98, was asked to light a candle at Green Road Synagogue in Beachwood for Yom Hashoah, the community heard the CliffsNotes version of Pollack’s life. He was then asked to speak at a series of historical societies and synagogues for crowds of adults and students, and for the first time, someone other than Madelyn heard about Pollack’s life.

“When he was done speaking, the kids were crowding around him,” Madelyn recalled. “The girls were hugging him; the boys were asking him questions. They had to drag those kids out to the bus. They did not want to leave him.”

Madelyn knew the world needed to hear her husband’s story – one he had once been told by family members long ago could not be considered that of a Holocaust survivor.

To prove to the world that not every Holocaust survival story is one defined by concentration camps, labor camps or death marches, Madelyn used her knowledge of Pollack’s life built over 45 years of listening to his tales and got to work typing Pollack’s memoir with his input.

After a year, Pollack’s verbal narratives lined the pages of “Determination Through the Holocaust, War, and Beyond – a Memoir” for others to pick up and read.

The memoir traces Pollack’s life from the very beginning as a boy growing up in Chorostkov, Poland, with his mother. As the Nazis started to invade the country, Pollack was unable to convince his mother to leave their home and he went to Russia just one day short of their town being breached. Pollack used his skills in carpentry to find employment, and he eventually led a Russian army of Polish men against the Germans after receiving training.

While serving as lieutenant – all while in his early 20s – Pollack taught his men how to properly dig mortars into the ground when they stopped working properly to prevent them from killing them. He also came face-to-face with a Nazi who had been abandoned by his men and learned to put their uniforms aside to show compassion for a person in need.

After the war’s end, Pollack purchased a camera and became interested in photography. He immigrated to Cleveland where an aunt lived, and he set down roots. He started a family and opened a photography studio and custom framing business, which his son, Joe Pollack, took over and runs. Pollack and Madelyn live in South Euclid and attend Heights Jewish Center Synagogue in University Heights.

“The purpose of the memoir is not to splash the paper with some advice,” Pollack said. “It’s to show that people live through life for a certain reason, and with God’s help, too.”

Despite everything that happened to him, losing his mother, his home and loved ones, Pollack refuses to allow the bad memories to overpower him. He learned early on to find the beauty in even the darkest moments and allow its light to brighten any negative feelings.

“When I feel blue or have something that bothers me, I don’t concentrate on how bad it is,” Pollack said. “I think back on how many people were nice to me; how wonderful it was. I don’t want to live with bad things. When you think back on good things, you’re going to live longer – and I’m only 98.”

The book is available at streamlinecle.com/bookstore, Frank’s Hebrew Book Store in South Euclid, Loganberry Books in Cleveland’s Larchmere neighborhood or contacting the Pollacks at msbgp43@gmail.com