This story has been updated with additional quotes.

Faced with allegations that 34 cases of COVID-19 at Montefiore in Beachwood were mishandled in October, the organization terminated its administrator, nursing director and assistant nursing director, according to Jim Newbrough, president and CEO of Menorah Park, which is the parent organization of Montefiore.

Ari Hyman confirmed to the Cleveland Jewish News Oct. 29 that he is no longer the administrator at Montefiore.

Newbrough praised an employee for reporting the problems to her manager and human resources.

Newbrough wrote a memorandum Oct. 29 to residents and their families regarding the circumstances leading up to the terminations.

“As you know, in mid-October, a number of Montefiore residents in one of our units began exhibiting symptoms of COVID-19,” Newbrough wrote in his Oct. 29 memorandum. “Tests were conducted, but the results were negative. After rerunning the tests, several residents tested positive.” 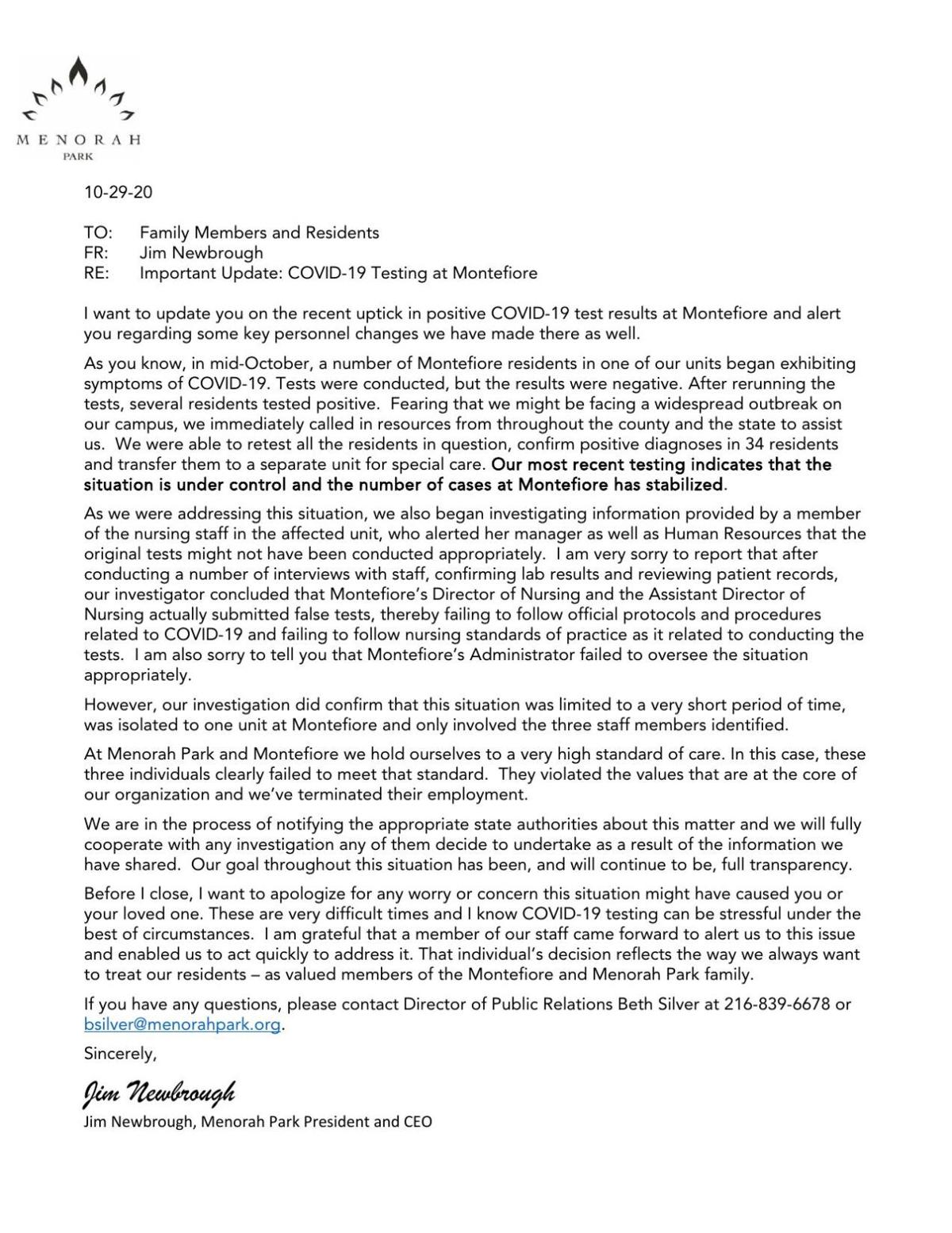 The COVID-19 positive test results came back on Oct. 21, Newbrough wrote in an Oct. 30 email to the CJN.

“Fearing that we might be facing a widespread outbreak on our campus, we immediately called in resources from throughout the county and the state to assist us,” Newbrough wrote in the memorandum.

External partners, he told the CJN, were brought in Oct. 22.

“We were able to retest all the residents in question, confirm positive diagnoses in 34 residents and transfer them to a separate unit for special care,” Newbrough wrote. “Our most recent testing indicates that the situation is under control and the number of cases at Montefiore has stabilized.”

As Montefiore was investigating, Newbrough wrote, a nursing staff member reported the “original tests might not have been conducted appropriately.”

He also wrote, “I am also sorry to tell you that Montefiore’s administrator failed to oversee the situation appropriately.” Newbrough said the three people “violated the values that are at the core of our organization and we’ve terminated their employment.

“However, our investigation did confirm that this situation was limited to a very short period of time, was isolated to one unit at Montefiore and only involved the three staff members identified.

“We are in the process of notifying the appropriate state authorities about this matter and we will fully cooperate with any investigation any of them decide to undertake as a result of the information we have shared. Our goal throughout this situation has been, and will continue to be, full transparency.”

Newbrough apologized “for any worry or concern this situation might have caused you or your loved one.”

Kevin Brennan, Cuyahoga County communications officer, confirmed to the CJN the county was made aware of the outbreak on Oct. 22 and was investigating.

“As we do with all requests from long-term facilities that have issues with communicable disease, whether COVID or otherwise, we provide support in terms of situational assessment, clinical and environmental guidance, (personal protective equipment), communications, and linkage through partner agencies such as (the Ohio Department of Health) and healthcare providers,” Brennan wrote in an Oct. 29 email to the CJN.

He said employees at the Cuyahoga County Board of Health involved in the investigation include case interviewers, contact tracers and data entry personnel.

“With any outbreak, we want to be sure that all standard procedures are followed such as separating/cohorting ill patients, arrangements for testing if possible, proper use and sufficient supplies of PPE, limiting/eliminating outside visitors, increase in cleaning and disinfecting, etc.,” Brennan wrote. “The leadership at the facility was very responsive and collaborative in their dealings with us.”

In a follow-up email to the health department, Rebecca Hysing at the county health board, told the CJN on Nov. 2, “We came in to assist Montefiore with initial testing, which has been completed,” Hysing wrote in an email to the CJN. Ongoing testing is being managed by the facility.”

She deferred to Montefiore and to the Ohio Department of Health regarding questions specific to any investigation.

“Falsification of patient records is a violation of Rule 4723-4-06(G), OAC,” she wrote in a Nov. 2 email to the CJN. “If substantiated, the potential range of sanctions includes a fine, reprimand, license restriction, suspension, up to permanent license revocation. Section 4723.28(B), ORC. Each case is reviewed individually by the board of nursing based on the facts of the case. All licensees are entitled to notice and opportunity for hearing.”

Fisher said she could not confirm or deny the existence of any complaint, citing Ohio law.

She also wrote, “Any disciplinary action taken by the Board of Nursing is a public record.”

Management at Montefiore failed to comply with state, federal and local laws regarding the health and safety of employees, according to two id…