As Montefiore faces federal fines of $316,980 stemming from falsified COVID-19 testing in October 2020, a criminal investigation is underway, the Cleveland Jewish News has learned.

The Ohio Attorney General’s Office has started the criminal investigation, according to a motion filed April 23 in a civil lawsuit in Cuyahoga County Court of Common Pleas. The target or targets of the investigation were not identified. Three other state agencies are also investigating the falsification of testing that occurred on Oct. 13, 2020. They are Ohio Department of Health, Ohio Board of Nursing and Ohio Board of Long-Term Services & Supports.

Menorah Park President and CEO James Newbrough Jr. identified Tina Renee King, then-director of nursing, and Marie Gelle, then-assistant director of nursing, as responsible for the falsification. He also said that Ariel Hyman, then-administrator, “failed to oversee the situation appropriately,” in an Oct. 29, 2020 email to residents and their families. Hyman, King and Gelle were all three terminated that day.

“We will not be making any comments regarding ongoing litigation or investigations,” Beth Silver, director of public relations and marketing at Menorah Park, wrote in an April 28 email to the CJN.

Montefiore will not appeal, according to Silver.

“This is part of due process with the Ohio Department of Health and Centers for Medicare and Medicaid Services,” Silver wrote. “In this case, the penalties are based on what we self-reported last October involving testing and three individuals. While we do not agree that we deserved the citation, we accept the decision and we are not appealing it. We are focused on moving forward.”Attorney Robert C. Pivonka of Rolf Goffman Martin Lang LLP in Pepper Pike is defending Montefiore and its affiliate, Menorah Park, and individual defendants, in a civil lawsuit filed by the former two top nurses at Montefiore, who are plaintiffs in the lawsuit.

“Each of these agencies has initiated and is conducting its own investigations,” Pivonka wrote.

In an April 14 filing, King and Gelle dropped some defendants initially named in the lawsuit because they were “uninvolved” in the daily operations of Montefiore: Menorah Park Foundation, the Montefiore Foundation, Menorah Park at Home, LLC, and Menorah Park Men’s & Women’s Association. 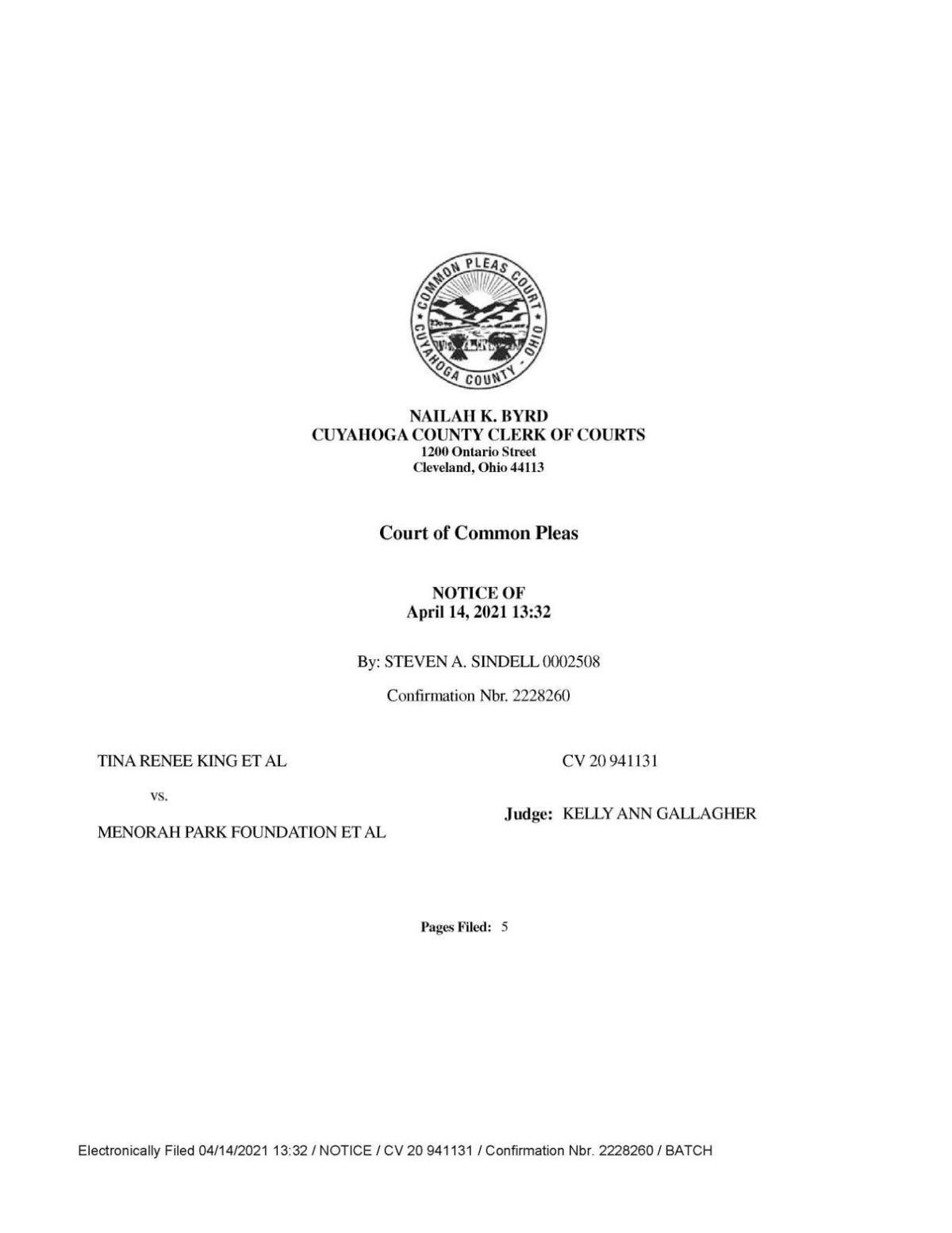 On April 12, Montefiore filed a countersuit against King and Gelle.

Pivonka’s motion for a stay on all proceedings and a protective order relates to a motion for discovery – or the production of evidence – by King and Gelle through their lawyer, Steven A. Sindell of Sindell & Sindell, LLP of Beachwood.

Pivonka specified the nature of the Ohio attorney general’s investigation in his motion in the King and Gelle lawsuit.

“The issues in this case and in the other investigations – most notably the OAG’s criminal investigation – are virtually identical,” wrote Pivonka. “The question of whether (King and Gelle) did, in fact, submit falsified samples for COVID-19 testing is the central issue of the investigations… 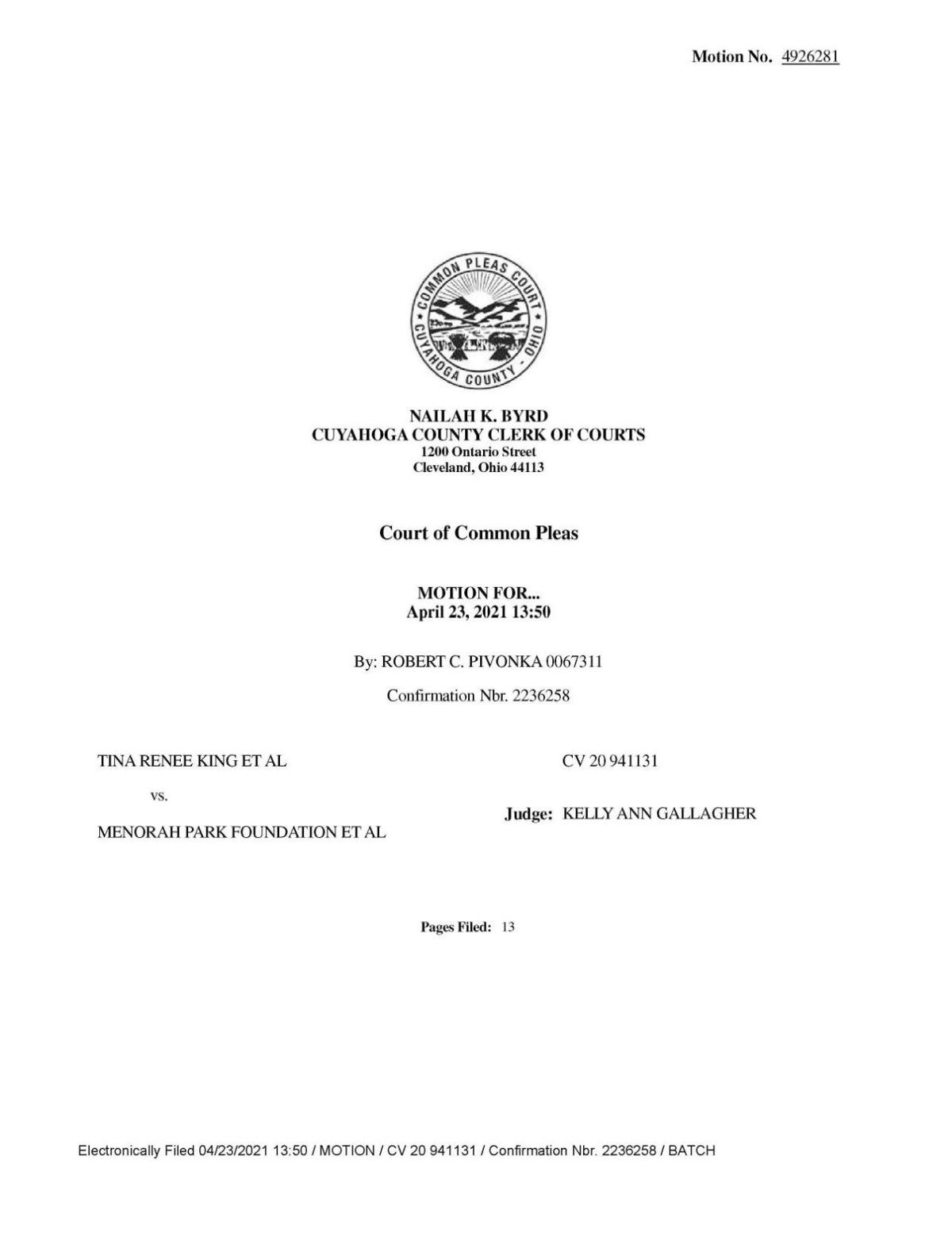 In a Feb. 3, 2021, letter addressed to Montefiore’s administrator, Beth A. Karpiak, long-term care branch manager for the Center for Medicare and Medicaid Services Chicago operations group, listed findings following the falsification of COVID-19 testing and based on other deficiencies at Montefiore, including abuse and neglect.

The CJN previously reported Montefiore was ordered to file two plans of correction in November and December. In addition the Ohio Department of Health applied a discretionary denial of payment for new Medicare and Medicaid admissions effective Dec. 2 through Dec. 29, 2020.

Montefiore and Menorah Park, which affiliated July 1, 2020, had the right to appeal the fines. Waiving their right to appeal, as Silver told the CJN on April 28, they intend to do, would result in a 35% reduction in fines.

In addition, Karpiak’s letter stated that Montefiore was prohibited from approval of nurse aide training programs and competency evaluation programs from Dec. 2, 2020, because of the imposition of penalties. 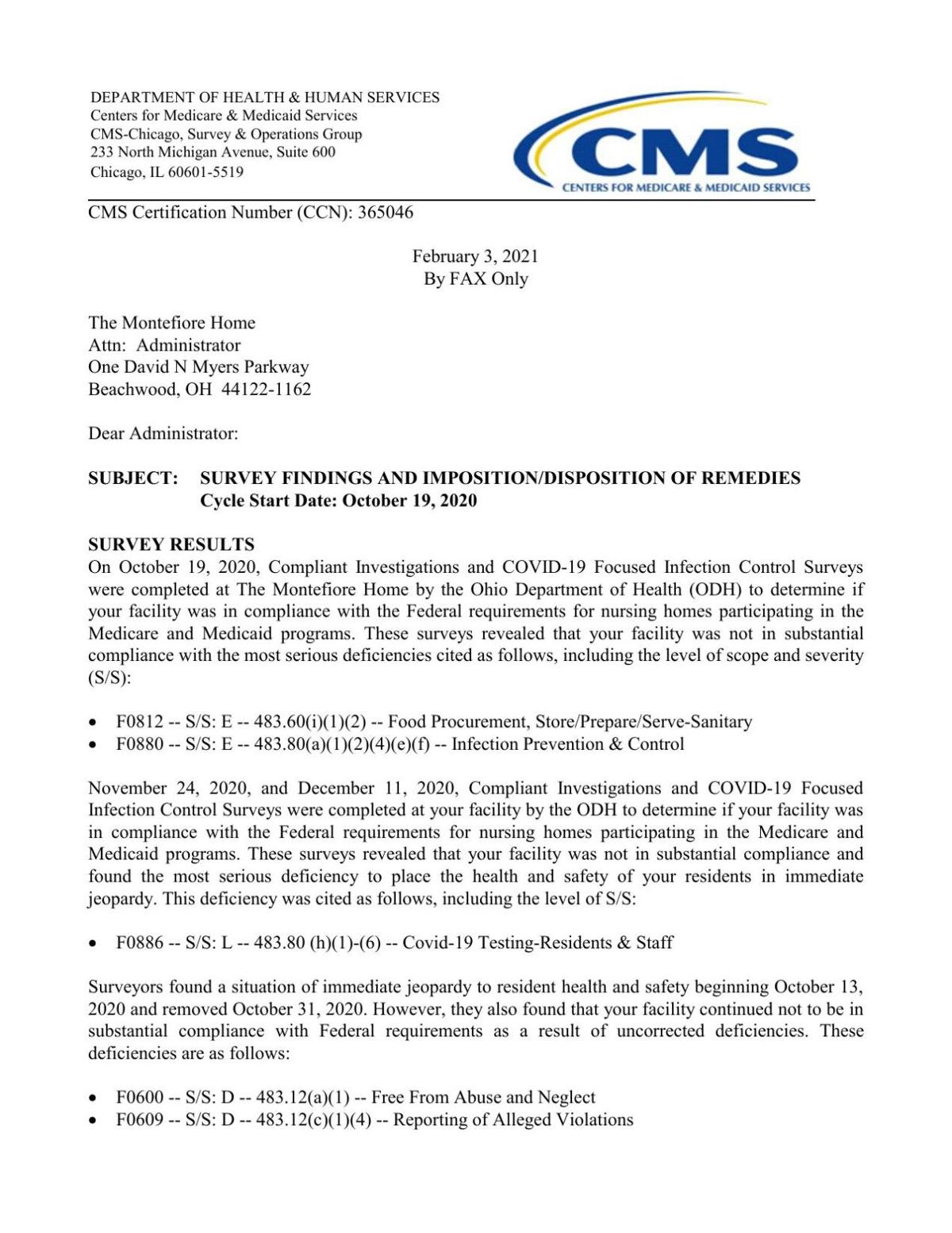 ProPublica lists fines of nursing homes in Ohio and across the country from April 2019 through January 2021. As of that date, one Columbus nursing home, Bella Terrace Rehabilitation and Nursing Center, had total fines of $398,556. Of Ohio’s 953 nursing homes, 750 had infection-related deficiencies, according to ProPublica. ProPublica also logged $6.77 million in penalties to Ohio nursing homes in that timespan.

Holly Fischer, chief legal counsel at the Ohio Board of Nursing, said she could not confirm an investigation into Montefiore.

“Under Ohio law, the board is not authorized to release information confirming or denying the existence of an investigation,” Fischer wrote in an April 27 email to the CJN.

Deborah Veley, executive director of the Ohio Board of Long-Term Services and Supports, said she could not comment on the investigation in an April 27 email to the CJN. Veley confirmed that her agency’s investigation is ongoing. That agency is investigating Hyman, the former administrator.

“BELTSS has no further comment at this time,” Veley wrote in an April 28 email to the CJN.

A spokeswoman for the Ohio Department of Health referred the CJN to the surveys it conducts in an April 28 email.

Lucas Sullivan, deputy press secretary at the Ohio attorney general’s office, said he could not provide any information in an April 27 email to the CJN.

“We cannot comment on nor confirm any investigations being conducted by our office,” Sullivan wrote. “Thanks for understanding.”

Sindell, King and Gelle’s lawyer, had no comment when reached April 27.

Montefiore is bracing for “significant damages” as a result of a falsified COVID-19 testing incident in October, according to an April 12 coun…