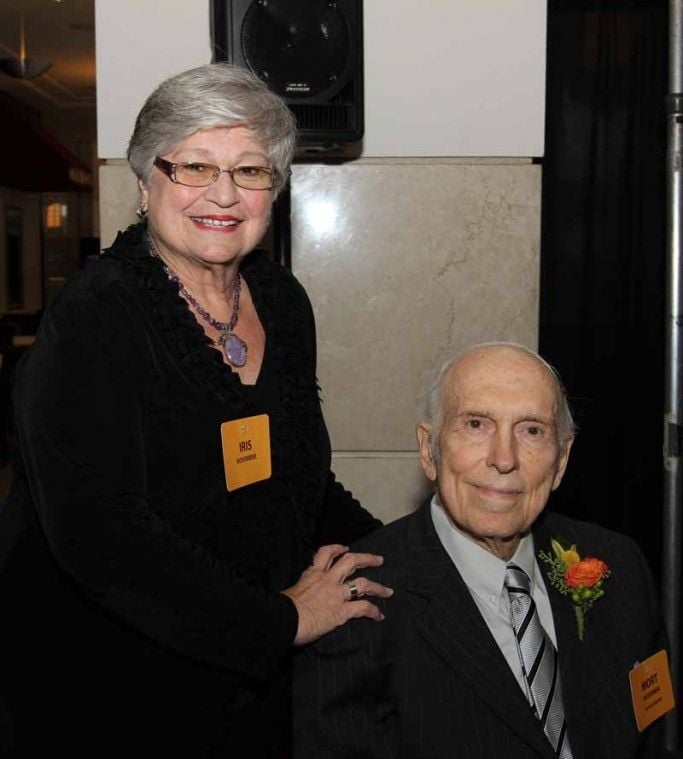 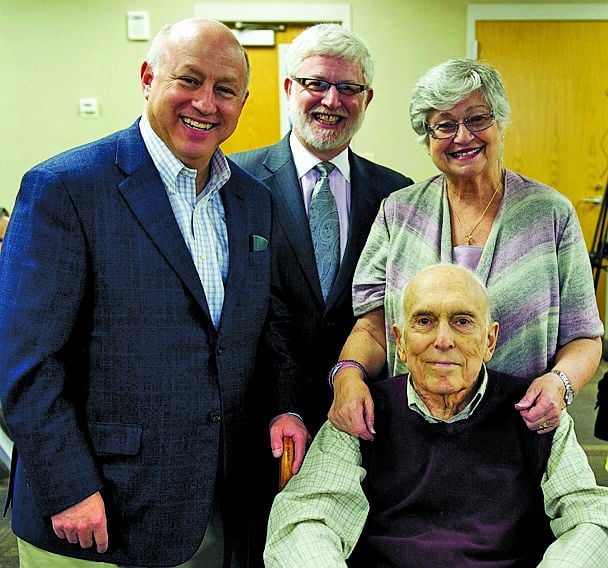 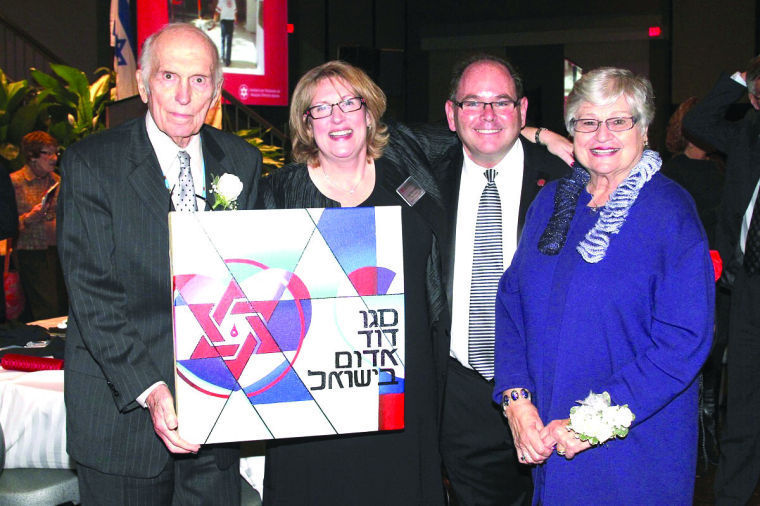 Mort November, from left, Cari Immerman, Barry Feldman and Iris November are shown with artwork made by local artist Hector Vega in November 2013.

Mort November, from left, Cari Immerman, Barry Feldman and Iris November are shown with artwork made by local artist Hector Vega in November 2013.

When Iris Flaxman Hollander met Morton November during the summer of 1979, she was immediately drawn to his offbeat, funny personality.

“He was such a warm, funny, mischievous person,” Iris told the Cleveland Jewish News July 15. “We just hit it off beautifully.”

November, a prominent local philanthropist, died July 12 in Beachwood. He was 88.

A lifelong Clevelander, he began working at his parents’ flower shop at the age of 10. He later enlisted in the U.S. Army and served in Japan at the end of World War II. He eventually joined the Lincoln National Life Insurance Co., where he served as a top salesman for many years before retiring in 1999.

November married Phyllis Tetalman in 1948. They had two children: Larry and Debra Ann.

“He leaves quite a legacy behind,” said Larry, who lives in Orange. “He was very ingratiating and he had the ability to make friends very quickly. I think that was his biggest trait."

Larry, who works as a financial planner at Lincoln Financial Advisors Sagemark Consulting, said he learned many lessons from his father.

“We were in the same business for about 40 years, so I learned how to work by watching him,” Larry said. “I learned the value of hard work and how to treat people.

Following Tetalman’s death in 1979, Iris and November met through the help of their mutual friend, Rabbi David Hachen. The two met for dinner one Wednesday night and became inseparable.

“We spoke every day after that. We never missed a day. It was just magic,” Iris said.

“When we first met, we were very sad people. We had both lost loved ones, but we suddenly found that was made each other laugh. It was an amazing thing.”

November and Iris were married in 1982. Since then, the couple has been leaders in local philanthropy. Many of November’s projects were dedicated to the memory of Debra Ann, who died at age 24 in 1977.

“Both Mort and I have always felt that you do not accumulate money so you can leave it after you die,” Iris said. “You need to spend your money while you’re alive for good things so you can enjoy seeing what happens when you make other people’s lives better. The joy was in the giving and seeing what a difference it could make.”

In memorializing his daughter and supporting projects that benefit children, November’s philanthropy was “singularly focused,” said Hedy Milgrom, chief development officer at the Jewish Federation of Cleveland. Milgrom was introduced to November about 17 years ago when she started at Federation and was assigned to help with the supporting foundation the Novembers had recently created.

“It was one of the greatest assignment of my life to work with Mort and Iris to help shape their philanthropy – though he didn’t need my help. He knew what he wanted to do,” she said. “He knew his goal: to memorialize his late daughter.”

Milgrom and November’s relationship was meaningful to both. So much so that eight or nine years ago, Milgrom said, November asked her to speak at his funeral. Unable to attend due to being away on a long-planned family vacation, she wrote a eulogy that in her absence was delivered by Kelly Rubanenko, Federation’s director of Growing Jewish Cleveland and Young Family Outreach, who also developed a close relationship with the Novembers through their support of PJ Library.

“That’s another thing about Mort. When he makes a commitment to fund a project, it’s more than just money. He’s there emotionally. You become his friend; you become his cause,” Milgrom said. “Over the years, we would get together frequently because it was important to him that I knew who he was personally. His is truly a relationship-based philanthropy.”

The Novembers’ support of PJ Library, which Milgrom said locally distributes 50,000 and 60,000 Jewish books to thousands of area children, marked a shift in their philanthropy, which consists largely of bricks-and-mortar projects. Regardless of what form the Novembers’ giving takes, however, it often has a meaningful and lasting impact, Milgrom said.

“You can look at things (public art) or be in things (buildings) or hold them in your hands (books), and in every case, you can remember Debra Ann – and remember it was Mort’s generosity that made it happen,” she said, adding it was an “honor and privilege” to work with November.

“He leaves a legacy of optimism – how to make lemonade out of lemons ¬– and one of generosity – how a man of very humble beginnings worked hard and saved well, and then devoted all of his resources to making life better for so many children in so many different ways,” Milgrom said. “I can’t express how much I will miss him, personally and professionally.”

November and Iris were involved in the design of the “Where Dreams Come True” statue at Rainbow Babies & Children’s Hospital in University Circle. The sculpture, which was designed by local artist Hector Vega, was made in memory of Debra Ann.

“Mort truly had a passion for inspiring philanthropy in others,” said Patricia DePompei, president of UH Rainbow Babies & Children’s Hospital and UH MacDonald Women’s Hospital. “For those of us who had the privilege of having the opportunity to get to know Mort and Iris, not only were they generous in their philanthropic gifts but they were generous with their time and advocacy and support.”

About a week after DePompei was appointed president of the hospital in October 2012, she said she received a package in the mail that contained a red manila folder.

“Mort had cut out an article about me in The Plain Dealer along with my photo and highlights from the article, and he wrote a loving note inspiring me to be my best and letting me know there’s a community of support for people who take on such roles," she said.

"That’s the type of person he was. He was just so generous and giving and very humble in terms of his own philanthropy. He leaves a legacy that will go on forever in our community.”

Kate Brown, MetroHealth System’s vice president of foundation and system philanthropy, said November’s relationship with MetroHealth started in 2010 when he and Iris donated “Grow Love,” a sculpture consisting of colorful heart-shaped flowers, also by Vega, that welcomes visitors to the outpatient Women’s and Children’s Pavilion at MetroHealth’s main campus in Cleveland.

It was the Novembers’ first donation on the city’s West Side. Then, in 2012, the Novembers – along with Larry and Linda November – made what remains one of the largest individual gifts the system has ever received: $1.5 million, which led to MetroHealth’s then-not-yet-finished 57,000-square-foot facility to eventually be named the MetroHealth Middleburg Heights November Family Health Center.

Opened in 2013, the health center is “exceeding expectations in terms of being a point of access for care in that part of Northeast Ohio,” Brown said.

“When I think of Mort, I think of someone who continually demonstrated a deep understanding of the community and a kindness for the community,” she said. “I think one of the most lasting things he’s given to MetroHealth is the engagement of his family. Larry is involved, his grandchildren are involved, and his brother is involved. … The legacy he created is really quite extraordinary.”

The Novembers also were longtime supporters of the Mandel Jewish Community Center in Beachwood. Early this year, Mort and Iris contributed a lead gift to go toward construction of a new outdoor aquatics center at the Mandel JCC’s Anisfield Day Camp site in Burton.

“Mort November loved children and they were his highest priority,” said Michael Hyman, executive director of the Mandel JCC. “His impact on the children of our community and the community as a whole was tremendous.

“How fortunate we at the Mandel JCC were to have had Mort as a friend and supporter for the work that we do with children and their families. He will be greatly missed by his many friends here at the Mandel JCC.”

“Mort November was a true champion of Cleveland Clinic’s pediatric patients and their families,” said Nelson Wittenmyer Jr., vice chairman of Cleveland Clinic Philanthropy Institute. “Many of his gifts, made in memory of his beloved daughter, have helped countless children. These gifts include The Debra Ann November Wing for youngsters with autism as well as The Debra Ann November Pediatric Airway and Pulmonary Mechanics Lab for those who have breathing and pulmonary issues.”

“I think our community has lost someone who truly has made an impact in the lives of so many,” she said. “There were so many charitable organizations that he and his wife, Iris, were focused on in helping people improve their lives and better their health. The focal point of their philanthropy was to positively impact as many lives as they could touch.”

In 2013, the American Friends of MDA’s David Mark Berger Chapter – Northeast Ohio honored Iris and Mort November at its Celebration of Life Gala at Executive Caterers at Landerhaven in Mayfield Heights. The Novembers were recognized for their support of a campaign to build a new underground blood center that will provide Israel with a safe and secure blood supply.

“Their donation and philanthropy helped bring in other donors,” Immerman said. “It helped spur others to join this campaign and support the cause.”

Immerman said she will miss November’s dry wit and sense of humor.

“He and I just often had good chuckles together,” she said. “We had a true friendship that extended far beyond a donation or an event.

“I speak on behalf of our entire American Friends of Magen David Adom family that our thoughts are with Iris and their family at this time. What a legacy he has left behind.”

After being married for 33 years, Iris said what she will most miss about November is his laughter and the sense of silly that he brought to her life every day.

“This morning (July 15) I was very sad when I woke up because I was realizing that I have to face the truth that I lost him,” Iris said, “but honestly when I look back and talk about him I start to laugh because of his funniness and his passion to do things for other people.

“He always made others smile. No one could walk up to him and not smile at his face. He was the king of silly in only the nicest of ways. He’s really going to be missed.”