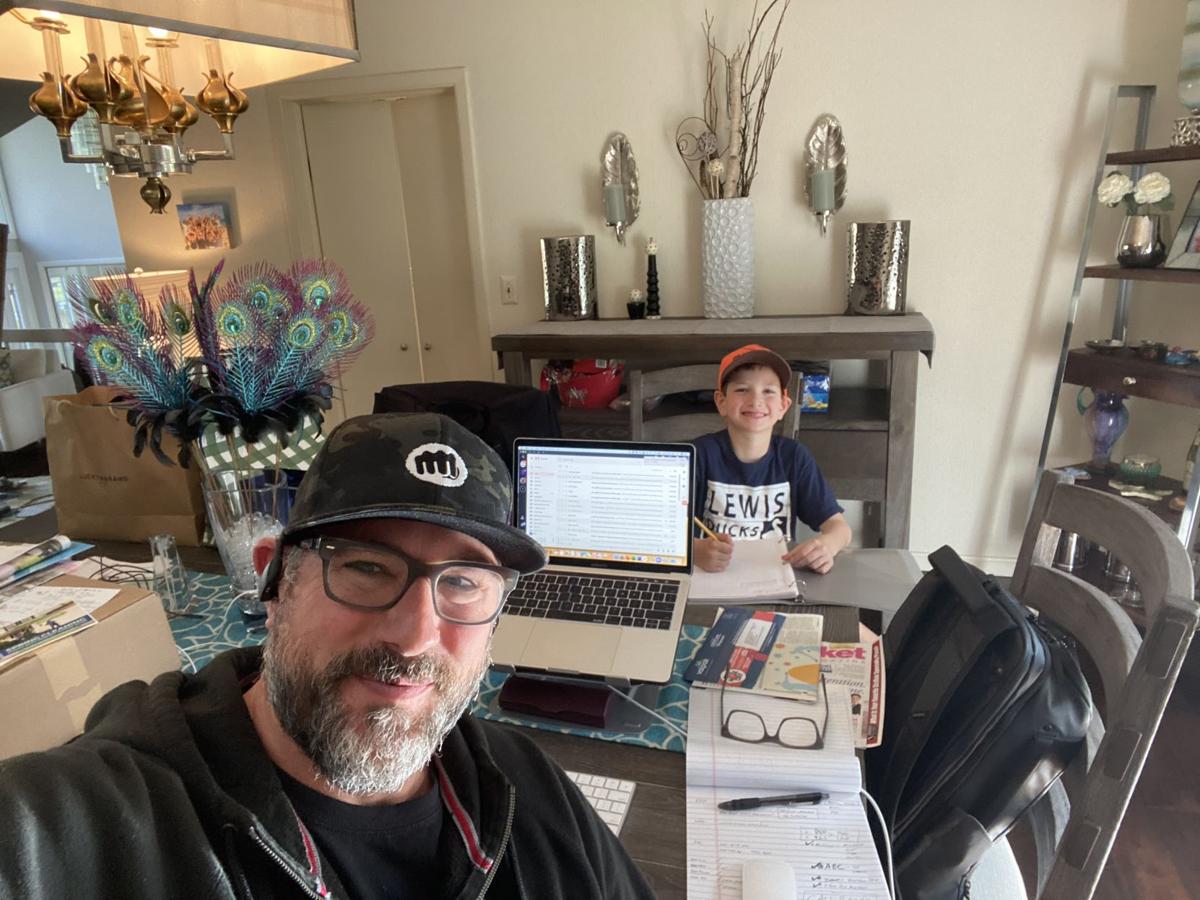 Todd Berk, owner of Mean Joe Advertising, has done some of his work at his dining room table while his youngest son, Luke, does school work while on Zoom with his teacher and classmates.

“On the morning of March 16, we had a little huddle at the office and we got all our projects in line,” said Berk, who attends Anshe Chesed Fairmount Temple in Beachwood. “We already use this project management software when we’re in the office regularly. It’s very beneficial – and it’s the primary contact for all our clients, who we call partners. We made sure that every project we had going was documented in there properly with all tasks assigned to the right people.”

Following the meeting, Berk said everyone was out of the office and working at home, and have been since. Though the workload may be the same, he said employees are working more and more rapidly due to always being connected.

“It’s just that when you find yourself working from home, you find yourself working earlier and then staying later,” Berk said. “For me, it’s communication with partners in the evening, after dinner and all hours of the night sometimes. So, because of the nature of what we’re doing for our partners and because of the state they’re in, I’m still trying to figure things out.”

Berk said that staff still collaborates to the best of their ability. With frequent video calls in Google Hangouts and internal messaging through programs like Slack, he explained it was important to still be able to work together. Though collaboration has been high, Berk said he and the staff are missing the face-to-face interaction.

“We’ve been knocking it out and doing a great job,” he said. “But I don’t want this to be the norm. It’s sometimes easier to walk a couple of steps away from your office to the next one to talk to someone rather than doing it via Slack, email or text. I’d much rather be together, but we’ll wait until it’s necessary. We won’t rush back in.”

When it comes to supporting the community, Mean Joe Advertising is prepared to assist their partners, should a good opportunity arise. But for Berk specifically, helping out doesn’t end at Mean Joe.

The Solon resident also owns and operates High Street Tees with his father, mother and wife. An online store that sells nostalgic T-shirts paying homage to defunct establishments integral to The Ohio State University culture, Berk said he saw an opportunity to make a difference. Every year, senior students at Ohio State take part in the Death March, a pub crawl at local campus establishments. Because it’s not happening this year, High Street Tees created a shirt that calls back to the tradition.

“A lot of people wear white T-shirts and carry markers for people to write all over it, so we created a version of that shirt which highlights some of those establishments throughout the years that would’ve been on the crawl,” he said. “So, we decided to release it in honor of the seniors who can’t do it. We’re going to donate a part of the proceeds to relief efforts.”

Though the future is uncertain, Berk said he’s clear about one thing – Mean Joe will weather the storm.

“We’re going to be fine and possibly even in growth mode,” he said.