Members of University Heights’ government seem to sing a common refrain about University Square, the shopping plaza on the corner of Cedar Road and Warrensville Center Road, frequently using the following adjectives to describe the troubled property that was originally built in 2002:

However, for the first time in years, the city has a serious proposal to renovate the plaza, courtesy of brothers Lance and Brian Osborne, which would reduce the retail space and parking available. Under the proposal and according to marketing materials provided by The Passov Group, the Osbornes would remove the top two floors of the site’s parking garage, demolish a larger retail building along Cedar Road and replace it with freestanding retail or restaurant buildings, and a vacant shopping center on Warrensville Center Road near Macy’s would be converted into a senior housing facility.

The Macy’s and Target stores at the location are owned by the retailers and not included in the sale, and an Applebee’s restaurant, and three freestanding bank locations - Citizens Bank, KeyBank and PNC Bank - would remain as well. 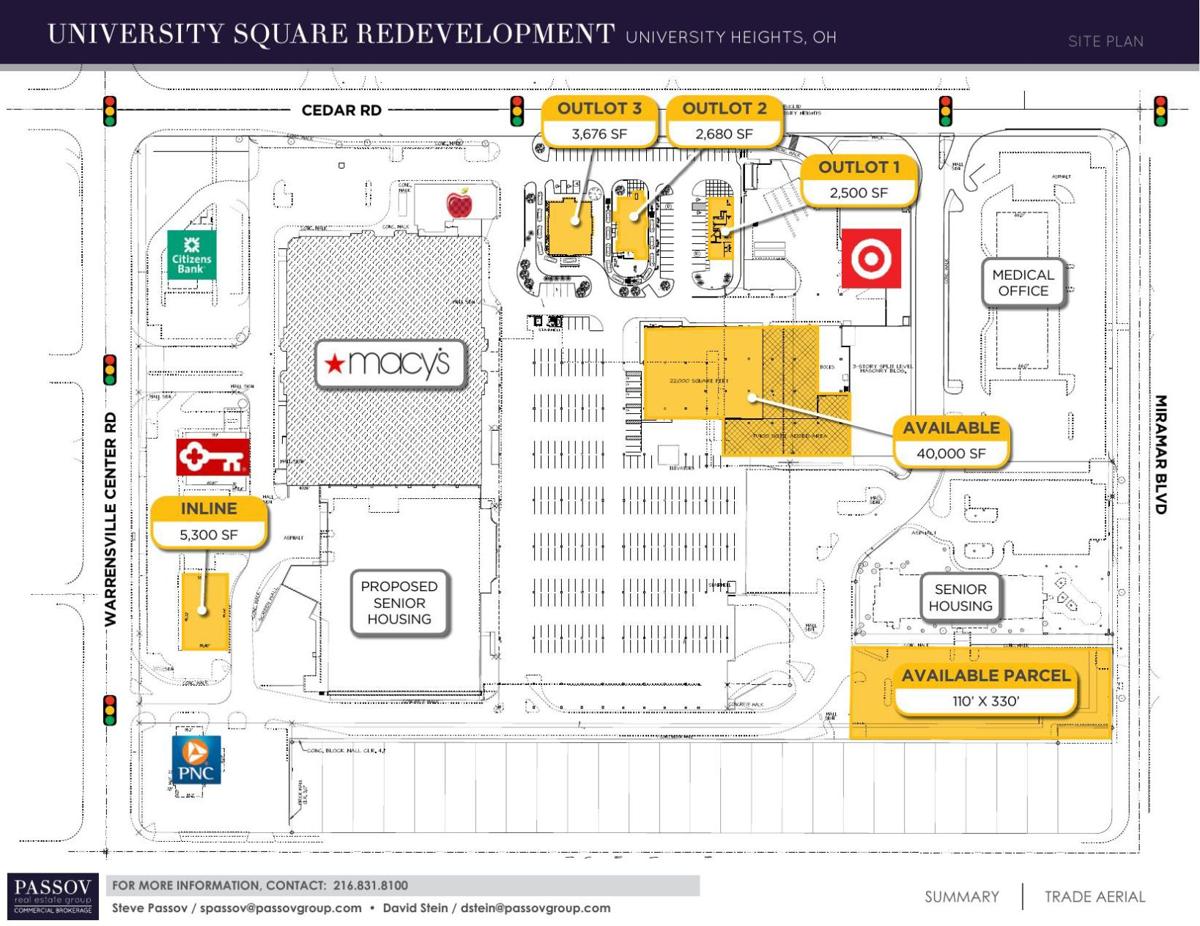 University Heights Mayor Michael Dylan Brennan cautioned that though the Osbornes have signed a letter of intent to purchase the property, it’s not a certain deal yet and still preliminary.

The city doesn’t own the property, but still needs to pass legislation to repeal special assessments passed by the city in 2001 to eliminate liens on the property, essentially removing most of the debt.

“There are a lot of players here (to this deal,)” Brennan said. “There’s (tax-increment financing) that we’re going to need to undo. There is the question of the special assessments which are basically money that the bondholders owe themselves at this point. It’s really just a figure on a ledger and not real money or real debt, except that it exists and it needs to be addressed. The project itself, I think right-sizes the use for the space.

“University Square, in my opinion, was overbuilt when it was conceived. I think the city tried to do too much in one space and it didn’t work. At the same time, Macy’s and Target do rather well despite the vacant space around them. We have a great base here to support proper economic development on the space. The Osbornes have a vision for something I believe will work and would be welcome here in the community. The plans are far from final, there are some additional things I’d like to see in there by way of adjustment ... I’d like to see it be a little more pedestrian-friendly. I’d like to see a little more green space. There seems to be a premium on automotive drive up and parking around the out parcels, when we already have a parking garage.”

On Oct. 10, the University Heights finance committee approved the ordinance to go to council.Council tabled the ordinance at its Oct. 15 meeting and is expected to consider it at its Nov. 5 meeting.

“We’d like to close in early 2019,” said Lance Osborne, adding the brothers are in talks with a “slew” of companies to fill the proposed retail spaces. “The bond documents will go to University Heights (city council), our site plan will go to the University Heights planning commission ... in the next few months. I just really think the original design was flawed, so we’re trying to clean up the mistakes that were made.

“We feel our plan is the best plan to make that a vibrant corner again. It’s depressing driving through that garage. Our plan to eliminate (floors four and five of the parking garage) makes it feel like you’re pulling into a regular suburban shopping center.”

Steve Passov, the owner of The Passov Group, said his company is the brokerage company, representing the legal entity the Osbornes will form to close the sale of the property. He echoed Lance Osborne’s belief that the location of University Square is key.

“I think this is probably one of the more important intersections in the Northeast Ohio market, from a density and education level,” Passov said. “We had worked with Whole Foods (across the street) and located them many, many years ago. Some of their key demographics are just that, highest density of educated population. So, I think this corner, that fortunately and unfortunately, as you see in all the redevelopments in and around this quadrant, everything has been successful, and this one is just in dire need of a redevelopment.”

“That space has been vacant and an eyesore for so long that the city’s excited to redevelop it, and we’re hopeful this developer will follow through because there have been other ones that have fallen through,” Weiss said. “We have a lot of great economic development happening currently and we’re hoping this is one step closer to fulfilling those empty spaces over there. I think it’s good for the city, I think it’s good for the county, the surrounding space as well.”

She said the proposal isn’t finalized, and ideally, a mixed-use space would be “the best” for the area.

“That area though, that lot, has so many issues with that parking garage and access to Target and Macy’s that there are a lot of hindrances for developers,” she said. “I think this is a great first step, I’m hoping it does go through and there is opportunity there for a small box store there as well as assisted living or some type of nursing facility, so at least we get the payroll from that.

“I would have loved a little more commercial, but I think this is a great option and I hope we move forward on it. University Heights has a lot of momentum right now in terms of economic development ... we’re actively working on the empty spaces throughout the city ... these are all amazing opportunities for the city right now.”

“The original project was ambitious in its scope and I appreciate what the last developer tried to do back in the early 2000’s,” Brennan said. “It ended up not working out. We’ve taken some lessons, I suppose, from what worked and what didn’t, in order to create a right-sized and modern space which I hope will be community-oriented and return this valuable, well-trafficked commercial area to use, not only to residents of University Heights, but to the greater East Side surrounding community.”