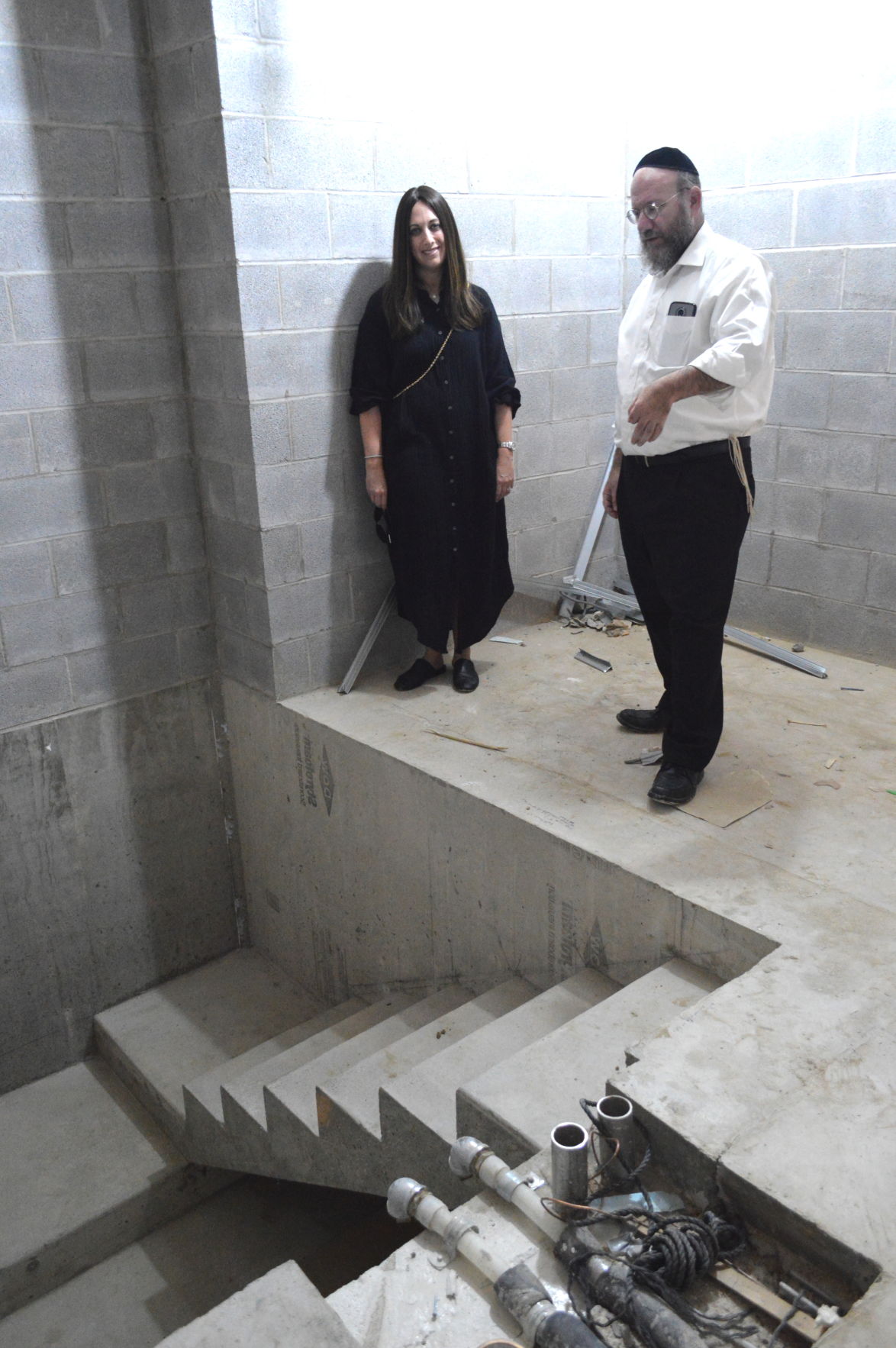 Chany Klein and Rabbi Avrohom Adler stand at the top of one of two immersion pools. 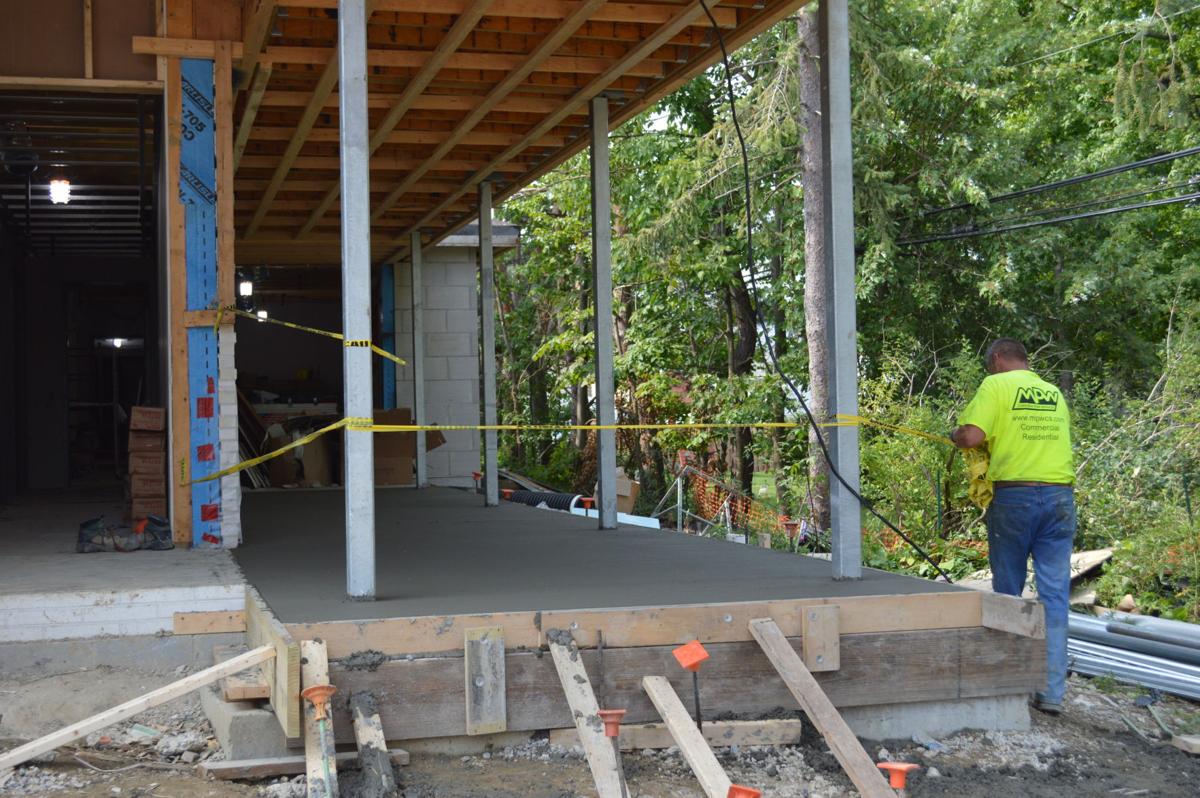 A worker pours concrete in the entrance area of the Cleveland Community Mikvah building. 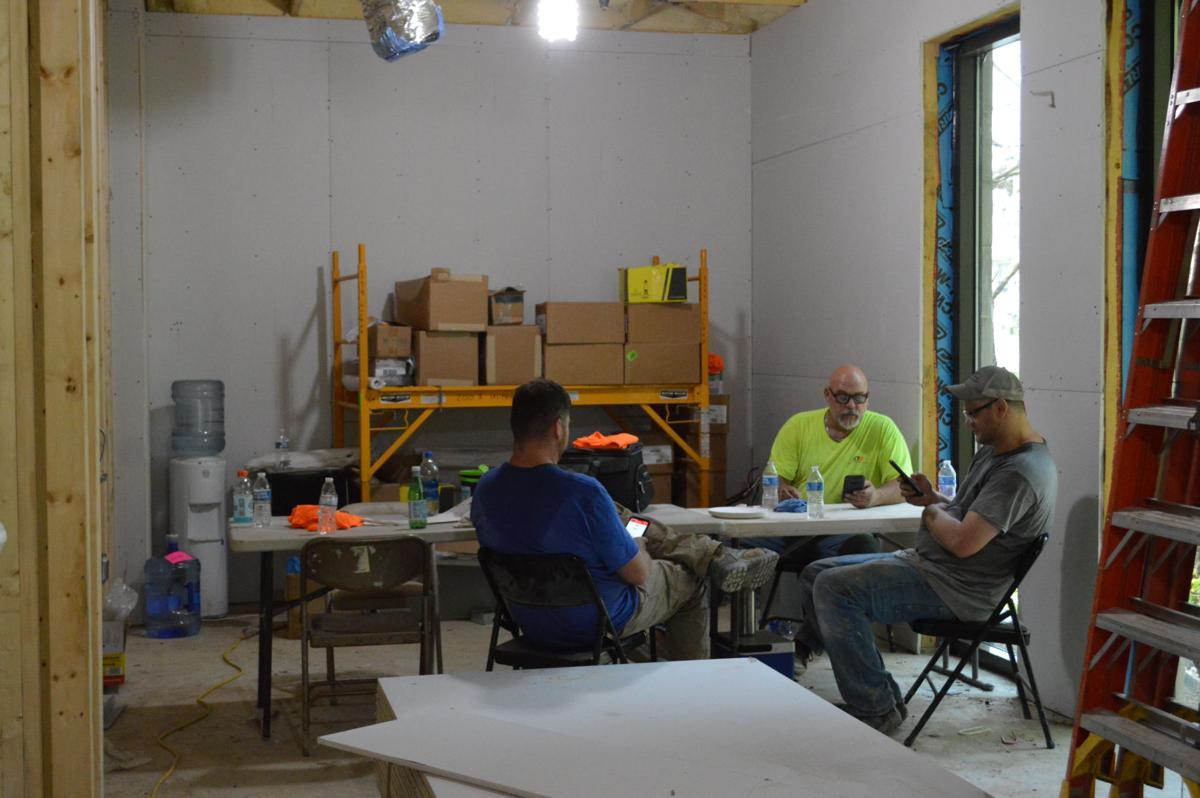 Contractors have their operations set up in what will be the reception and waiting area. 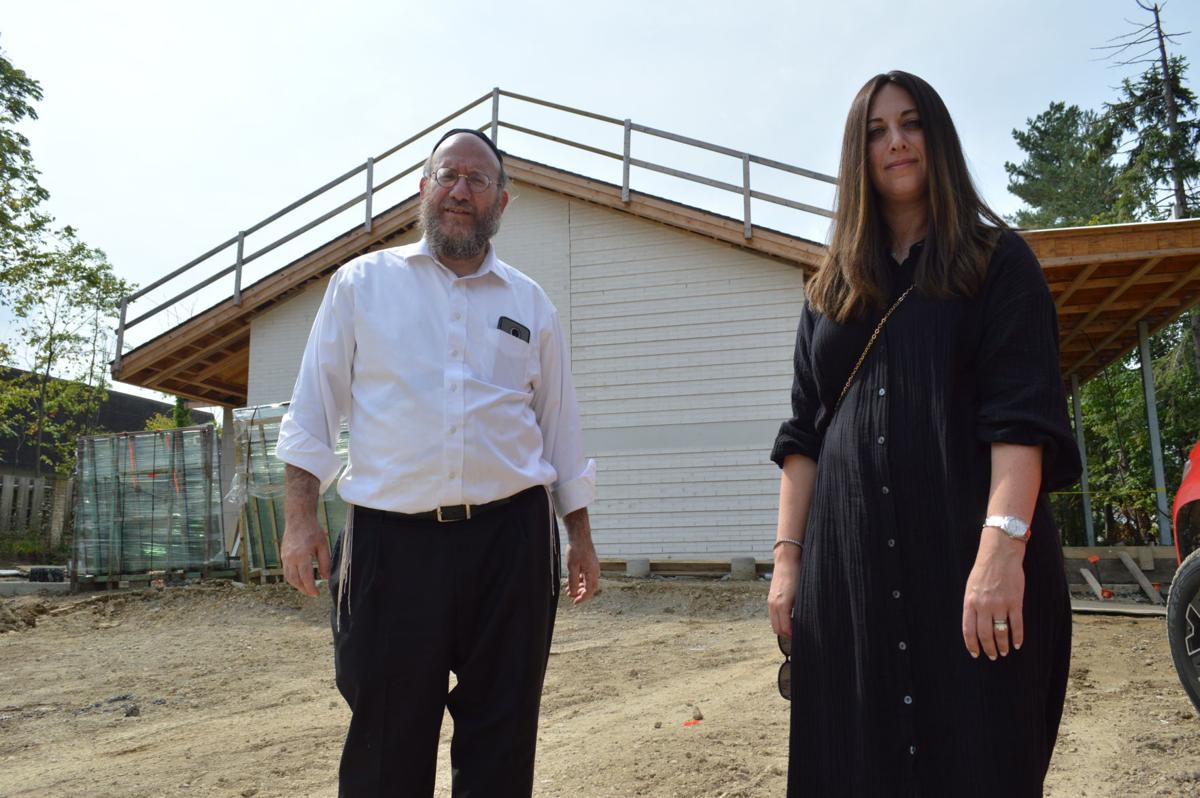 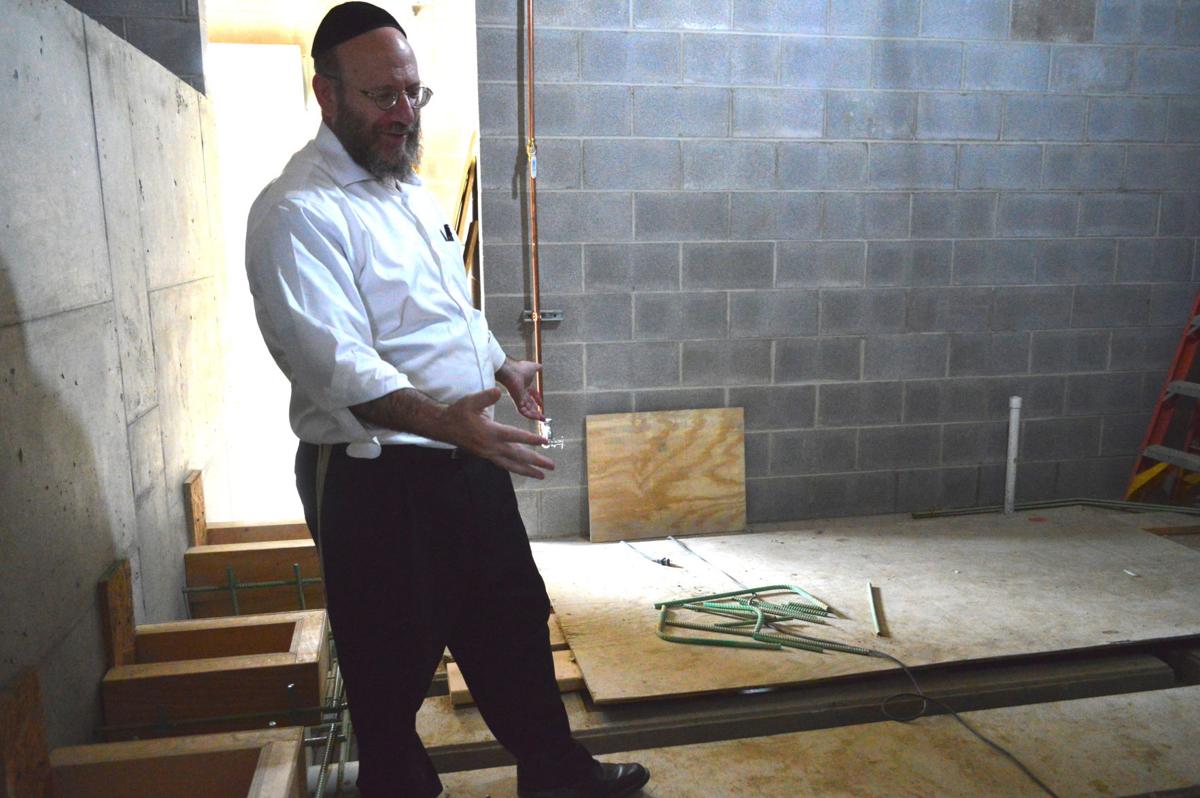 Rabbi Avrohom Adler stands in front of the rain vessel and shows the underwater feeding troughs, currently covered with plywood to protect them from contamination. 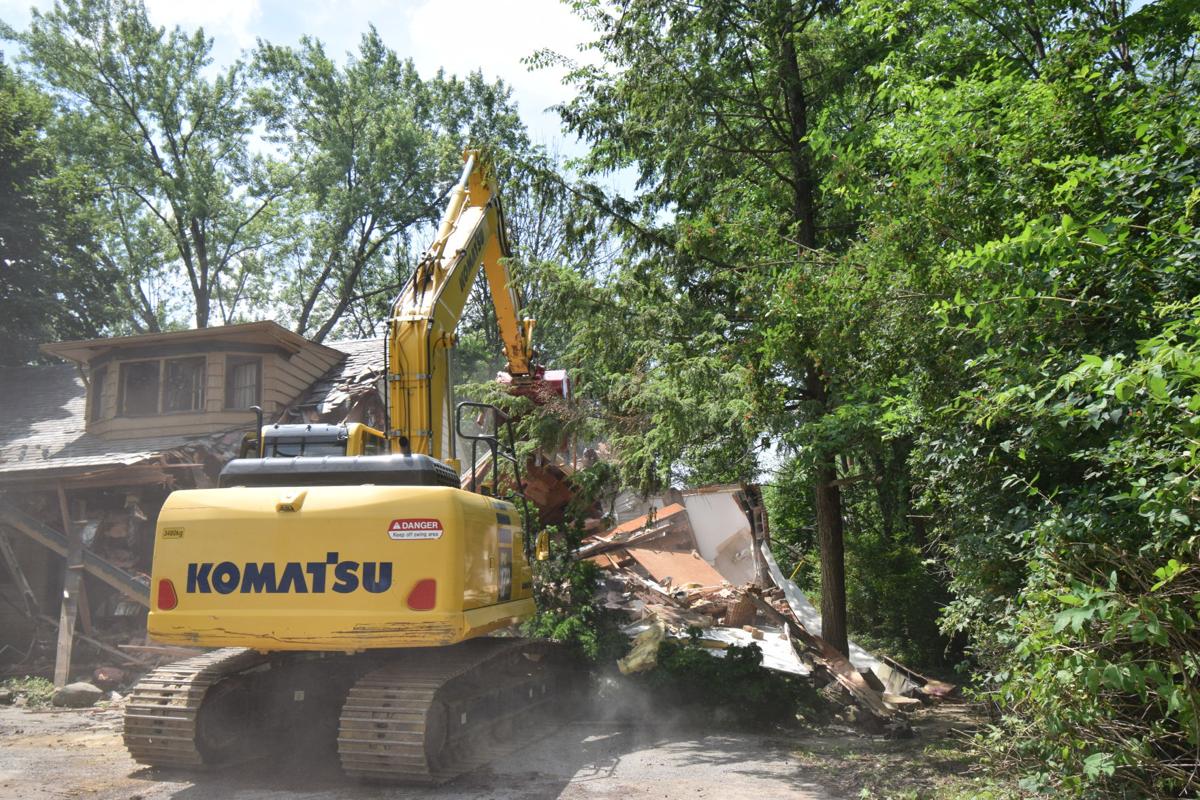 A house is demolished in June 2018 to make way for a new mikvah.

Chany Klein and Rabbi Avrohom Adler stand at the top of one of two immersion pools.

A worker pours concrete in the entrance area of the Cleveland Community Mikvah building.

Contractors have their operations set up in what will be the reception and waiting area.

Rabbi Avrohom Adler stands in front of the rain vessel and shows the underwater feeding troughs, currently covered with plywood to protect them from contamination.

A house is demolished in June 2018 to make way for a new mikvah.

A women’s mikvah in University Heights, under construction for nearly a year, is set to be finished by the end of 2019 and to open once its two immersion pools are filled with rainwater in early 2020.

The 6,100-square-foot structure will contain a reception and waiting area, 14 preparation rooms with bathtubs or showers, including one that is handicap-accessible and another that is designed for the use of a bride, with a waiting area for her mother.

“Before a woman immerses, they do take a bath,” said Rabbi Avrohom Adler, vice president of the Cleveland Community Mikvah. “Some of them take a bath at home for their convenience so they would come and use the shower.”

Adler said fundraising is ongoing, with some $2.9 million raised from 750 donors for the $3.8 million project.

The structure at 2588 S. Green Road, designed by Vocon of Cleveland, is being built by Millstone General Contracting LLC of Cleveland.

Since planning began, construction costs are running higher, partly because of tariffs. Adler said much of the soil at the site had to be replaced prior to construction because it wasn’t suitable for building, which had not been foreseen.

The project first began to be talked about in 2015.

Each preparation room will contain two doors, one to an outer hallway, known as a dry hall, and the second to an inner corridor leading to the mikvah, known as the wet hall. The arrangement will allow for privacy for women on their way to and from the immersion pools.

When the mikvah is in use at night, a receptionist will greet those entering the mikvah. An attendant will accompany them. In addition, there will be a person to maintain the mikvah and do laundry. It will have a washer and dryer on site.

Zoned radiant heating is being installed under the floors of the mikvah.

“It’s like a spa experience for the women because they’ll have beautiful bathrooms. … The radiant heating makes it so … pleasant, getting out of the bath,” said Chany Klein, a member of the executive committee of the Cleveland Community Mikvah.

The building is designed so that the rainwater that falls on the structure’s roof will be tapped for use in the immersion pools. It will be collected in a rain vessel, where it will flow into four underground feeder pools into the immersion pools. A cork system will be used to allow water to flow from the rain vessel into the feeder pools. If the rain vessel is full, there will be a system that to allow excess water to drain off.

“For a mikvah to be kosher, it has to have … between 180 and 250 gallons,” Adler said. “So this contains close to six times the amount of what’s needed.”

Each immersion pool will contain 2,000 to 2,500 gallons of water. The rain vessel, which can be thought of as a holding tank, will hold 1,800 gallons.

“Once the mikvah is completely finished, then we’re going to begin collecting water. We don’t collect water while there are people still here because the law is the mikvah has to be filled with rainwater first. If any other water, any other liquid, comes into the mikvah first, it disqualifies it. So if we have a worker who takes his Snapple can or Pepsi can, throws it in before the mikvah is filled, it will invalidate it forever, unless we drain it. Once all the workers are out, there won’t be any corks here for a technical reason, we’re going to have the rainwater come and then automatically fill up the mikvos. That will take time, especially because it’s going to be in the winter.”

Women will exit on the side of the building through a different door than the entrance to the building. Outside, there will be trees, landscaping and lighting.

There are four other mikvahs in Greater Cleveland.

Klein spoke of the need in terms of the mikvah at Waxman Chabad Center in Beachwood.

That building has four preparation rooms.

“I just know from personal experience that the waiting room is always full. It’s a little small that everyone sits there waiting,” Klein said. “The rooms open straight into the mikvah area.”

Adler said there are often 12 to 15 women who need to use the mikvah each night and on some nights that number rises to 20, which runs the mikvah into overtime and means longer waits for the women.

“This is an upgrade,” Adler said. “It’s a spiritual evening. And we want it to be a nice serene experience.”

The mikvah will have both annual membership and pay-as-you-go options.

“This is a pampering experience where women can make an appointment for the bath. It’s quiet here, no children around. It’s serene. It’ll be really nice.”

Cleveland Community Mikvah: By the numbers

The Cleveland Community Mikvah is tiled, carpeted, mirrored and undergoing floor grouting in the final weeks of construction of what will be N…