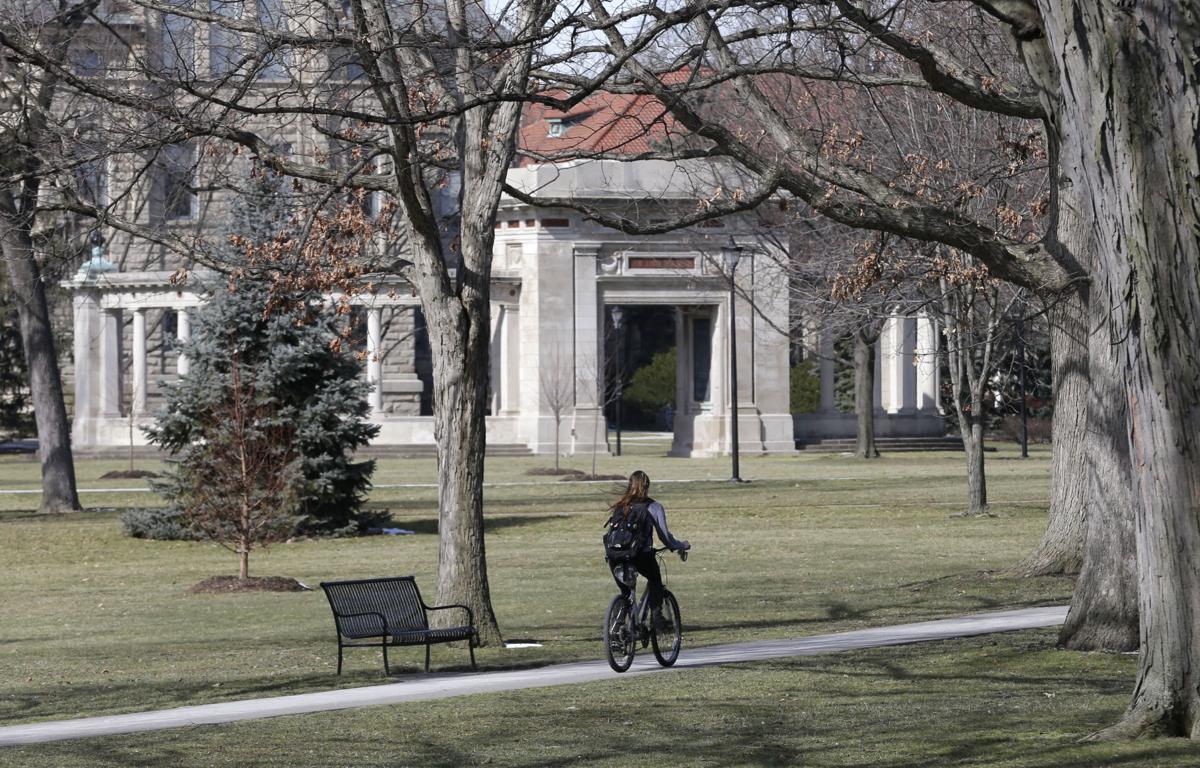 A student rides a bicycle on the campus of Oberlin College in Oberlin, Ohio.

This story has been updated to reflect the Kupermans are not Jewish.

The home of an Oberlin College faculty member was vandalized early Thursday morning, Nov. 17, in what the Oberlin Police Department is investigating as a hate crime.

Benjamin Kuperman, an associate professor and chair of the computer science department at Oberlin College, called Oberlin Police at 3:40 a.m. Kuperman told the police that he and his wife, Elizabeth, were awoken around 3:25 a.m. when they heard a tapping sound outside their home on Eastern Avenue.

Kuperman went outside, where he noticed that sea shells on his porch were smashed and a letter had been placed behind a mezuzah on his door frame. According to the police report, the note was on a ripped piece of white paper and appeared to have letters glued onto it that spelled out "GAS JEWS DIE."

Kuperman and his wife said they have not had any recent issues with anyone from Oberlin College, visitors to their home, or friends and neighbors.

Oberlin College President Marvin Krislov sent an email to students and the college community that same day alerting them to the incident.

“It is with deep outrage and sorrow that we report that one of our colleagues and his family were the victims of a cowardly, hateful act last night,” Krislov wrote in the email. “The outside of their home was vandalized and a note left behind that included anti-Semitic and threatening language.

“As the General Faculty discussed yesterday, this is a moment of great stress and consternation, both nationally and locally. We will need each other’s continued compassion and support at this time; please take care of yourselves, your families and your loved ones. As our community grieves for the loss of dignity and personal/physical safety that comes with these sorts of vile attacks, these events also can galvanize us in our resolve to fight bigotry and hatred wherever and whenever they occur.”

The incident took place two days after the Oberlin College board of trustees voted to dismiss assistant professor Joy Karega over anti-Semitic posts on social media.

Anita Gray, regional director of the Anti-Defamation League, said it is possible that the incident is related to a political event rather than other campus issues.

"We are very concerned to hear about this hate crime perpetrated in Oberlin but are gratified to see that the Oberlin administration has responded in a productive way and is cooperating fully with law enforcement and of course is supporting concerned students," Gray said. "The ADL has provided an initial level of anti-bias education, and we look forward to conducting more in the future."

The incident remains under investigation.