The State Medical Board of Ohio has issued a citation to Dr. Lara Kollab that it intends to impose discipline on Kollab – ranging from limiting her license to permanent suspension as well as the potential for fines.

Kollab’s anti-Semitic tweets were publicized by Canary Mission, which exposes anti-Semitic posts on social media, resulting in her dismissal from her residency at Cleveland Clinic. 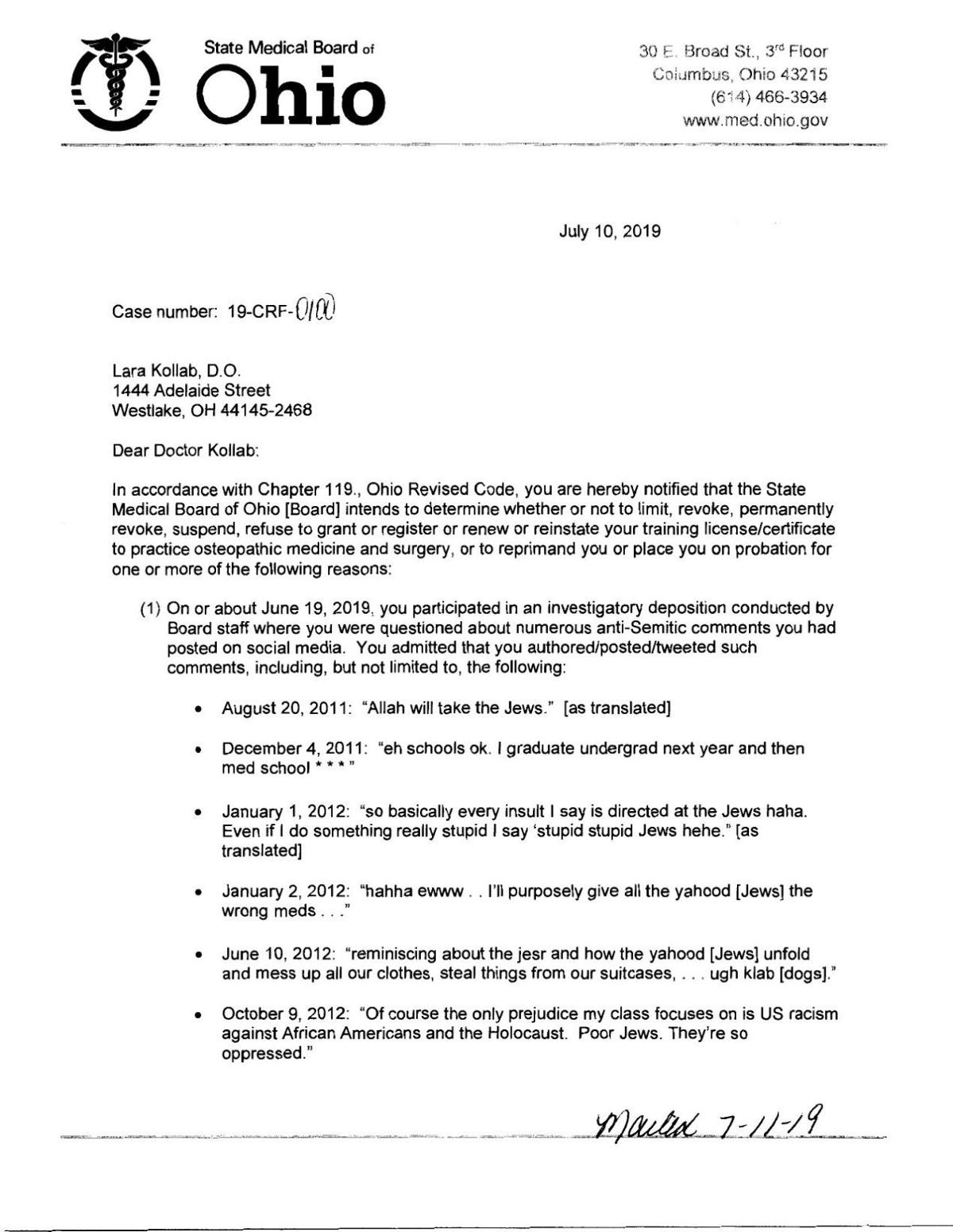 “Although you asserted in your June 2019 deposition that you now feel ashamed of your discriminatory comments, when asked if your tweets reflect good moral character, you admitted that they do not,” Dr. Kim G. Rosenthal, secretary of the medical board, wrote in a July 10 letter to Kollab. “Further, for any violations that occurred on or after September 29, 2015, the board may impose a civil penalty in an amount that shall not exceed $20,000.”

Kollab has the right to request a hearing within 30 days of the notice prior to the state medical board’s action. She had not requested a hearing as of July 22, Pollock said. Her Cleveland lawyer, Ziad Tayeh, said he would not discuss her situation at this time.

“We issue a citation which is basically putting one of our licensees or training certificate holders on notice that they are going to face discipline from the medical board,” said Tessie Pollock, director of communication for the State Medical Board of Ohio. “They have a right to a hearing. So they can request a hearing or we can proceed without one. I can check and see if we’ve gotten that request for hearing yet. And then it’ll be a hearing usually between that person, their attorneys, and then our hearing officers will review all the information and then they offer a report and recommendation to the board. … Then they’ll take formal action on that individual.”

Kollab admitted at the deposition that she posted two tweets in 2011, five in 2012 and four in 2013 that were anti-Semitic.

This tweet, included in the four-page letter and dating to May 4, 2013, reads, “’Studying for my med micro final, came across this. Clearly I pay attention in class and write useful notes. People who support Israel should have their immune cells killed so they can see how it feels to not be able to defend yourself from foreign invaders.’”

Kollab graduated from John Carroll University in University Heights on May 19, 2013, according to the letter, and she told the state medical board that all of the offensive tweets were written when she was an undergraduate student.

Three of the tweets, Rosenthal pointed out, were posted subsequent to her graduation, including this one, from Sept. 13, 2013, also listed in the letter: “’Norm. Jewish. Constantly remind ppl of the Holocaust, relate those who did 9/11 to Nazis, justify Israel’s bloodlust. Disgusting.’”

Kollab graduated from Touro Osteopathic Medical School in June 2018, “which you described as ‘a deeply rooted in the Jewish tradition,’” the letter reads. Kollab admitted in her deposition to deleting the anti-Semitic tweets and “acknowledged that if Touro had known of your anti-Semitic tweets they probably would not have admitted you as an osteopathic medical student.”

Kollab resigned in lieu of termination from Cleveland Clinic Oct. 18, 2018 according to the letter.

“When (Kerns Medical Center in Bakersfield, Calif.) asked you why you left the (Cleveland Clinic) residency training program, you claimed that you had resigned because of a death in the family,” the letter states. “You did not disclose that, in fact, you had resigned in lieu of termination due to your discriminatory social media posting.”

In addition, the letter states that Kollab replied to Canary Mission on Dec. 27, 2018, with the following message: “’That’s a fake account, stop trying to frame me, you psychos. You’re an anonymous website harassing me with a fake twitter profile made of me. Every Jewish and non-Jewish patient I’ve ever had will speak to how much I love and care for ALL of my patients.”

The letter states that Kollab’s actions “constitute a failure to furnish evidence satisfactory to the board of good moral character.”

In addition, the letter states that her acts, “constitute ‘making a false, fraudulent, deceptive or misleading statement… in relation to the practice of medicine and surgery…”

Kern Medical in California released a statement that as of March 15, they had notified Dr. Lara Kollab “that her position as a Post-Graduate-Year 1 resident in the Internal Medicine Residency Program has been withdrawn effective immediately.”