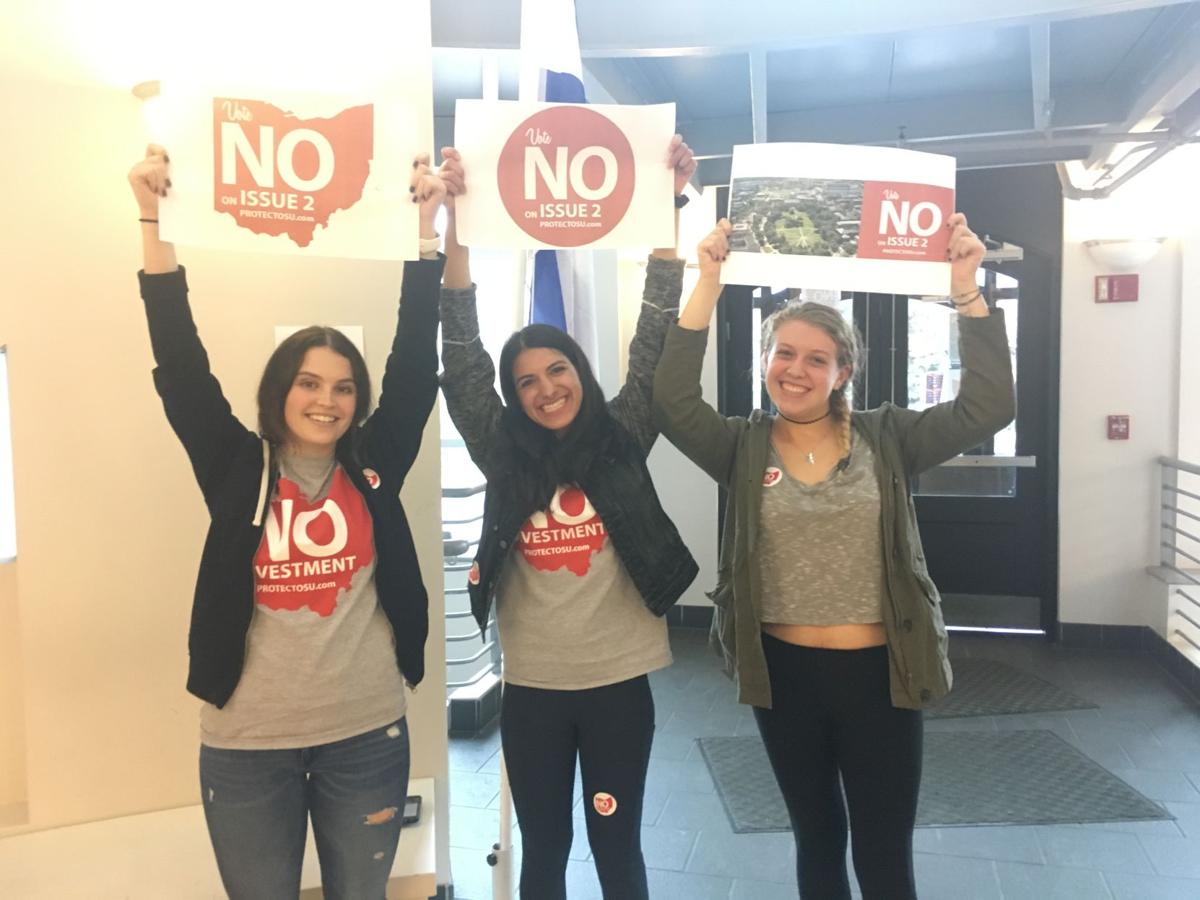 Daniella Israelstam, from left, Maya Spector and Hannah Borow display their opposition against a divestment issue at The Ohio State University in Columbus. 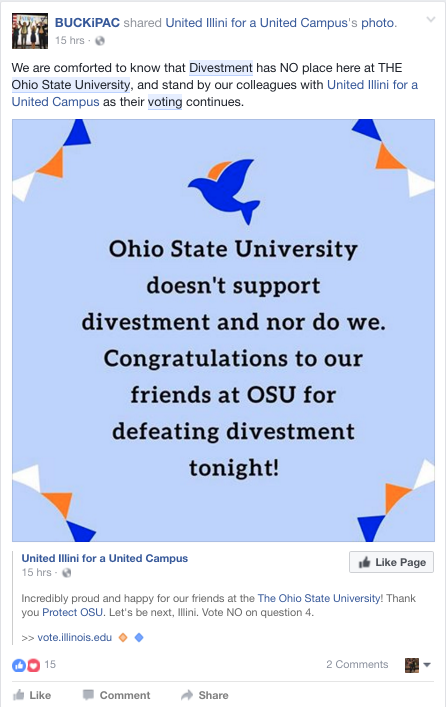 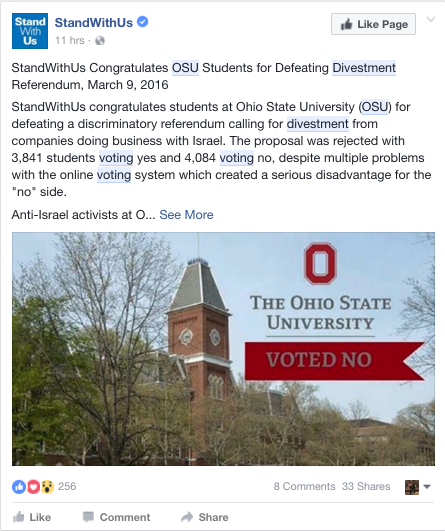 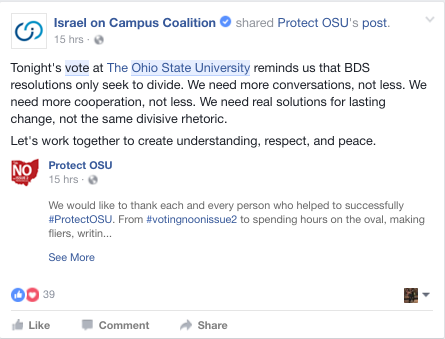 Freshman Hannah Borow and sophomores Daniella Israelstam and Maya Spector, who all reside in Beachwood and are active with Hillel, were taken aback when a group called OSU Divest: Buckeyes for Human Rights circulated a petition on campus under the guise of a humanitarian initiative in an attempt to place it on the undergraduate student government ballot.

The issue received enough signatures to be placed on the ballot and voting was conducted from March 6 to 8. Had the issue been approved, the result would have been nonbinding on the university’s board of trustees.

The ballot read: “Shall the undergraduate student government call upon OSU to cease and/or prohibit any investments in G4S, Caterpillar, CoreCivic, The GEO Group and Hewlett-Packard Enterprise until they are no longer engaged in the violation of human rights and other practices deemed unethical by the Buckeye community?”

“This referendum, making people choose a side, has caused a lot of hostility on campus,” Israelstam said before the results were known. “It is tearing us apart based on different political ideals, political stances. Especially with everything going on in the world right now with anti-Semitism, it is really important for Jews to be united and all this is doing is tearing us apart. It is making this campus so divided.”

Spector said in an emailed statement to the CJN on March 10, “Tonight, I am incredibly proud to be a Buckeye. I am thrilled that the undergraduate student body at The Ohio State University chose not to divest from companies that do business in Israel. It was amazing to see our pro-Israel community come together in the past few weeks at a minutes notice to unite in our love for our Israel and Buckeye communities.

“From tabling on The Oval and distributing fliers to writing testimonies and reaching out to student organizations, our student volunteers sacrificed their time and took a break from midterms and other involvements to help defeat this referendum. We could not have accomplished these results without everyone’s hard work and dedication. When the undergraduate student government announced the final vote, our student supporters were ecstatic. The bursts of joy that spread throughout Facebook posts and private messaging overcame us all.

“Days before the Jewish holiday of Purim, we once again rose above the threats that face the Jewish homeland. It feels amazing to know that when I return after spring break, I will be walking on a campus that stood up for Israel against divestment and protected our Buckeye community.”

Mulitple attempts to reach OSU Divest and student government for comment were unsuccessful.

Pro-Israel students worked to get out their message.

Joseph Kohane, executive director of the Ohio State Wexner Jewish Student Center, said: “Our pro-Israel student activists have worked long and passionately to defeat the BDS referendum. They have conducted a campus-wide campaign, created videos, made smart use of social networking, tirelessly distributed fliers, engaged in countless conversations with students on campus to persuade fellow students to vote no on the referendum, monitored the other side for election-rule infringements and filed briefs with the student judiciary responsible for a clean election when infringements occurred. The voice of pro-Israel advocacy on campus is strong and committed.”

The students said that petitions to support the divestment initiative primarily were circulated on The Oval, a popular area for students to walk through and mull around.

“… People are like, ‘I am not educated on Israel, but it sounds like they are doing very horrible things so I am going to vote yes,’” Borrow said. “It is very misinformed and misleading.”

The women said because they are more informed than many on campus, they were aware of the hidden message.

“I know a lot of people who have been on Birthright or are very pro-Israel, but when someone went up to them asking if they support human rights, obviously they do,” Spector said. “They signed the petition by accident since they did not know the petition was meant to divest from Israel.”

The women said they were upset that the referendum even made it to the ballot because it was portrayed as a human rights issue.

Spector said, “The issue is that because they started off by telling people that it is only about human rights, now we have to defend Israel and explain that it has nothing to do with human rights, it is only about divesting from Israel. It is really hard because when you bring up Israel, it is like an issue because people are not educated about Israel, but they know things about human rights and they don’t want to support any company that is involved in human rights violation. That is all our issue because they were so misleading in the beginning.”

Less than one year after a proposed divestment resolution failed, marking the second time in two years a similar initiative failed at The Ohio…