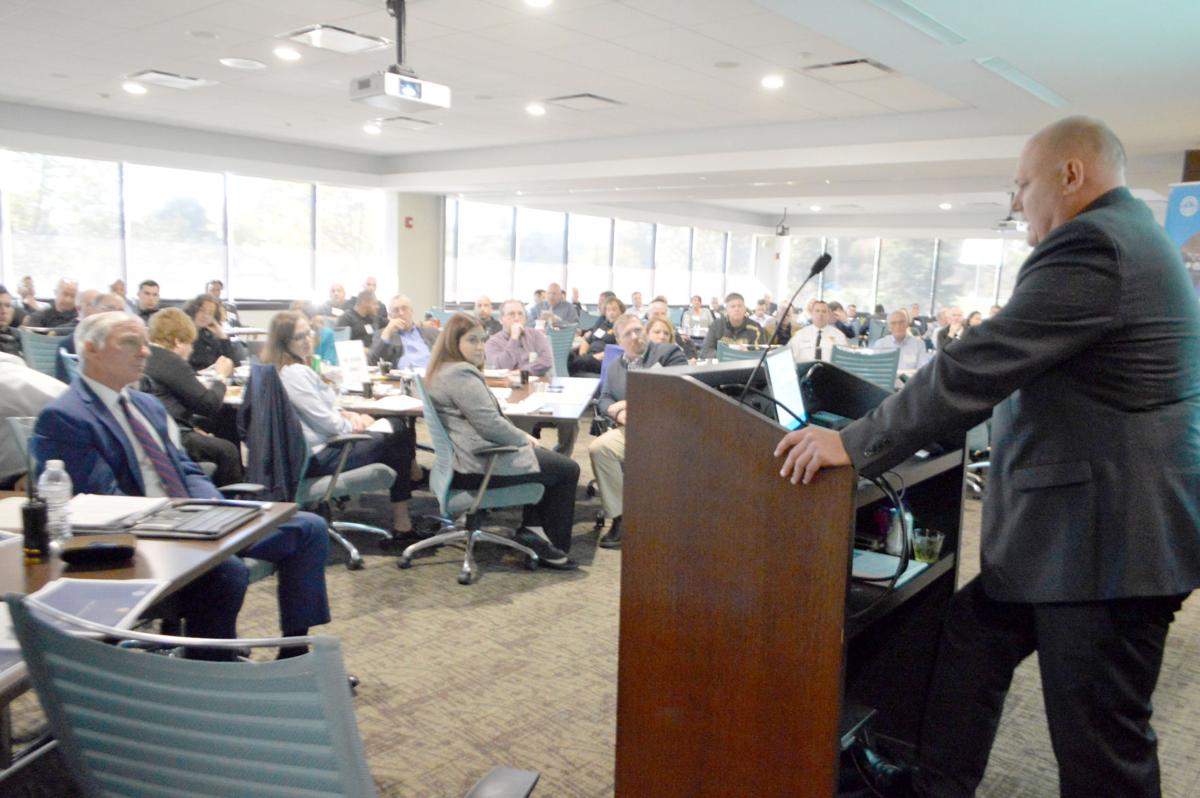 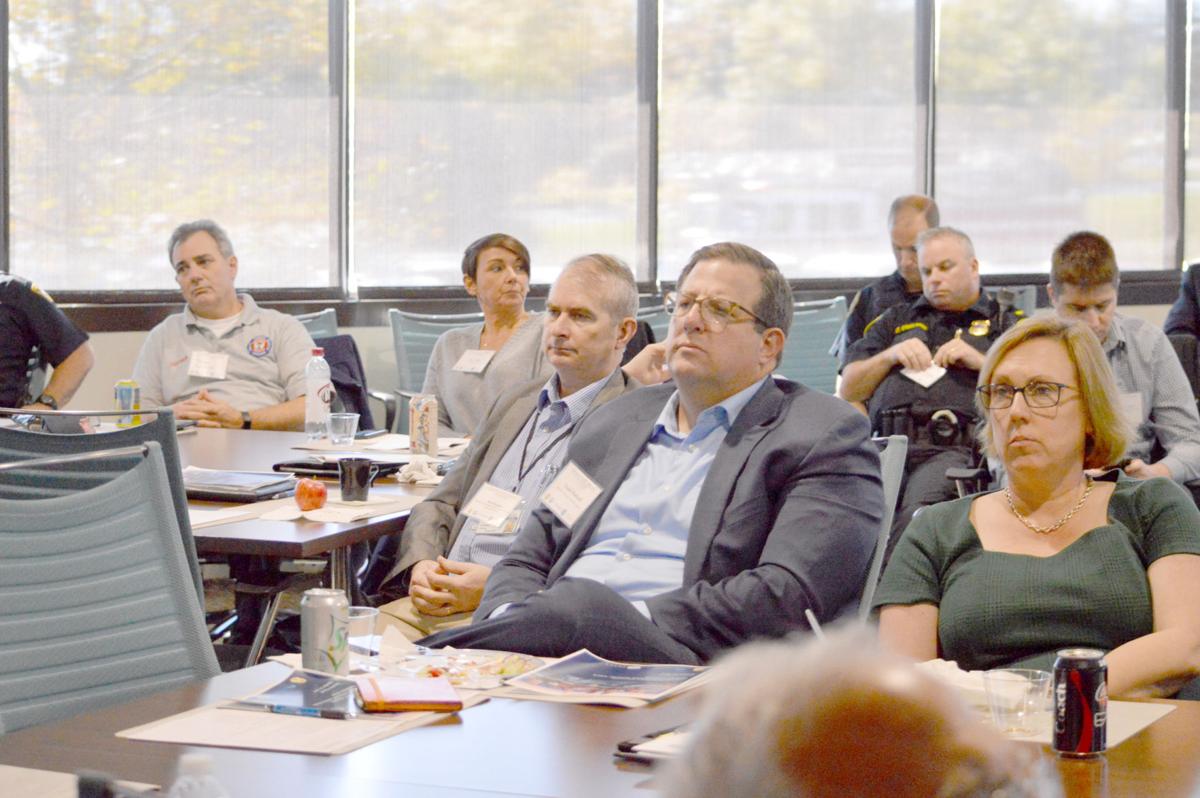 Todd Polikoff, executive director of the Jewish Community Board of Akron, listens to a presentation by Bradley Orsini Oct. 28 at the Jewish Federation of Cleveland in Beachwood. 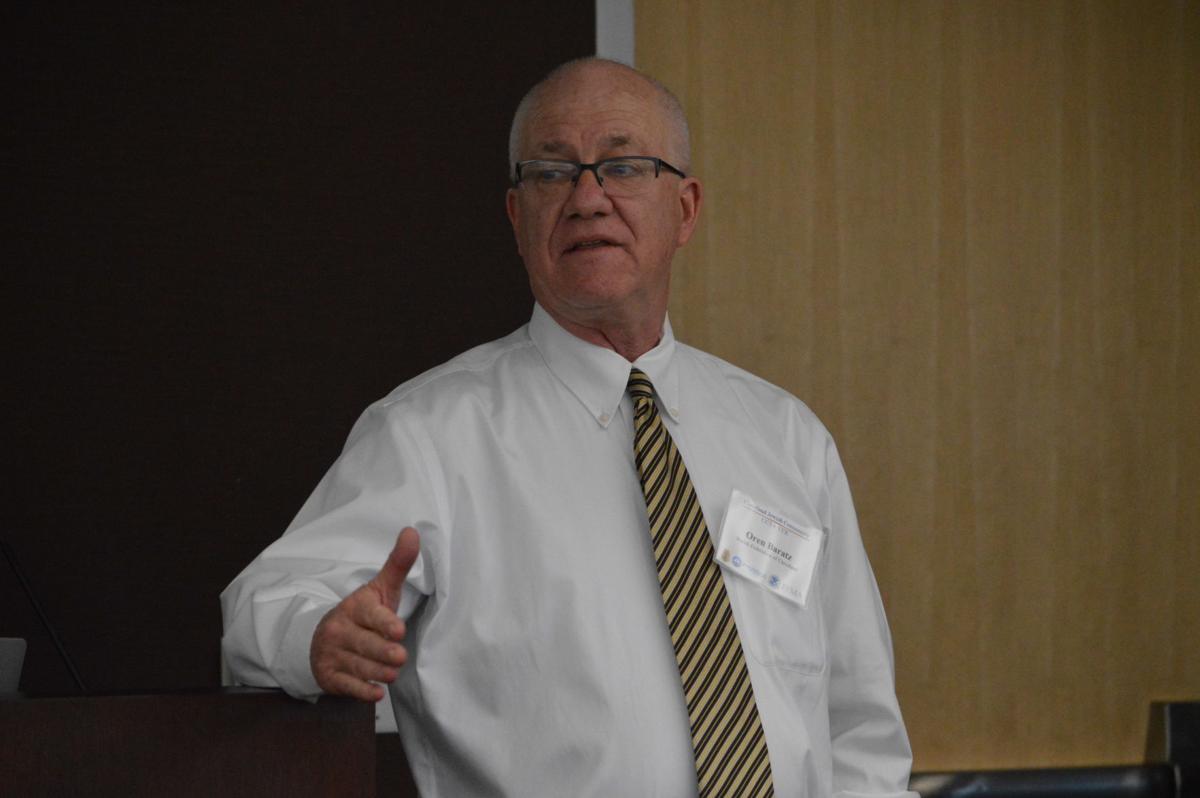 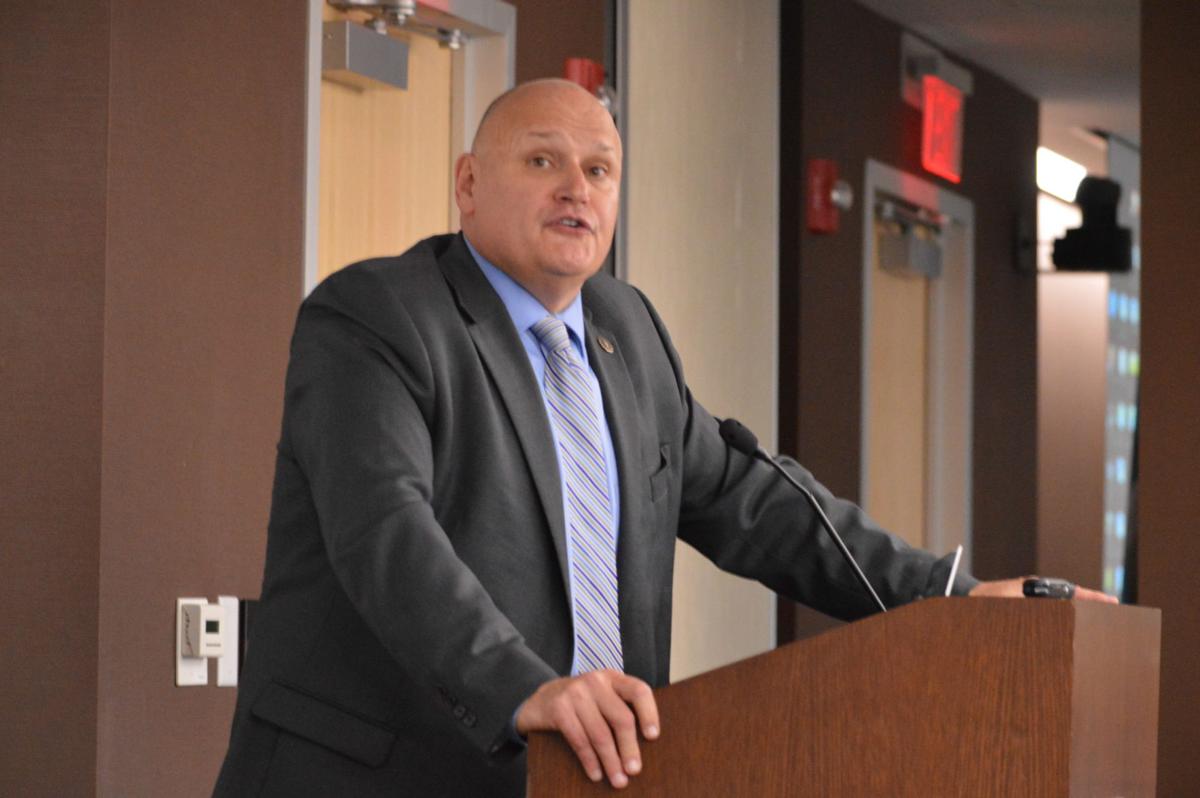 Law enforcement agents gathered with leaders of the Jewish community to hear about lessons learned from the Tree of Life Congregation shootings from the director of community security for the Jewish Federation of Greater Pittsburgh.

The talk by director Bradley Orsini took place at the Jewish Federation of Cleveland in Beachwood Oct. 28, one day after the first anniversary of the shootings that killed 11 and injured six.

The talk took place in the context of a tabletop training exercise, a simulated emergency planning session. About 135 people attended.

Orsini said his refrain was, “There’s no such thing as too much training.”

He explained that members of all three congregations housed at the Pittsburgh building where the attack took place – the Tree of Life, Dor Hadash, and New Light – had undergone security training as recently as five weeks before the shootings.

He rolled videos showing survivors of the shootings speaking about their experience. Rabbi Jeffrey Myers, spiritual leader of the Tree of Life Congregation, spoke about the importance of having a cell phone at all times during services.

“I don’t think I need to repeat to you the story of what happened in Pittsburgh on Oct. 27, 2018,” Myers said in the video. “But I can say this: I’m here today talking to you because I had my cell phone on me. Now as an observant Jew, I wouldn’t normally have my cell phone on me. I kept it (at) home, plugged in. But I took security training. What did I learn? One very important thing: You need to have your cell phone on because you never know when you might need it.”

Another congregant recounted her escape as well. In a separate video, she, too, spoke of the necessity of carrying a cell phone at all times, and bemoaned the fact that she was wearing a pair of pants with tiny pockets, too small to hold a cell phone.

In yet another video Orsini screened, a 92-year-old man spoke of his decision to move as soon as he saw the gunman.

Orsini also spoke of events after the shooting – of the decision to have the central reunification point be the Jewish Community Center rather than Chatham University, which was initially discussed as a location for reunification after the attack.

“We knew we would be at the JCC,” Orsini said. “They posted on TV the family reunification center was going to be at Chatham University but we already sent our resources to the JCC.”

Minutes into a conversation with the FBI and law enforcement, “I think they all realized the necessity of having it at one of our homes,” Orsini said.

The second thing Orsini said he did was gather the presidents of all three congregations to determine who had been in the building.

“We were able to divide up that JCC into one for family large-scale reunification,” he said. “That’s where they checked in. That’s where they met. The FBI responded to the JCC and conducted initial interviews there.”

In addition, the JCC became the central place for help, including mental health professionals.

“We were pretty much organized by 1:30 in the afternoon,” he said. “We organized that relatively quickly.

“No matter how much you plan, there is chaos in every one of these things. It’s how you can manage the chaos that will get you through the day.”

He said the Pittsburgh federation, with the city and law enforcement’s help, set up for the vigil attended by thousands the next evening with less than 24 hours’ notice.

“Our goal was to make sure come Monday morning, every one of our schools were open, every one of our early learning preschools were open and that the Jewish community was going to be open for business,” Orsini said. “That was really important to us right at the beginning. Right at the beginning we decided we are going to do everything we can to secure that community because we knew the community was going to be terrified.”

In addition, he spoke of the Pittsburgh federation’s decision to secure Jewish institutions for 30 days following the shootings.

Orsini said one lesson learned was that the federation should have made hourly briefings to the community.

“We had family members in there,” he said. “Nine different families that know their loved ones are probably gone, but nobody’s talking to them. Nobody’s giving them information. The community does not understand. … We know we need to brief hourly.”

Orsini also spoke about working with the Chevra Kadisha and the Jewish Burial Society to coordinate with the FBI regarding the cultural issues such as the removal of the bodies and the recovery of any organic tissue left behind. The FBI and the Pittsburgh police department were incredibly respectful of those cultural needs and continued throughout the evening to work with the Chevra Kadisha during the process, he said.

Orsini said there was a briefing at the JCC for leaders in the Jewish community 24 hours after the shooting.

“We briefed our community. We laid out the plan to secure the community so we could open up for business Monday morning,” he said. “And I will tell you, come Monday morning, only one family out of all our day schools didn’t send their kids.”

There were 11 funerals and shivas to prepare for.

Families, he said, made the decisions about where media would be allowed.

In response to a question about why the Tree of Life was chosen, Orsini spoke about basic security.

“I am a really big believer in basics: signage, surveillance cameras, you know, signs on the door, building’s under 24-hour surveillance,” he said. “I think the right amount of security is lock your door. … what did we learn in Germany? The door was locked.”

He said the Pittsburgh federation bought remote panic buttons and basic access control for every building in the Jewish community.

“We know that … getting police there as quickly as we can is a really important thing,” he said. “It’s a lifesaver.”