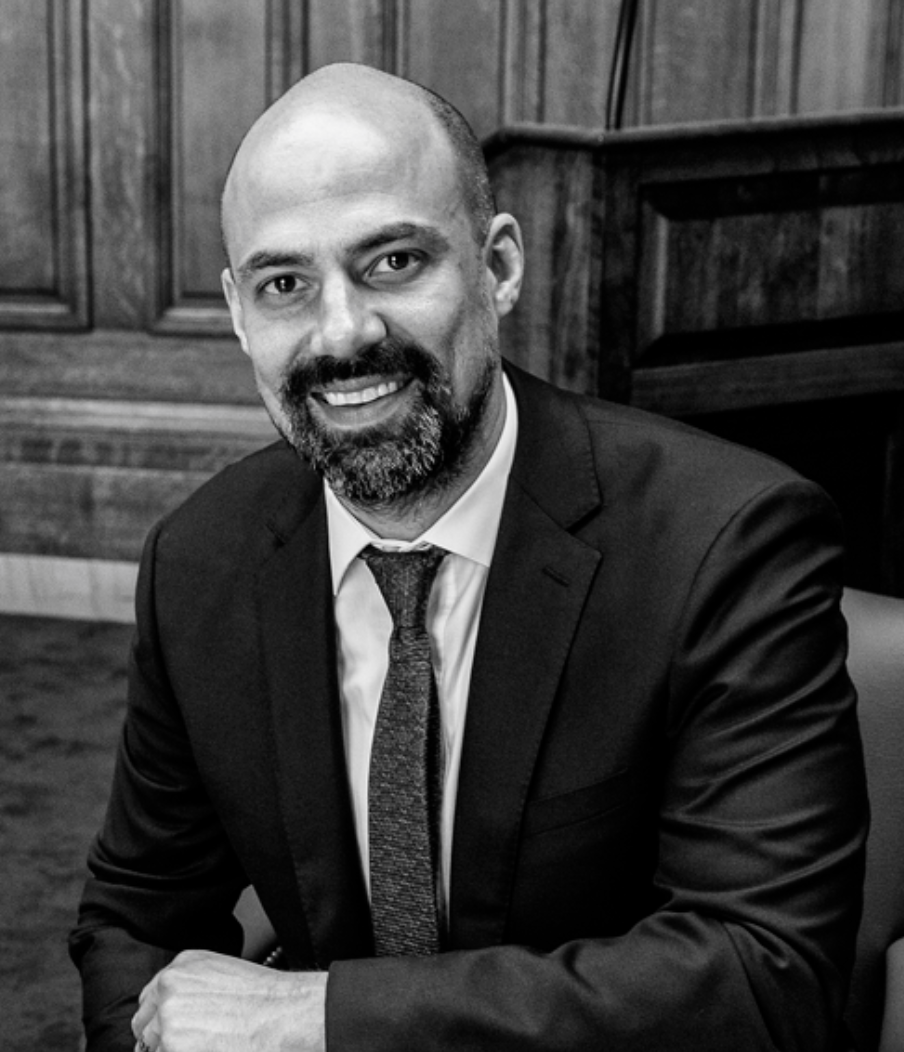 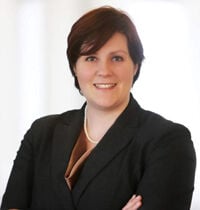 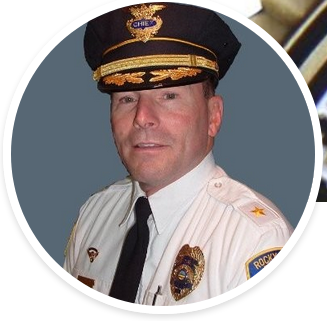 On his first day on the job, Beachwood’s police chief received a letter from a special prosecutor warning him about Lt. Kevin Owens, calling his conduct “unprofessional and unethical.”

Stephanie Scalise, who is representing the city of Beachwood in a criminal case against Beachwood City Councilman Mike Burkons, wrote Police Chief Kelly Stillman on Sept. 28 about a text conversation between Owens and Burkons.

Scalise, who was asked to review public documents relating to the Aug. 17 Beachwood City Council censure of Burkons, whom Scalise is prosecuting for interfering with the civil rights of Beachwood resident Alix Noureddine. Burkons emailed Noureddine’s employers after he complained about Owens in a September 2018 incident with a Black teenager at a Beachwood city park. Noureddine is the assistant law director of Cleveland Heights.

“On the exact same date that the councilman sent his retaliatory email, ... Owens thanks him for doing this illegal thing for him,” wrote Scalise, adding she “seriously considered” whether there was probable cause to charge Owens with conspiracy. In addition, she was “shocked” at “Owens’ texts thanking a public official for purposefully trying to intimidate another citizen for making a complaint against him.” 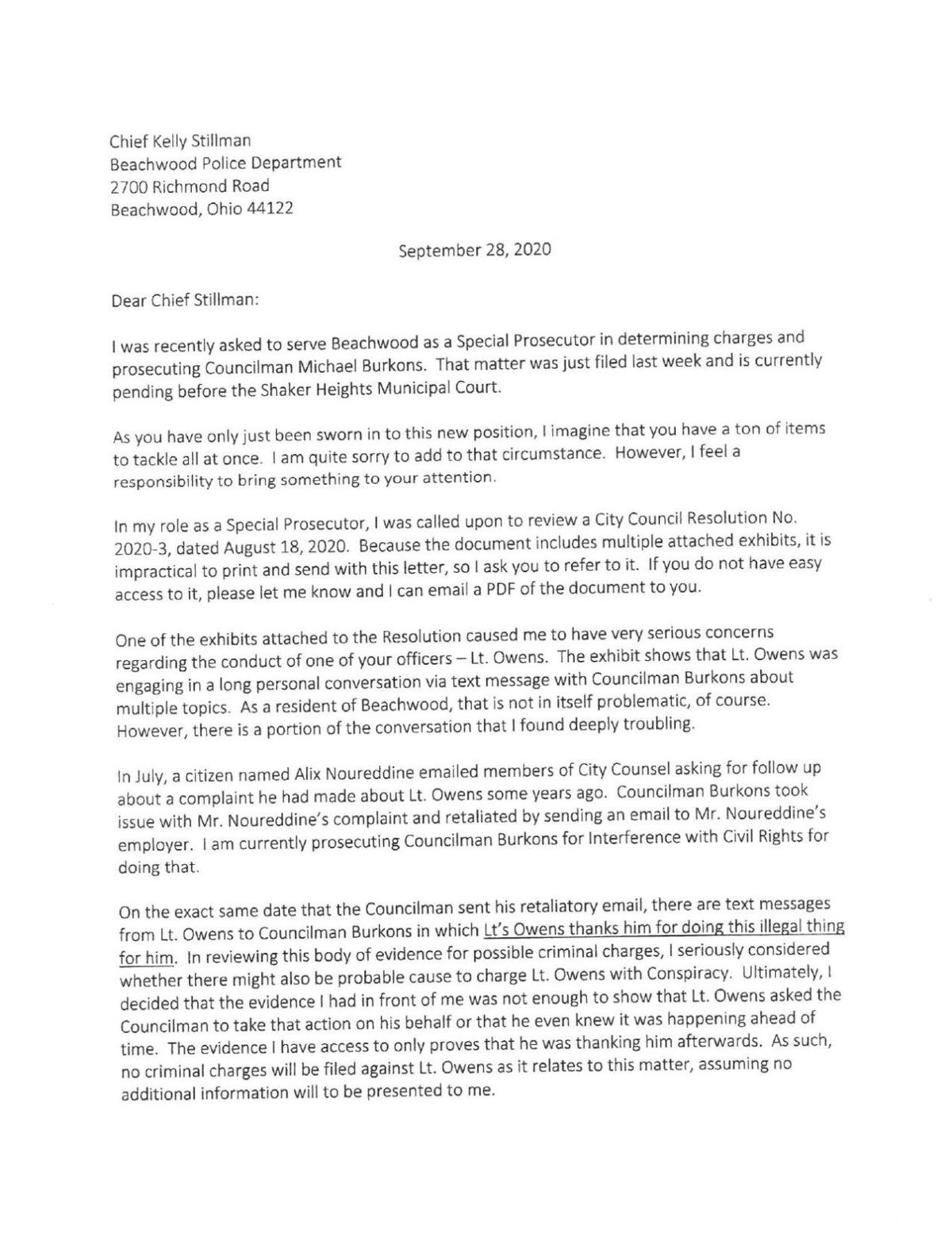 Because she was unfamiliar with Beachwood Police Department’s policies and procedures, Scalise wrote, “I leave it to you to conclude how it might apply in this situation,” and added she “would not be surprised if the citizens of Beachwood unfairly question the integrity of other public servants.”

Stillman said he forwarded the letter to the city law department for review.

“I had no knowledge of what had happened,” Stillman told the Cleveland Jewish News Dec. 14. “I didn’t even know what had transpired. I put it on my to-do list.”

On Dec. 7, attorney Peter Pattakos, who is defending Burkons in the criminal case, forwarded to Beachwood City Council Scalise’s letter, which he obtained in a public records request.

“How would this attached letter from Ms. Scalise – who, unlike Burkons, purports to have the power to, and expressly threatened to use state power against Owens due to his speech – not be a substantially clearer example of criminal conduct?” Pattakos wrote in his Dec. 7 email to council. He added her letter “underscores the ridiculous nature of the legal theory being applied against Burkons, as well as the disastrous nature of Scalise’s representation.” 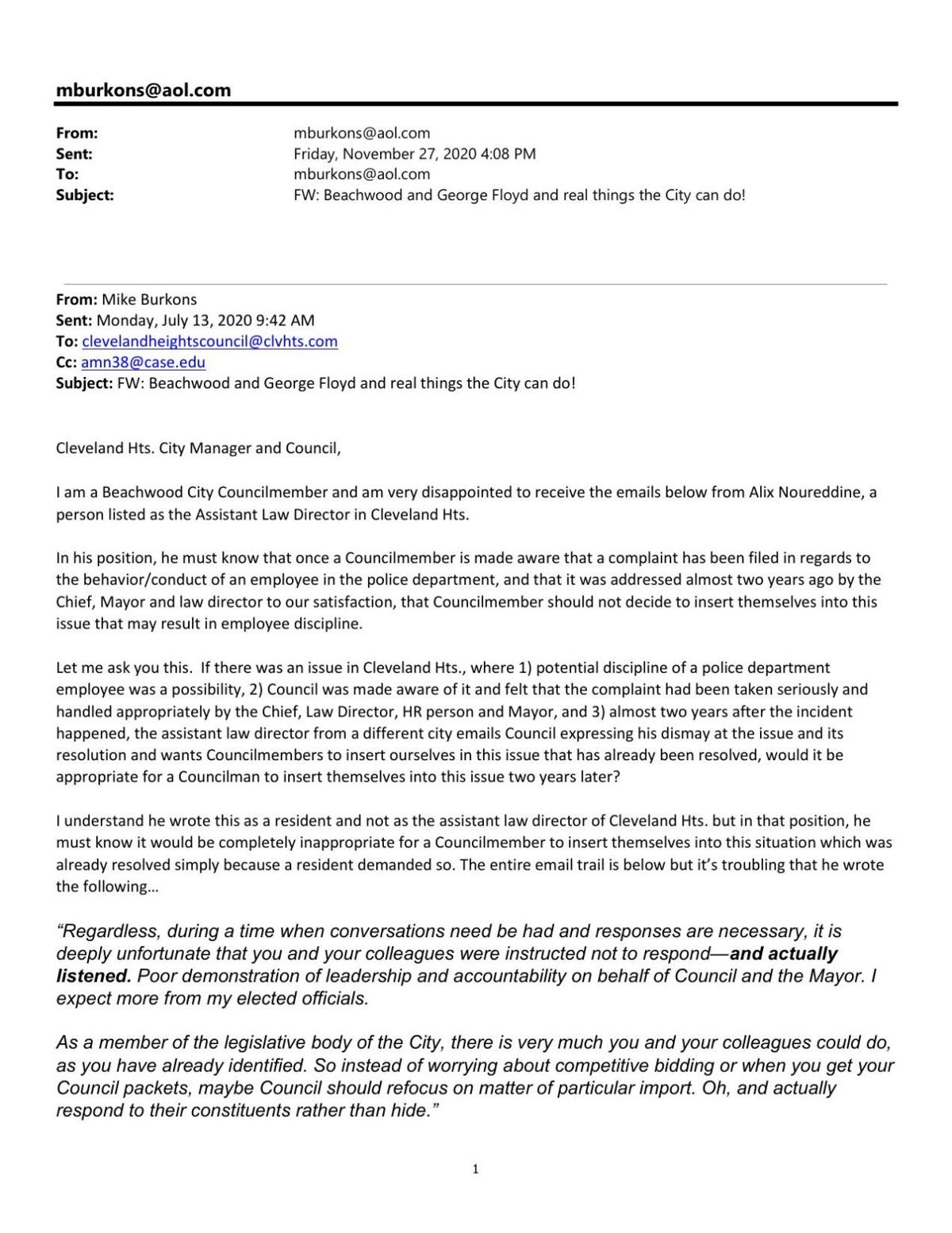 Pattakos has argued Scalise, who is representing the city of Beachwood without compensation, is not authorized to do so because council did not vote to appoint her according to city charter. She is the University Heights city prosecutor.

In a Dec. 14 email to the CJN, Scalise explained her position.

"As vice chair of the Cleveland civilian police review board, Scalise said she and her colleagues sent correspondence to police leadership about possible violations of police policy, especially in cases where the conduct could render the officer untrustworthy as a witness.

“My letter to chief Stillman was not intended to ‘shut up’ a citizen, it was intended to give the police department the opportunity to review whether a police officer’s conduct may have violated his sworn oath,” Scalise wrote.

She told the CJN she has not and would never contact a civilian employer.

Scalise also said the timing of the letter, on Stillman’s first day as chief, was coincidental, and that she had previously contacted the acting chief and at her first opportunity followed up with a letter to the new chief.

“I believed that failing to bring that suspicion to the police department’s attention would be unethical,” she wrote. “I thought, what if someone finds out that I knew about this and didn’t say anything, how will I explain that choice in the future?”

Scalise said Burkons’ email to Noureddine was sent to “shut him up.”

She also said she was not directed by anyone to write the letter to Stillman.

“Throughout this entire process of my acting as the special prosecutor, not one single person has told me what I should do,” Scalise wrote. “No one has told me I should charge the councilman. No one has told me I should write a letter to the chief of police about possible police officer misconduct. I find it insulting to continue to have that allegation thrown out in public, potentially damaging a good reputation that I have worked very hard to earn, without any real evidence to support it. I also find it quite insulting because the underlying implication is that I wouldn’t know how to do the job if someone didn’t tell me how.”

In addition, Scalise said there was no conspiracy to charge Burkons among Beachwood city officials, as Pattakos has claimed.

“There is absolutely no evidence to support the allegation that anyone in Beachwood is engaged in some imagined conspiracy against councilman Burkons,” she wrote. “The more he insists that he did nothing wrong and everyone else is out to get him, the more it becomes obvious that the councilman learned nothing from this ...”

On Dec. 7, five members of city council voted to appoint Cleveland lawyer Kenneth J. Fisher as special counsel at a rate of $250 per hour.

Prior to his hiring, Beachwood Law Director Diane A. Calta told city council the city’s insurance policy would not cover a taxpayer’s suit.

On Dec. 8, as he said he would in two demand letters to city officials, Pattakos filed a writ of mandamus in the Ohio 8th District Court of Appeals seeking to compel the city to follow its charter and bar Scalise from prosecuting the case.

Pattakos has also argued that Chardon Municipal Court Judge Terri L. Stupica does not have jurisdiction to try the case. He took that question to the Ohio 11th District Court of Appeals. On Dec. 4, Judge Matt Lynch, writing for the three-judge panel, ordered the case “stayed,” meaning it will not move forward, “pending final determination of the present action at which time the stay will automatically dissolve.”

The case originated at Shaker Heights Municipal Court. Judge K.J. Montgomery ordered the case moved to Chardon based on Burkons’ status as a councilman. She did so after appointing Scalise special prosecutor following Beachwood city prosecutor Nathalie Supler’s withdrawal based on a conflict of interest. The criminal case against Burkons is a first-degree misdemeanor. If convicted, he could face up to 180 days in jail, a fine of up to $1,000 or both. 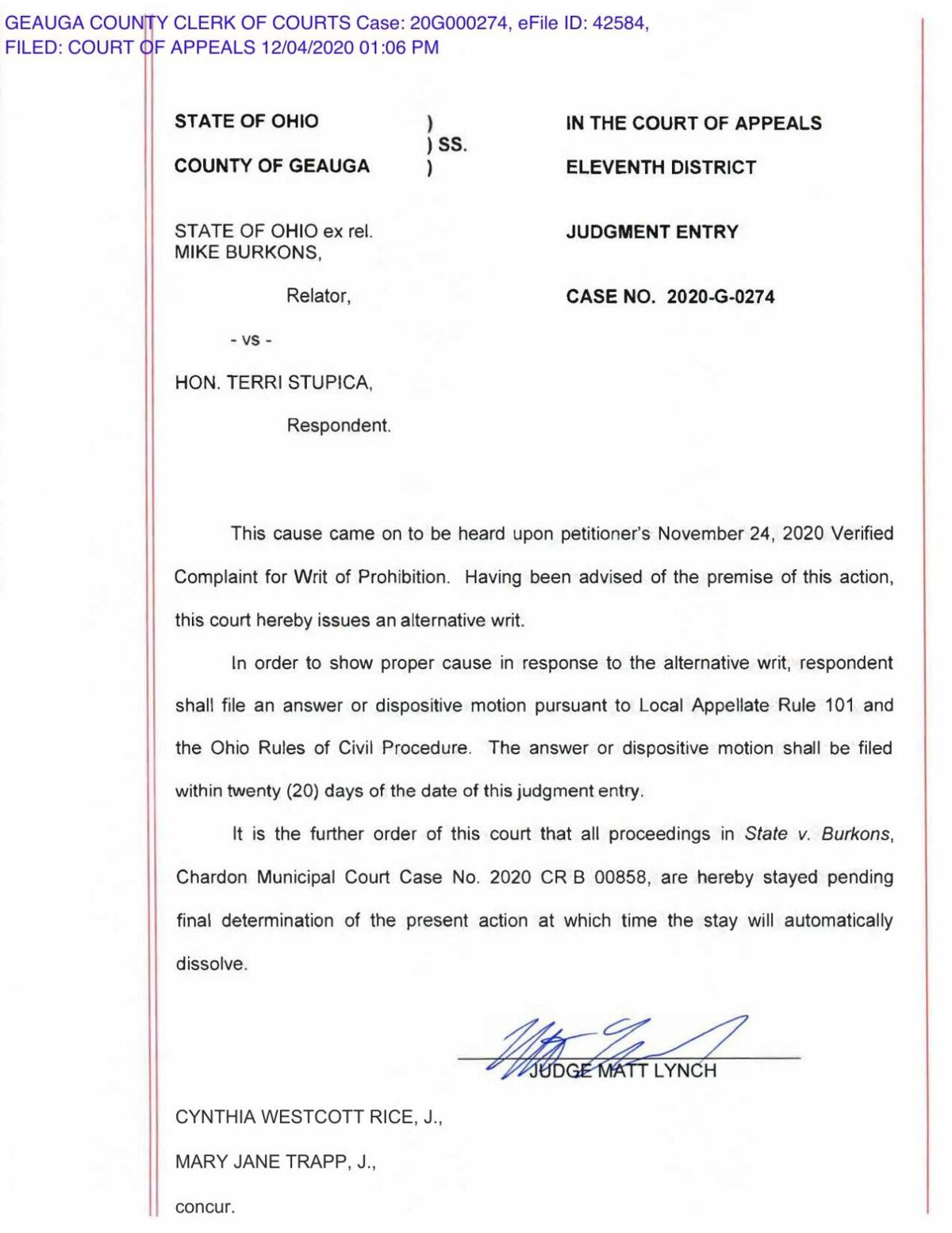