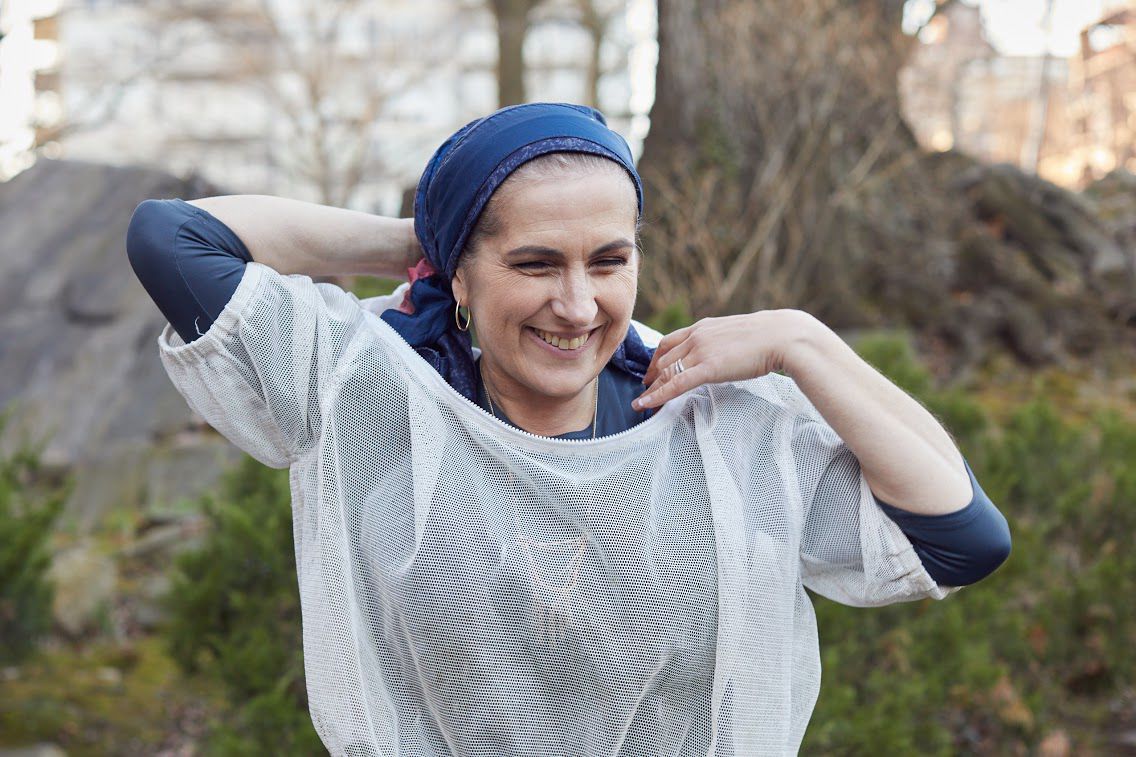 Rabbanit Amalia Haas of Beachwood suits up to care for bees. 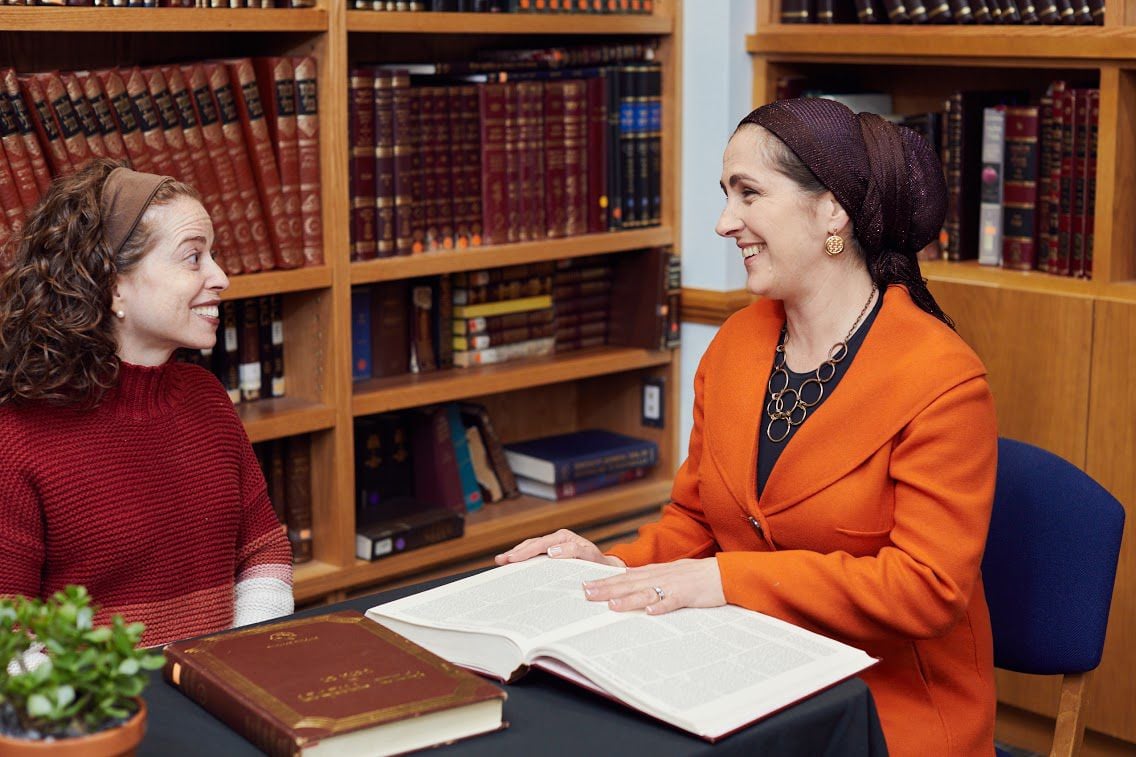 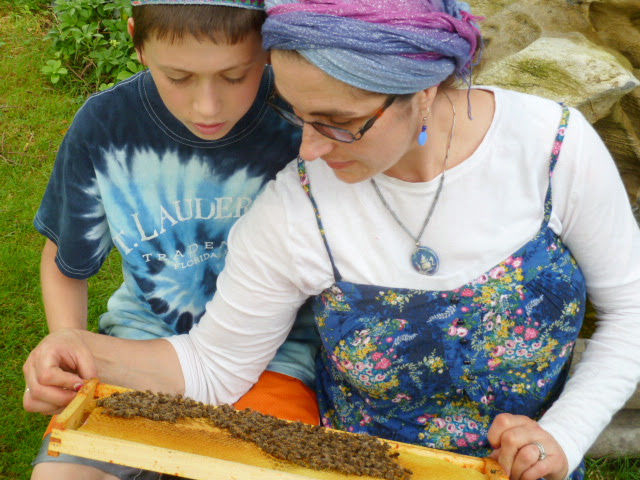 Rabbanit Amalia Haas with her son, Ilan, who was then 11, examine a frame of bees.

For Rabbanit Amalia Haas, the path to ordination at a women’s yeshiva was circuitous and varied, and her destination following it is wholly unexpected.

Ordained in June at Yeshivat Maharat in Riverdale, N.Y., she was among a class of nine women, and one of five who went through its three-year executive kollel program.

Yeshivat Maharat is the only Orthodox seminary to ordain women as clergy. As of June, she was one of 43 women in the world to have finished the program.

Rabba Ramie Smith, who now lives in London, England, was ordained in 2016 at Yeshivat Maharat as well. She is the daughter of Arlene and Michael Smith, who live in Beachwood.

Haas, 50, of Beachwood, was born in Chicago and raised in one of the city’s few integrated neighborhoods.

Her family attended Chicago’s KAM Isaiah Israel, a Reform congregation and the oldest synagogue in Illinois. Rabbi Arnold Jacob Wolf led the congregation and composer Max Janowski was the cantor. She and her twin brother, Daniel, held a joint b’nai mitzvah.

“I grew up in this incredible Jewish milieu,” Haas told the CJN.

In high school, she bicycled to Whitney M. Young Magnet High School in Chicago’s inner city, where she sang in a choir as one of two white singers. She described the other singers as the “stars” of their church choirs. There were seven Jews at the school, she said, including faculty.

Haas’s introduction to what she calls “savage inequalities” began at that high school. Then, for a year, her family lived in Palo Alto, Calif., while her mother was on sabbatical from the University of Chicago.

“Issues of social justice and racism were very, very clear to me from those two high school experiences,” she said.

Haas also grew up with a fascination for plants and animals, stemming from her father’s influence on her as a naturalist. He was a biochemist.

She studied both music and women’s studies at Oberlin College and Conservatory in Oberlin. Rabbi Shimon Brand was executive director of Oberlin’s Hillel at the time, a man she said had great influence on her as she undertook Jewish leadership opportunities on campus.

“At Oberlin, I also met halachically observant Jews for the first time,” she said.

There, she joined a Hallal and kosher dining cooperative where she “learned Jewish law … both in terms of the holidays and food preparation, even though it was a completely pluralistic membership – including some people who weren’t Jewish and also weren’t Muslim.”

She became more observant at that time.

After graduating, Haas lived in Israel for several years, attending Pardes Institute of Jewish Studies, Matan, and a college for women called Michlala, all in Jerusalem.

In Israel, she began studying exclusively in Hebrew with Israeli speakers, a decision she called “a very large stretch” for someone who didn’t grow up in Israel or in Jewish day schools.

She also attended Yeshiva University in both New York and in Israel, studying for a master’s degree in Jewish education.

Throughout her college and Israel years, Haas maintained ties with her Chicago spiritual leaders, Wolf and Janowski.

In Israel, she reconnected with Adam Haas, whom she first met at Oberlin. The two married in 1995 in Chicago with Brand officiating.

She worked for Hillel in Oberlin and for Cleveland Hillel for about a decade after marrying.

After her family moved to Beachwood in 2000, Haas said she became aware of “how disconnected children across the movements seemed from nature and awareness of where food comes from.”

“I segued into this Jewish environmental work with this focus on food and health,” she said, co-founding a kosher pastured poultry company, The Green Taam. Now, she keeps bees at her Beachwood home, selling honey and teaching the significance of the pollinator “through a Jewish lens,” in a social venture called Bee Awesome.

As a member of both Oheb Zedek Cedar Sinai in Lyndhurst and Green Road Synagogue in Beachwood, Haas said she began “really craving the depths of Torah study that I had been able to access in Israel, and that I sensed was more available to women on the East Coast.”

A PLACE FOR HER

“I had contemplated becoming a cantor when I was in the Oberlin conservatory, but there were some obstacles to that from a Jewish legal standpoint,” she said. “Those same obstacles really don’t pertain to women becoming rabbis because it’s an educational role.”

As a mother of six children, Haas decided Yeshivat Maharat, which offered both distance and flexible learning, would work well for her.

“It’s just been an extraordinarily rich privilege and huge blessing to be part of this community of women and of teachers,” she said, adding that one of her study partners lives in Australia, so they would study at 7:30 a.m., which corresponded to 9:30 p.m. the same evening in Australia.

While there, her teachers and fellow students suggested she might want to pursue chaplaincy.

“On their recommendation I did what’s called chaplaincy pastoral education at the Cleveland Clinic in the fall,” she said. “It was really one of the most challenging and rewarding experiences I’ve ever had.”

While there, Haas has been called to the bedsides of dying patients and has noticed a troubling difference in age between white and Black patients.

“This is what our society is creating,” she said. “It’s such an extraordinary inequality.”

Haas is now pursuing a residency to become a fully qualified chaplain through Cleveland Clinic.

Haas said she hopes to support individuals and families.

“But I also hope to bring a lens and a voice to our ongoing obligation as Jews and as members of the wider community to close these very deepened chasms of unfair access and privilege that affect our nation and affect our city,” she said.

She also said she plans to facilitate rituals for women and girls, as well as to continue her work in environmental education and advocacy.

Haas said one of her favorite Jewish texts is the book, “The Sabbath,” by Rabbi Abraham Joshua Heschel. Another is the quote from Psalm 90, “Teach us to number our days that we may acquire a heart of wisdom.”

“One of the great spiritual challenges that I believe we face as human beings is to really appreciate and live in the moment,” she said. “The numbering of days, the numbering of hours, and the numbering of moments to me is one of the most powerful trainings that we have to undertake in life.”