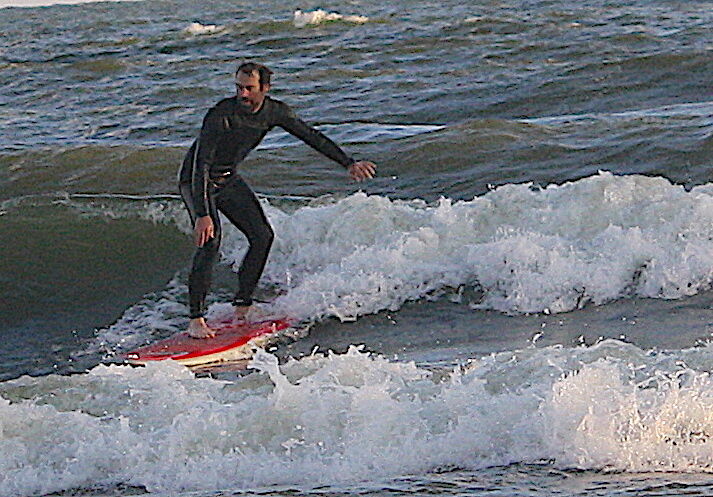 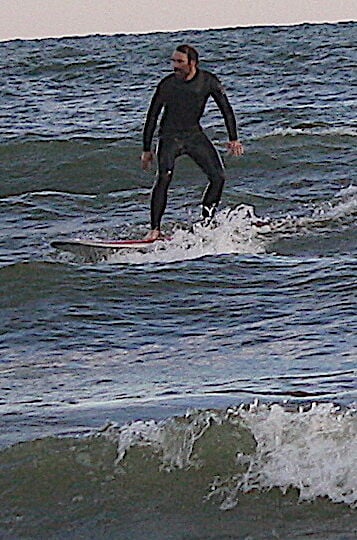 Rabbi Noah Leavitt surfs at Edgewater Park on Cleveland’s west side. He said the best surfing on Lake Erie is in the winter. 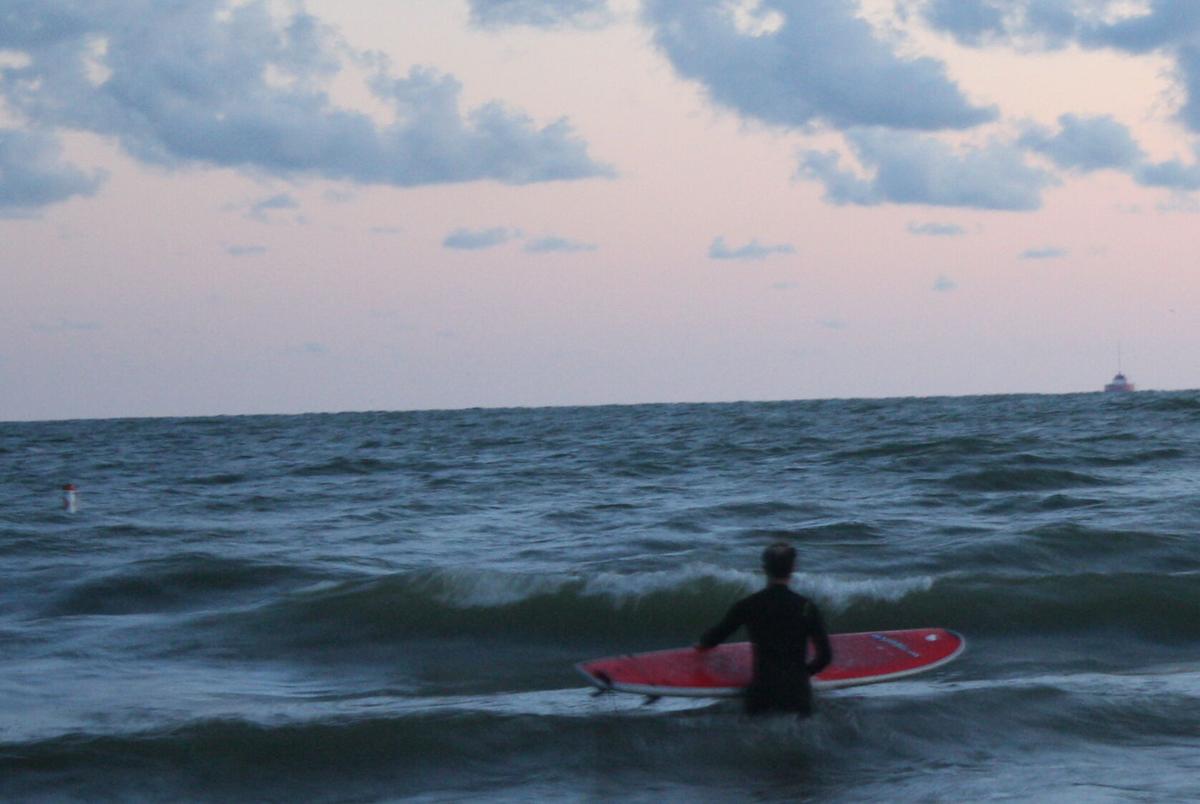 Waiting for the right wave is a large part of surfing for Rabbi Noah Leavitt. 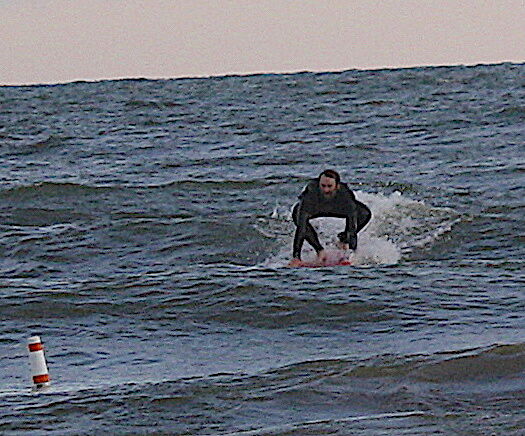 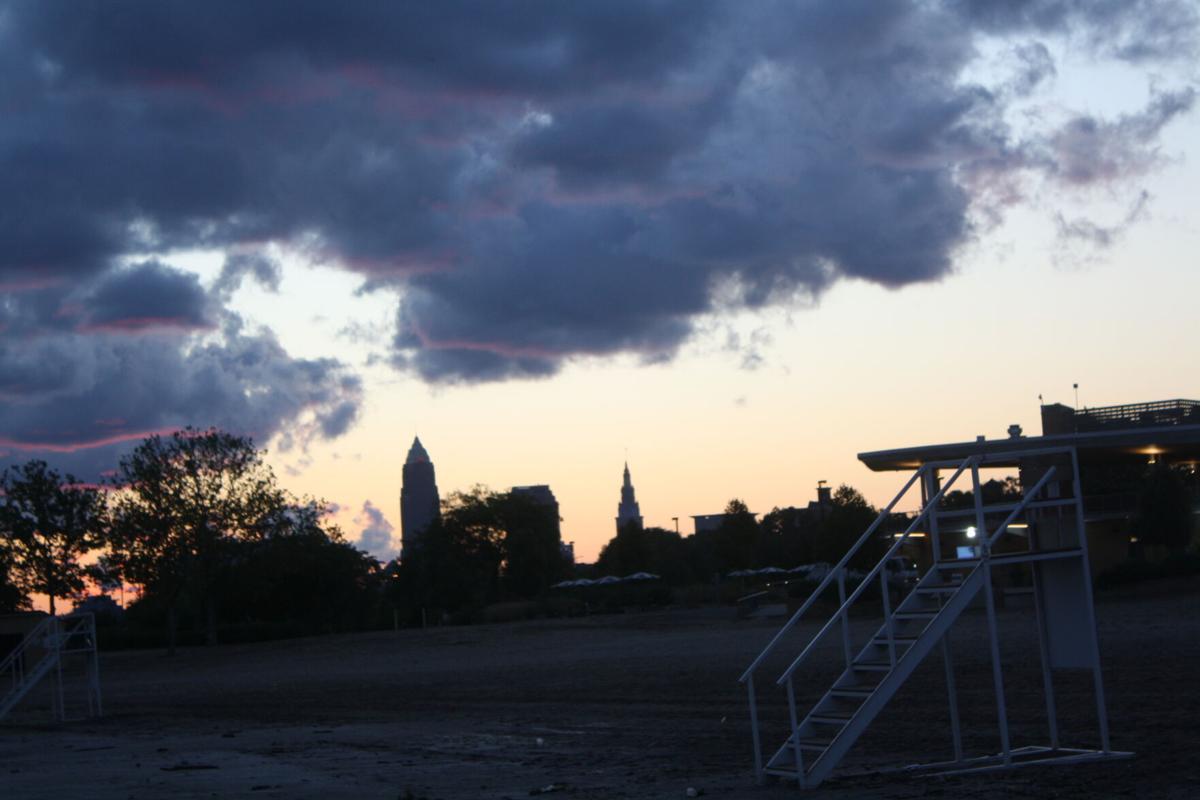 Rabbi Noah Leavitt said he enjoys seeing the sunrise over the downtown Cleveland skyline from Edgewater Park as he surfs.

Rabbi Noah Leavitt surfs at Edgewater Park on Cleveland’s west side. He said the best surfing on Lake Erie is in the winter.

Waiting for the right wave is a large part of surfing for Rabbi Noah Leavitt.

Rabbi Noah Leavitt said he enjoys seeing the sunrise over the downtown Cleveland skyline from Edgewater Park as he surfs.

Leavitt, spiritual leader of Oheb Zedek Cedar Sinai in Lyndhurst, was introduced to surfing at the age of 30 in Sydney, Australia, when he was a visiting rabbi. He said the challenge of learning something new and being out on the water drew him to surfing.

While there is surfing in New York City where Leavitt is from, he said he didn’t discover that until after he returned from Australia.

Now 35, Leavitt can be found at Edgewater Park in Cleveland riding waves in all seasons. In fact, winter surfing, he said, can offer some of the best experience because that’s when the biggest storms occur.

“Sydney and in particular, Australia in general is sort of a surfing mecca or capital,” he told the Cleveland Jewish News. “I met people who surf and I loved the ocean – even before surfing, so it was sort of a natural thing.”

He took group lessons, he said.

“And some friends were kind enough also to put up with me when I was very much a beginner, and to give me some tips,” Leavitt said.

He said the sport requires balance, coordination, being comfortable in the water and patience – both to learn the skill and to wait for the right waves.

While there may not be a term to express surfer’s regret – for missing the right wave, Leavitt said, “It’s something I have felt.”

“Definitely there are times where you feel like you missed the moment by taking the wrong wave or letting a wave go that you should have ridden,” said Leavitt, adding he thinks of each wave as an opportunity. “Where you are in relation to the wave really also changes what the right wave is for you. The right wave for someone further off the beach is not usually the right wave for you. So it’s really about waiting for that right opportunity for you to take.”

Leavitt said he enjoys watching other, more skilled surfers in Lake Erie and especially in California.

“But also there really is an incredible amount of wildlife and just the natural world that you see surfing, where there are dolphins that are 20 yards behind you, “ he said, adding that there are other beautiful sights. “Being out there and seeing the sunrise over downtown Cleveland is always an incredible deal.”

Leavitt said the best piece of advice he was given as a novice is also one of the most common pieces of advice given to surfers: Surf within your limits.

“Usually the most enjoyable surf is when you’re surfing within your limits,” he said. “It’s good to push yourself, but to know you’re not getting in over your head, because then it can stop being enjoyable.”

Minutes before dawn, Leavitt drove from his Beachwood home to Edgewater Park on Cleveland’s west side to test the water of Lake Erie Aug. 2.

“On the Great Lakes, we only have wind swell,” Leavitt said. “I’m looking for at least 15 miles an hour coming from the north.”

Overnight, the wind had died down a bit, leading to smaller waves.

“Often in the summer on Lake Erie, there are no waves,” he said. “So, to have waves in warm weather is always a treat.”

He had said the morning prayers before leaving home and unpacked his board in the nearly empty and dark parking lot.

As the dark sky turned to gray and pink, he walked his board out waiting for waves to catch for a ride back to shore.

“It gives you a different focus or sort of appreciation for the world, which is also something that I really enjoy about it.”

Leavitt said the experience of surfing enhanced his understanding of Birchat Hashachar, a long list of morning blessings.

“It was just amazing to be out there,” he said, “as that’s happening after seeing that transition from night to day.”