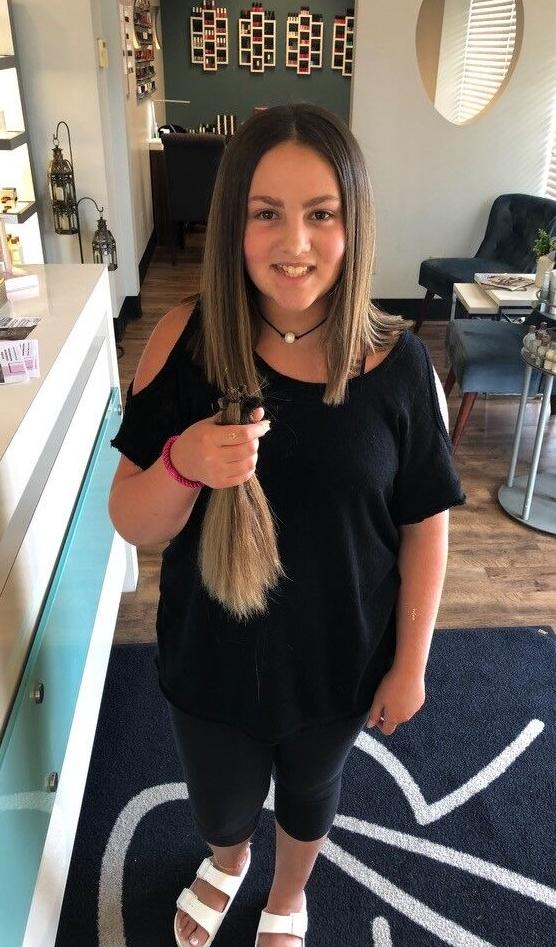 Addison Gillett shows off the 11 inches of hair she donated to Locks of Love in honor of a best friend’s mom who was diagnosed with breast cancer and lost her hair due to chemotherapy in July 2019. The donation was a part of Addison’s mitzvah project. 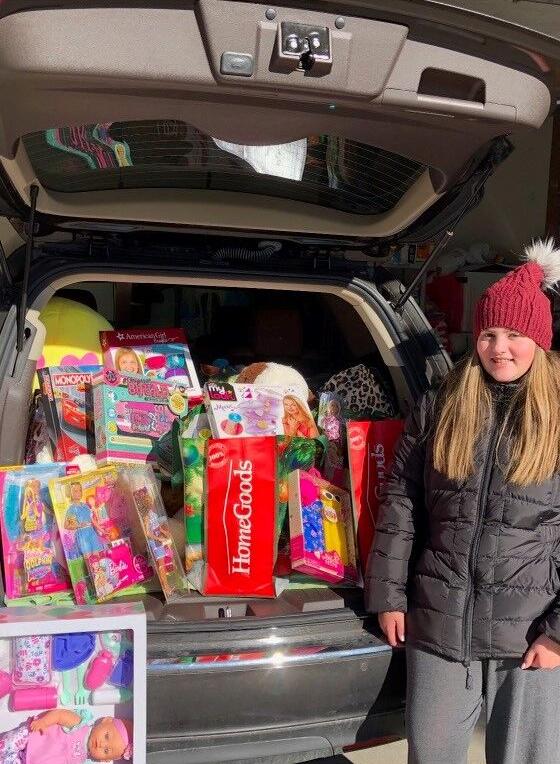 Addison Gillett stands in front of a car full of toys she collected for eight years that she donated to a toy drive held in partnership with Solon Chabad and the Cleveland Chesed Center in December 2020. The donation was a part of Addison’s mitzvah project.

When it comes to deciding on a mitzvah project, many excited preteens start thinking about ideas a year or so away from their b’nai mitzvah. But for Solon resident Addison Gillett, her mitzvah project spent almost a decade in the making.

Addison, a 13-year-old student at Solon Middle School, crafted a multifaceted mitzvah project, one that impacted local families in need, as well as cancer patients.

Eight years ago, she decided she would put aside a majority of the gifts she received every birthday and Chanukah with the goal to donate them to less fortunate children as part of her bat mitzvah. These gifts consisted of items like clothing and toys.

“I was trying to think of mitzvah project ideas, and I just decided that I get a lot of presents every year for Chanukah and my birthday that I don’t really need,” Addison said. “I thought that I could put them aside and save them up. Then when it’s time for my bat mitzvah, I could give them to someone who would deliver them to kids who don’t get as many presents.”

With over 70 gifts she had amassed by the time 2020 neared its close, Addison’s mom, Shari Gillett, reached out to Solon Chabad for help. Chabad was set to host a toy drive along with the Cleveland Chesed Center for Chanukah in December 2020, where the donated toys would be given to sick children in the hospital and Jewish families in need.

Addison’s contribution to the drive doubled the amount of toys the Chabad had received, said Miriam Greenberg, educational director at Solon Chabad.

“It’s gratifying to see that families will make it a priority to teach their children how to be givers instead of takers in our society,” Greenberg said. “That’s really what God wants from all of us, to see what we can do to help – not only when we feel like it and not only when we want to.”

Completing her years long toy collection was a meaningful effort to Addison, yet in her eyes, her project wasn’t done.

The mother of one of her best friends had been diagnosed with breast cancer. Due to chemotherapy treatments, she had lost all of her hair.

Looking at her own lengthy mane, Addison realized her hair could be put to better use. In honor of her friend’s mom, she donated 11 inches of her hair in July 2019 to Locks of Love, a nonprofit organization that makes custom-made hair pieces for disadvantaged children and young adults who’ve experienced hair loss due to medical conditions.

“Instead of just cutting it off and it going to waste, I thought it would be nice to donate it,” Addison said.

Having celebrated her bat mitzvah Oct. 3 at Solon Chabad, Addison said that it finally sunk in that the mitzvah project she’s spent years on was finally completed.

“It was really exciting, and I felt really accomplished when I was done with it,” she said. “I did it just to make other kids happy, really, and to give back.”

She said her mitzvah project introduced her to a world of community service and helping others. Now that she’s started making an impact in the community, Addison looks forward to finding more ways to lend a helping hand.

“I like giving back to people who are less fortunate than I am,” Addison said. “It makes me happy that I can put a smile on another kid’s face.”