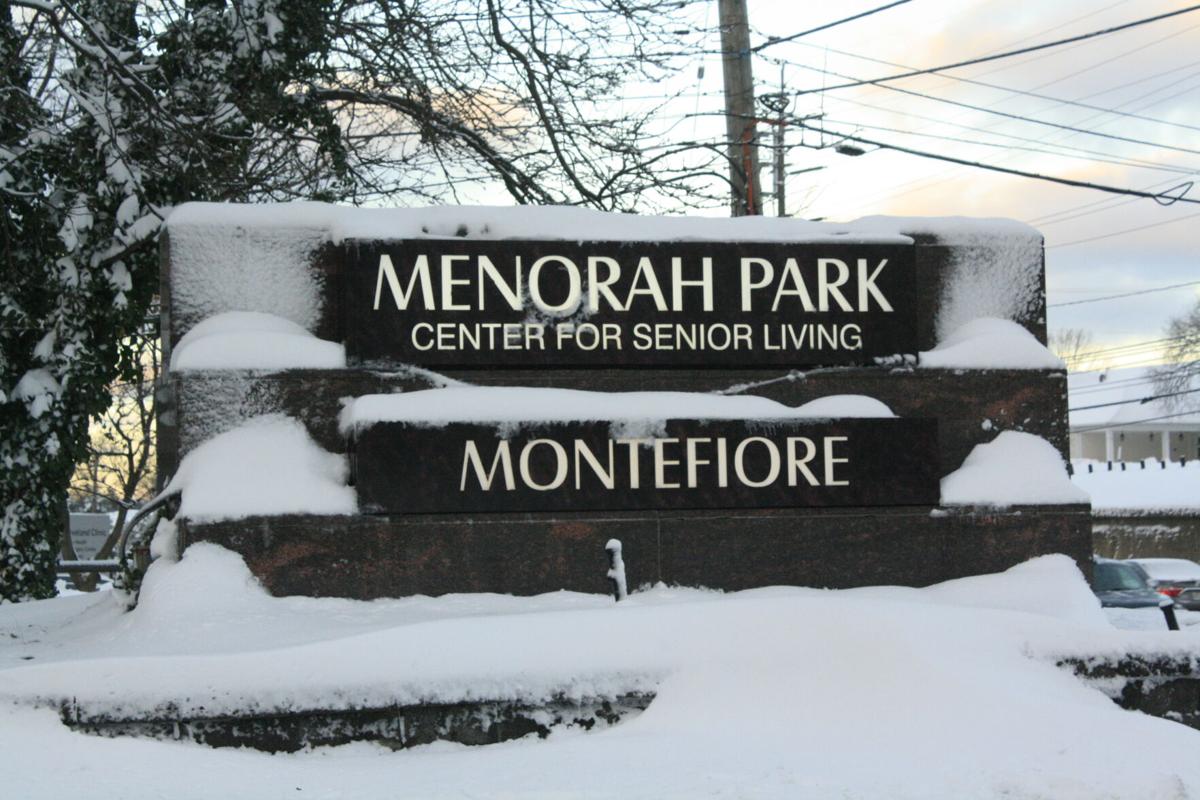 Montefiore has been under investigation. | CJN Photo / Jane Kaufman 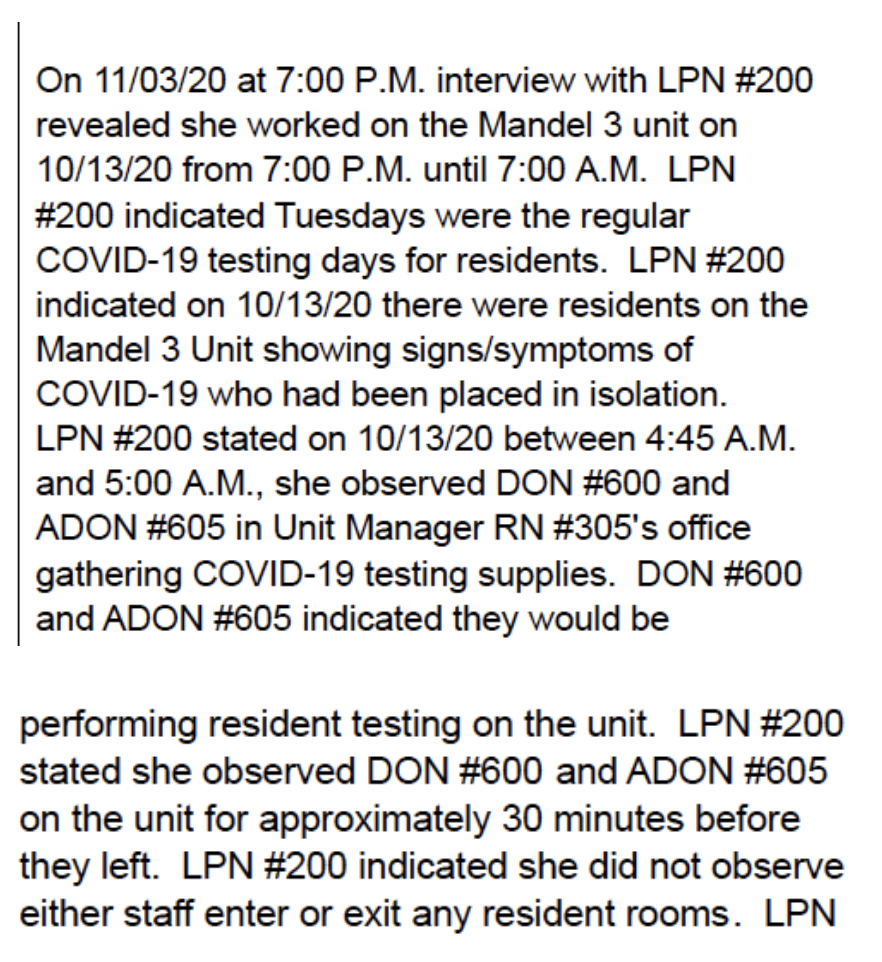 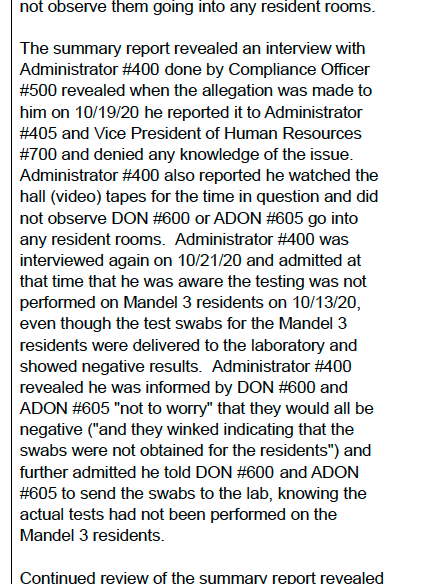 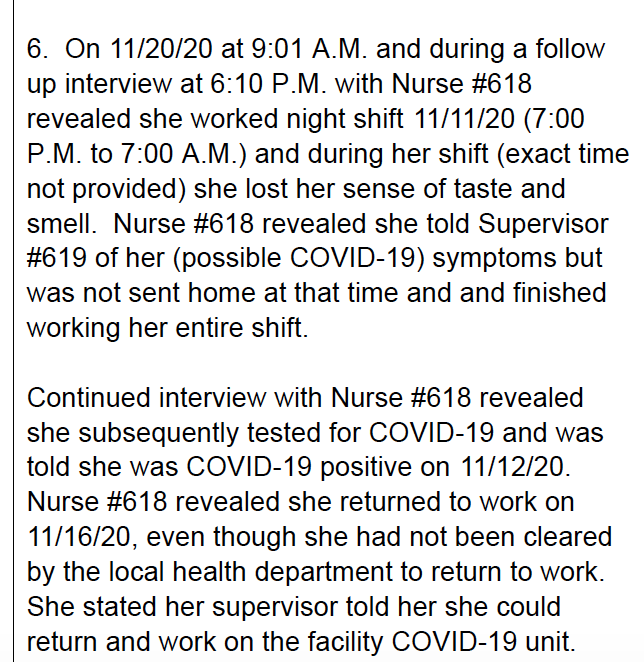 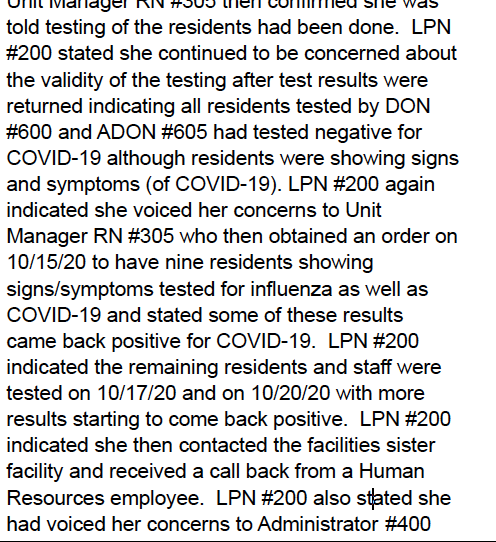 A Montefiore administrator and two directors of nursing collaborated to submit falsified COVID-19 test samples to a lab in mid-October, potentially exposing 183 residents of the Beachwood nursing home to coronavirus, according to a Nov. 24 Ohio Department of Health investigation obtained by the Cleveland Jewish News.

Administrator Ariel Hyman was aware that COVID-19 swab tests collected on Oct. 13 were not from the unit where patients were displaying symptoms of the virus, according to the investigation.

The report does not indicate where the samples were collected.

In mid-October, some residents on Mandel 3 unit began showing symptoms of COVID-19, but the Oct. 13 weekly test of 34 residents on that floor returned 33 negative results.

Hyman, King and Gelle were responsible for the Oct. 13 testing and submission, the investigation report shows.

The three were suspended on Oct. 22 and terminated on Oct 29.

King and Gelle were on Mandel 3 at about 5 a.m. for about 30 minutes that day, an insufficient amount of time to perform the tests, the LPN told the investigator Nov. 3. She also did not observe them going into patient rooms, she reported.

The unit manager asked the LPN to assist her with one COVID-19 test Oct. 13, which was the only one that came back positive.

The LPN reiterated her concerns to the unit manager about the Oct. 13 testing issues and the unit manager obtained a testing order on Oct. 15 to have nine residents tested. With COVID-19 tests coming back positive on Mandel 3, the LPN contacted Hyman on Oct. 19. Hyman “thanked her and indicated someone from human resources would be contacting her,” according to the report. Hyman then reported the LPN’s concerns to another administrator as well as the vice president of human resources.

Hyman was first interviewed by a facility compliance officer on Oct. 19, according to the state investigation and denied any knowledge of a testing issue.

Hyman also told the facility compliance officer he “watched the hall (video) tapes for the time in question and did not observe (King and Gelle) go into any resident rooms,” according to the state investigation.

When he was reinterviewed two days later on Oct. 21, Hyman told the facility compliance officer he “was informed by (King and Gelle) ‘not to worry’; that they would all be negative ‘and they winked indicating that the swabs were not obtained for the residents.’”

He further “admitted at that time that he was aware the testing was not performed on Mandel 3 residents on 10/13/20, even though the test swabs for the Mandel 3 residents were delivered to the laboratory and showed negative results,” according to the state investigation.

The events of Oct. 13 placed the 233-bed nursing home in “immediate jeopardy,” meaning the situation caused “or is likely to cause serious harm, impairment or death to a resident,” according to the Centers for Medicare and Medicaid Services. After Montefiore took corrective actions, the status was downgraded to severity level 2 on Oct. 31.

Reached by the CJN on Dec. 8, Hyman had no comment.

Multiple attempts to reach King and Gelle were unsuccessful.

A new administrator and an infection preventionist were assigned to the facility on Oct. 22. An interim director of nursing was assigned Oct. 23.

A case summary review found 16 residents tested positive for COVID-19 from Nov. 3 to Nov. 15, “which contributed to the facility doing outbreak testing,” which means all staff and residents who previously tested negative were tested again.

The Ohio Department of Health completed for the Centers for Medicare and Medicaid Services the 63-page Nov. 24 investigation. It detailed two abuse cases, issues with respiratory care and prescriptions, as well as a survey of compliance with federal guidelines for COVID-19 infection control. This was a follow-up to a 16-page Oct. 19 state investigation in which Montefiore was found deficient in terms of its quarantine procedures regarding new admissions. Montefiore took corrective actions that day.

On Oct. 27, Menorah Park which affiliated with Montefiore July 1, self-reported the situation to the Ohio Department of Health Strike Team, the Cuyahoga County Board of Health, the Ohio Board of Nursing and the Ohio Board of Executives of Long-Term Services and Supports, which licenses nursing home administrators. In addition, Menorah Park brought in two consultant infection preventionists.

When reached for comment on Dec. 4, Beth Silver, director of public relations and marketing for Menorah Park, emailed a statement to the CJN.

“Like the CJN, we at Menorah Park are deeply interested in the outcome of the state’s investigation into the testing issue we discovered in October and reported to authorities,” she wrote.

Citing “legal issues and investigations arising from our self reports,” Silver had no further comment on the Nov. 24 investigation. “When matters are finalized and become public, we will be happy to provide our response at that time.”

Three families have retained attorneys, the CJN has learned.

Here are some of the deficiencies cited at Montefiore included in the Nov. 24 state investigation:

Nov. 11: A nurse told her supervisor she had possible COVID-19 symptoms, that she had lost her sense of taste and smell. She worked her full shift after notifying her supervisor of her symptoms. She tested positive on Nov. 12 and returned to work Nov. 16 after “her supervisor told her she could return and work on the facility COVID-19 unit.” This was in direct violation of Montefiore’s COVID-19 testing policy, which required staff members with symptoms to be sent home immediately and self-quarantine a minimum of 14 days.

Nov. 15: A state tested nursing assistant, identified as STNA #617, worked first on a COVID-19 isolation unit and was asked to float to two other units per a new assistant director of nursing. She was not given a new uniform in between transfers.

Nov. 17: Seven residents, including Resident #173, tested positive for COVID-19 on units where the STNA had worked Nov. 15.

“The STNA (STNA #617) voiced specific concerns that she had specifically taken care of Resident #173 (who was COVID-19 negative and asymptomatic of COVID-19 symptoms) ‘all day’ … because she needed to be monitored,” the state investigation reads. “She felt so bad about this, feeling she had given COVID-19 to the resident and had been crying all day.”

In addition, “There was no evidence the facility completed contact tracing to determine if these residents had in fact possibly contracted COVID-19 from STNA #617.”

Nov. 18: A state tested nursing assistant told a state investigator that four residents were often out of their rooms without masks. Three tested positive for COVID-19 and the fourth refused testing.

The Ohio Department of Health imposed a plan of correction, which included educating staff, and required Montefiore to implement testing measures.

In addition, the Ohio Department of Health is applying a discretionary denial of payment for new Medicare and Medicaid admissions effective Dec. 2, 2020, until Montefiore is in compliance, according to the Centers for Medicare and Medicaid Services,“or until the facility is terminated from the Medicare program.”

Montefiore’s license status is listed as active on the Ohio Department of Health’s website as of Dec. 9.

The Ohio Board of Nursing has not confirmed whether it is investigating King and Gelle, who asked that their licenses be put on inactive status as of Oct. 30.

The Ohio Board of Executives of Long-Term Supports and Services, which is responsible for developing, adopting, imposing and enforcing standards for the state’s long-term services and supports leaders, confirmed it received a complaint and is currently investigating Hyman.

The Office of Cuyahoga County Prosecutor Michael C. O’Malley was not investigating as of Dec. 8.

“Our office has not received anything related to this matter,” Tyler Sinclair, public information officer for the prosecutor’s office, wrote in an email to the CJN.

In response to a CJN inquiry, Lucas Sullivan, deputy press secretary for the Ohio Attorney General’s Office, wrote Dec. 7, “We received your inquiry about Montefiore and at this time the AG has no comment.”

The U.S. Attorney’s Office on Dec. 7 would not confirm or deny an investigation is underway.

“I am unable to confirm or comment on any type of potential or ongoing investigation,” wrote Daniel Ball, public affairs officer for the U.S. Attorney’s Office, Northern District of Ohio.

A state agency is investigating the former administrator of Montefiore in connection with falsified COVID-19 testing at the Beachwood nursing home.