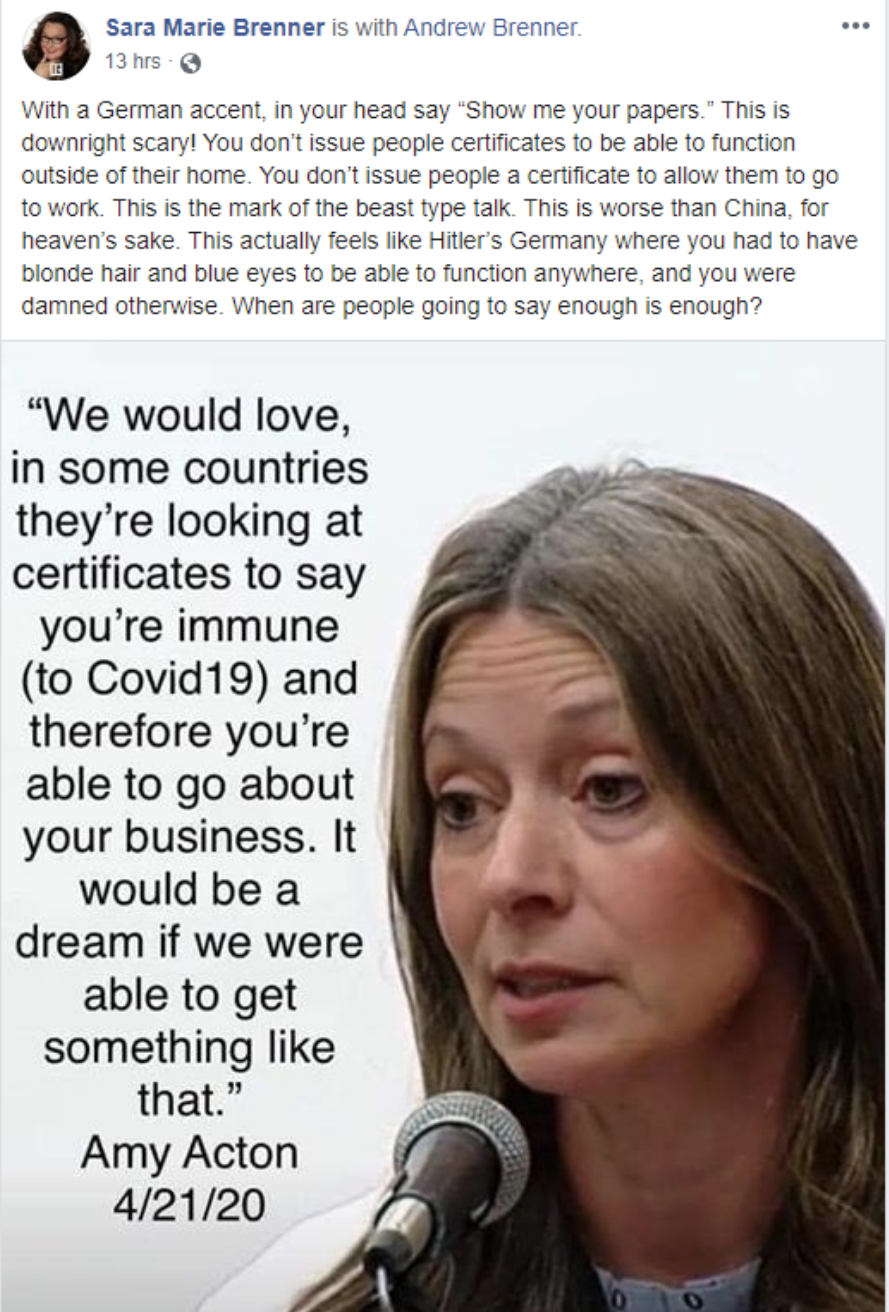 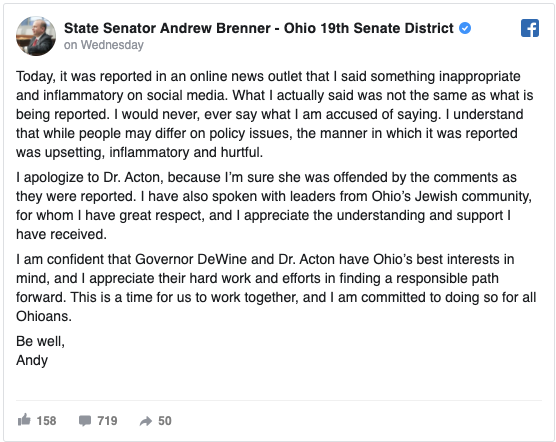 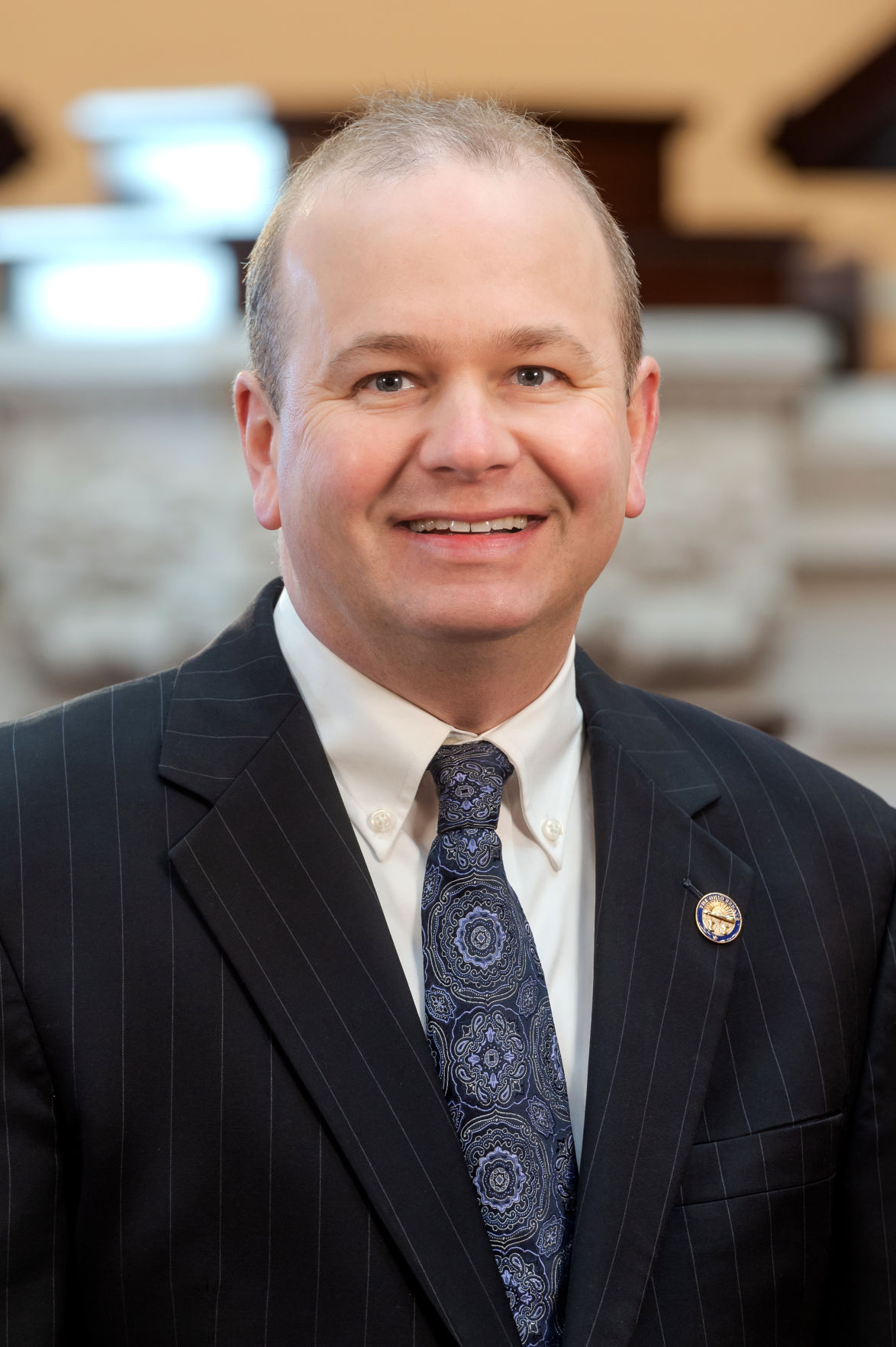 Ohio state Sen. Andrew Brenner issued an apology for Facebook comments he and his wife made this week comparing a statement Dr. Amy Acton made about re-opening businesses to being in Nazi Germany.

“I have always had a strong relationship with the Jewish community, and firmly believe using the Holocaust as an analogy or comparison for a public policy debate is offensive and demeans the tremendous sacrifices and atrocities Jews endured during World War II,” Brenner wrote in a statement emailed to the CJN on April 24. “I apologize for statements that were tied to my social media that were hurtful.”

Brenner, a Republican who is in his first term and serves District 19, which includes Delaware and Knox counties and part of Franklin County, declined further comment.

Acton’s statement that Brenner’s comments stemmed from came when the Ohio Department of Health director said during the April 21 COVID-19 press briefing, “In some countries, they’re looking at certificates to say you’re immune and therefore you’d be able to go about your business. It would be a dream if we could get something like that.”

In response to Acton’s statement, Brenner’s wife, Sara Marie Brenner, posted on Facebook with Acton’s original statement: “With a German accent, in your head say ‘show me your papers’... This is downright scary! You don’t issue people certificates to be able to function outside their home. ... This actually feels like Hitler’s Germany where you had to have blonde hair and blue eyes to be able to function anywhere, and you were damned otherwise. When are people going to say enough is enough?”

Sen. Brenner then posted: “We will never allow that to happen in Ohio.”

On April 22, Gov. Mike DeWine condemned Brenner’s and his wife’s posts via Twitter.

DeWine tweeted: “The recent Internet post by Ohio State Senator Andrew Brenner, likening Ohio’s Department of Health Director’s actions to fight the corona virus to those taken by Nazis in Germany during World War II, must also be condemned. The comments showed a complete lack of understanding of the Holocaust – made even more offensive by posting on Holocaust Memorial Day – and was a slur on a good, compassionate, and honorable person who has worked non-stop to save lives and protect her fellow citizens. ...”

DeWine had also condemned those carrying anti-Semitic signs during an April 18 stay-at-home protest outside the Ohio Statehouse in Columbus.

James Pasch, regional director of the Anti-Defamation League in Cleveland, told the CJN, “I concentrated on what the senator said, and it’s outrageous and beyond misguided. On the eve of Holocaust Remembrance Day, to put out a statement that insults the memories and the lives of the millions of people that were killed and brutalized by the Nazis by comparing Dr. Acton and Gov. DeWine’s efforts to Nazi Germany, it’s unconscionable. It should never happen, and there is no excuse for it.”

JewishColumbus’ director of Jewish community relations Justin Shaw told the CJN he chooses to believe Brenner when Brenner said his comments were misunderstood.

“Anytime this type of thing happens, ‘cause this is obviously not the first time a politician has made comments like this, we work to educate them,” Shaw said. “We work with whoever to make sure that they know the power of the words that they’re using because sometimes it’s intentional, sometimes it’s unintentional. In this case, we’re going to try to take them at their word that it wasn’t intended the way that they were making it sound.”

“This is not a political issue,” Shapiro told the CJN. “It’s an issue of dangerous rhetoric. I hope that he realizes that the condemnation came from all sides and that he takes those comments to heart and really learns from them. It is important that we keep the memory alive and that we honor those who perished in the Holocaust.”

“It is terrible in any sense of the word, especially given the hard work and dedication that Dr. Acton has shown in the last few weeks to keep the people of Ohio safe,” Leland told the CJN. “There couldn’t be a greater contrast between those two concepts, between the systematic almost industrial genocide that was promoted by Nazi Germany and the proactive, empathetic, conscientious activities of Dr. Acton to save thousands of lives.”

In an emailed statement to the CJN, Jewish Community Board of Akron CEO Todd Polikoff said: “The Jewish Community Board of Akron thanks Gov. Mike DeWine for his forceful condemnation of the hate and anti-Semitism on display at the statehouse this past week. Additionally, we appreciate the governor’s rebuke of the comments associating the stay-at-home directives from Ohio’s Department of Health Director with those of the Nazis in World War II. The comments – egregiously made on Holocaust Remembrance Day – were not only a disturbing distortion of history, they were disrespectful to the memory of the millions who perished at the pernicious hands of hatred and bigotry.

“JCBA is greatly appreciative for the efforts of Ohio elected officials, at all levels, who are working tirelessly to keep our communities safe and healthy. We are also immensely grateful for the first responders, medical and public health professionals, food service and grocery workers, and all others heroically keeping our society running during this incredibly trying time.”

Rabbi Areyah Kaltmann of Chabad Columbus in New Albany reflected on Brenner’s post, still feeling the wounds from seeing a protester against the stay-at-home order carrying an anti-Semitic sign April 18 outside the Ohio Statehouse.

“Our tradition is based on the power of words,” Kaltmann told the CJN. “In these times, we must all come together through words of healing. Ohio is leading the nation through the policies of our Gov. DeWine and Dr. Amy Acton. The Holocaust is very personal to me, as it is to every person of conscience.”

The recent Internet post by Ohio State Senator Andrew Brenner, likening Ohio’s Department of Health Director’s actions to fight coronavirus to those taken by the Nazis in Germany during World War II, must also be condemned.