This article was edited at 1:47 p.m. Oct. 13 to correct the date Blake Rogers was terminated.

Rogers was terminated Feb. 22, in connection with an officer-involved shooting at Beachwood Place June 27, 2019. He and his wife, Jacalyn, have sued the city of Beachwood, partly over the length of time the investigation took. That lawsuit is pending in U.S. District Court of the Northern District of Ohio.

Rogers was fired 20 months after he shot and injured a shoplifting suspect in the Beachwood Place parking lot. He faced a criminal and internal review and received a “no bill” from Cuyahoga County Court of Common Pleas regarding felony charges in the shooting, meaning no felony was committed. Rogers was on paid administrative leave at an annual salary of $92,206.40 plus benefits starting from the day of the shooting.

“We are currently exploring all of our options, including a possible appeal,” a statement from the Beachwood Law Department and the office of Mayor Martin S. Horwitz reads. “We will be consulting with our outside counsel, Mr. (Barry) Freeman, on the issue of re-instatement.”

The city accused Rogers of violating four sections of Beachwood Police Department’s use of force policy, three of its standards of conduct and its ethics code.

The Fraternal Order of Police/Ohio Labor Council, in an Oct. 13 news release, said the arbitrator's ruling "found that the city of Beachwood treated Officer Rogers in a disparate manner and that it committed numerous due process errors in the handling of the disciplinary action against Officer Rogers."

Quoting the ruling, the news release stated, "the city did not have just cause to terminate the grievant."

In addition, the release stated,"the arbitrator sustained a second grievance finding that the city wrongfully released disciplinary documents to the local news prior to him being terminated."

"The arbitrator issued the only decision that he could in this case based on the evidence presented," Gwen Callender, executive director of the Fraternal Order of Police, Ohio Labor Council Inc., said in the release. "We have been eagerly waiting for this day to have a neutral arbitrator issue his award after considering the evidence presented by the city and by the union."

She added, "We are eager for the city to reinstate Officer Rogers to continue his record of loyal and professional service to the citizens of Beachwood." 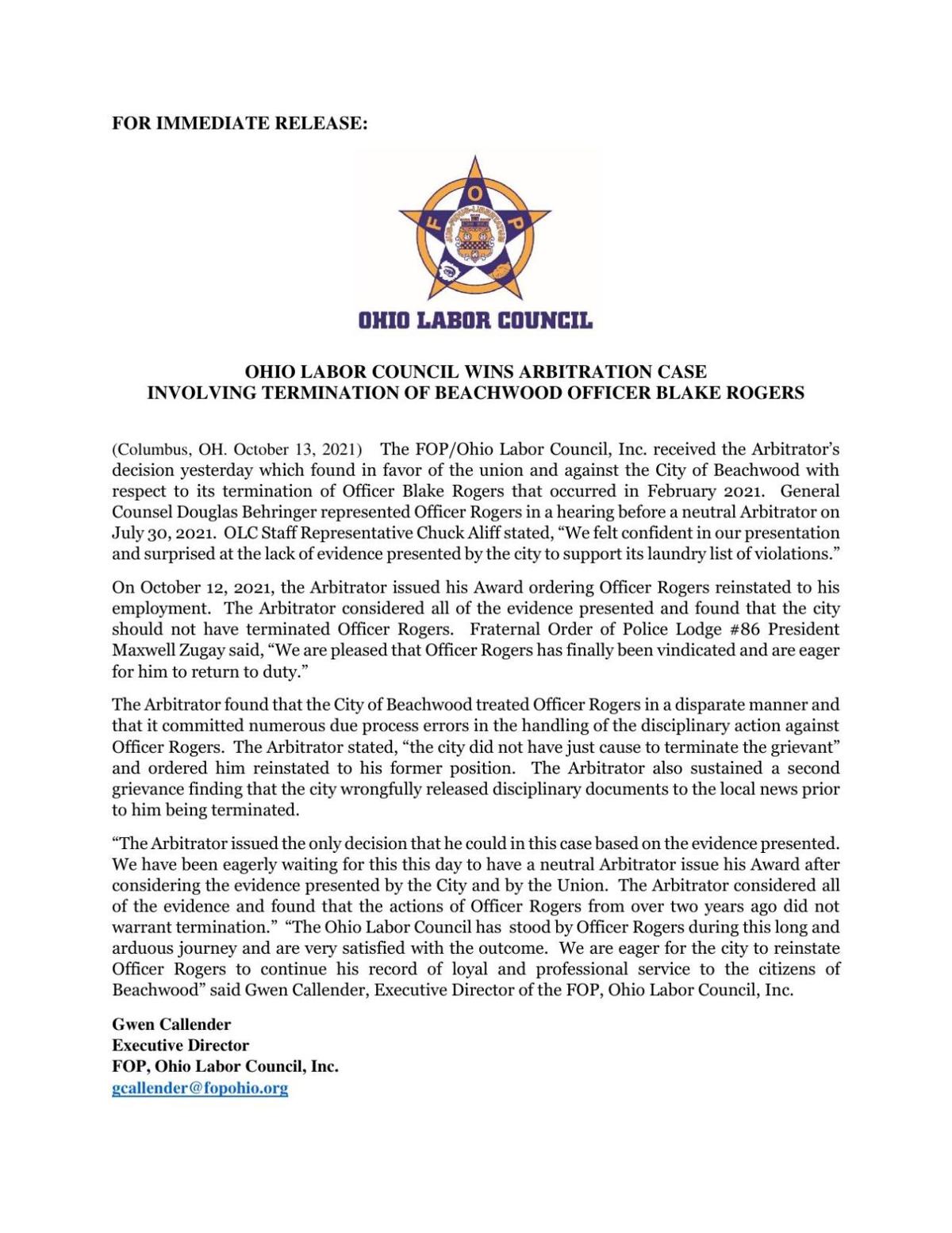 Rogers and his wife, Jacalyn, have sued the city of Beachwood, partly over the length of time the investigation took. That lawsuit is pending in U.S. District Court of the Northern District of Ohio.

The lawyer for a Cleveland man who was shot by a Beachwood police officer at Beachwood Place on June 27, 2019, during a shoplifting incident f…