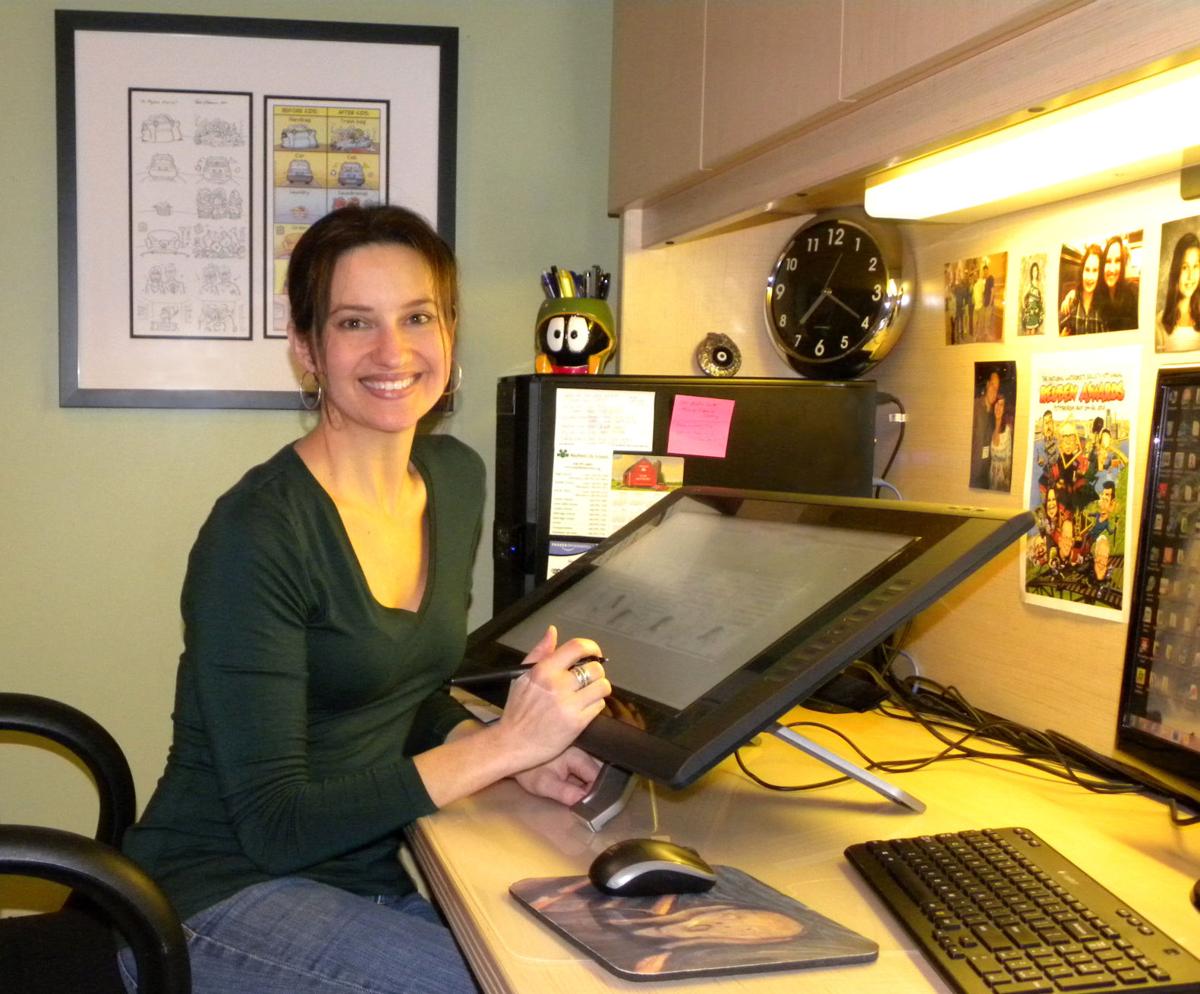 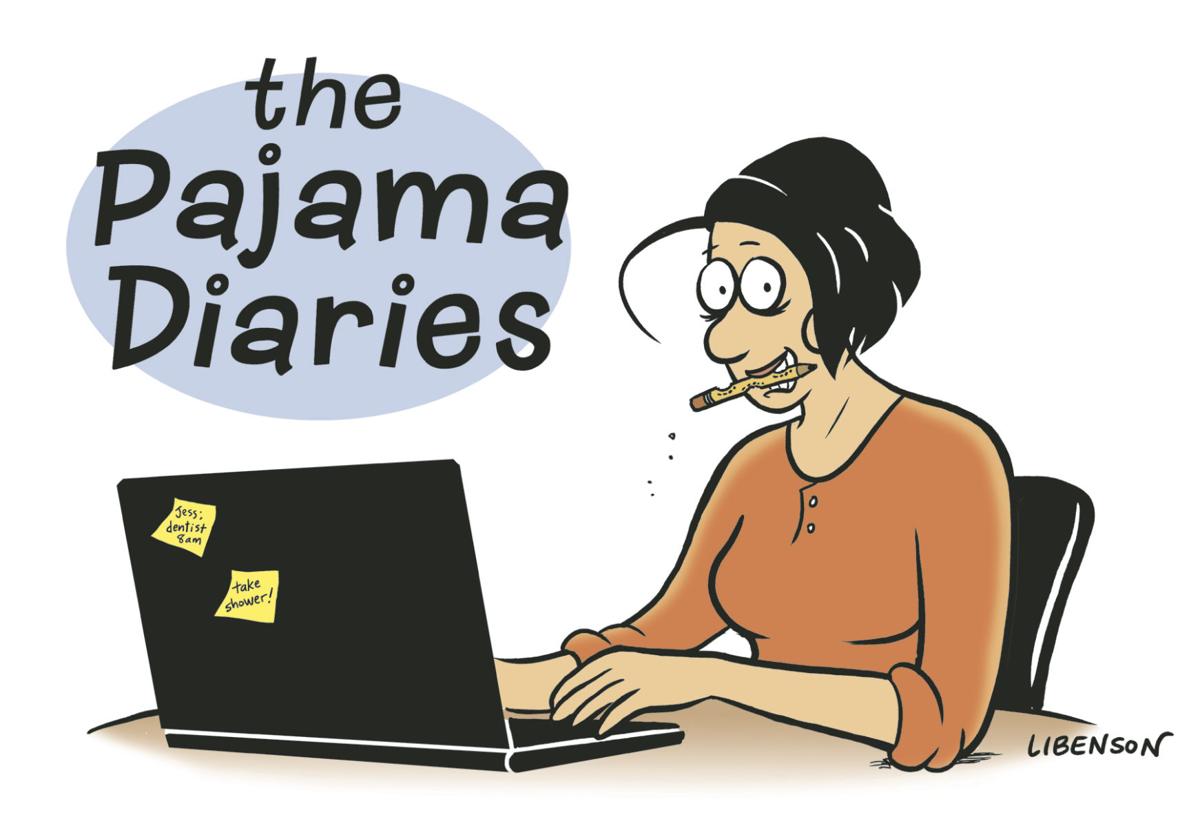 Jill Kaplan from “The Pajama Diaries,” created by Terri Libenson.

Newspaper comics readers might notice something different in their papers when browsing the funnies.

The space where Jill Kaplan, a Jewish mother and wife living in Ohio with her family, experienced everyday life but with a humorous, modern twist in “The Pajama Diaries” for about 14 years will be replaced with panels of another adventure.

The comic’s creator, Terri Libenson, retired the sketched family that appeared in hundreds of newspapers across the globe from Cleveland to Toronto to Sacramento, Calif., to New Dehli Jan. 4 to focus her efforts on penning her middle grade-age series “Emmie & Friends.”

“It was not an easy decision at all,” said Libenson, a resident of Mayfield Heights and member of Anshe Chesed Fairmount Temple in Beachwood. “I wasn’t planning to retire – at least not quite this soon. My children’s books have kind of taken over in a very nice way, but it unfortunately left me with the decision of ending the strip because I just can’t do it all anymore.”

The 49-year-old has been infatuated with comics since she was a child growing up in Pennsylvania. She recalls poring over pages of “Peanuts” in elementary school and drawing Snoopy and Woodstock on everything she could find. She collected graphic novels and comic books of all kinds, doodled comics for her high school newspaper, and after going to college to learn illustration – still unsure of what she wanted to do, she looked down and saw she had written all her college assignments in a cartoony fashion.

“And that’s when I realized I think this may be a direction I might be headed in whether I know it or not,” she said. “I think between the humor, the art and the childlike qualities, comics are just the perfect trifecta for me.”

She started submitting comic strips to syndicates after college, and after getting successfully syndicated to craft a weekly comic in 2000 for a bit, she became syndicated with King Features Syndicate in 2006 to invent “The Pajama Diaries” daily.

“I tend to glean my ideas from reality, and with ‘The Pajama Diaries,’ I had started having kids and my life was going in a different direction,” Libenson said. “I was a working mom with two really young daughters, and I was reading a lot of books and articles sort of about myself, like these stressed-out moms multitasking and trying to do everything for everybody at once.

“And that’s when the idea kind of struck. It’s like, ‘Oh, this would actually make a great cartoon character,’ because I haven’t really seen one quite like that in the funnies, especially from a first person point of view who happened to be a very stressed-out mom. I wanted to reflect those realities and reach out to other parents as well.”

From “The Pajama Diaries” came main character Jill, Libenson’s alter-ego, a freelance graphic designer mom who juggles her familial roles with everything else life has to offer except, “she’s a lot more outgoing and speaks her mind a little bit more than I do,” Libenson said. Jill’s husband, Rob, is modeled after Libenson’s husband, Michael Davis, and Amy and Jess after Libenson’s now-teenage daughters, Mollie and Nikki Davis.

Libenson would take inspiration in her life mixed with fiction and any other messages she wanted to imbue to create the Kaplans’ lives, and the characters aged up each year.

She watched joyfully as the comic grew in circulation and attention, but as time grew, she embarked on new projects. Her adoration of storytelling brought her to writing a series of silly, drama-filled middle grade-age books.

The process of balancing the comic and the series consisting of “Invisible Emmie,” “Positively Izzy,” “Just Jaime,” upcoming “Becoming Brianna,” a fifth book and a guided journal she was asked to undertake, became one that Libenson could only solve if she could bring Jill to life for assistance.

“To be honest, I find writing to be more of a thrill now than doing the art,” she said. “It’s scary, but it’s something that’s challenging and really keeps me focused. I still enjoy doing art too, but it’s just a little more mindless. As far as cartooning goes, I feel like I’ve reached the point that I probably will in that area.”

She planned to retire from “The Pajama Diaries” at the end of her 15-year contract with King Features Syndicate next year, but as the book deadlines piled up, Libenson rethought if her planned comic retirement was too far away.

“When they offered me the contract of this guided journal, I had a choice to make,” she said. “I could’ve kept up with the strip if I didn’t do the journal, but I really wanted to do it, and it’s turning out to be the most incredible project.

“But it was a really tough decision. The characters got older and Jill and Rob were almost empty nesters, so I thought this might be it.”

Libenson looks forward to finishing her book series and stretching her creative wings in new forms of media, but for now, her future is unwritten pages.

“I would love to do other book projects, whether it’s a new series, a standalone book or even doing younger kids’ books like picture books,” she said. “I’d also like to do other types of writing too, whether it’s a different kind of comic, something for the web or just any other projects. But I’m not sure yet; it’s both fun and scary.”

While the Kaplans said their goodbyes Jan. 4, “The Pajama Diaries” fans can enjoy their favorite moments on Comics Kingdom’s website at comicskingdom.com where all panels will be archived.