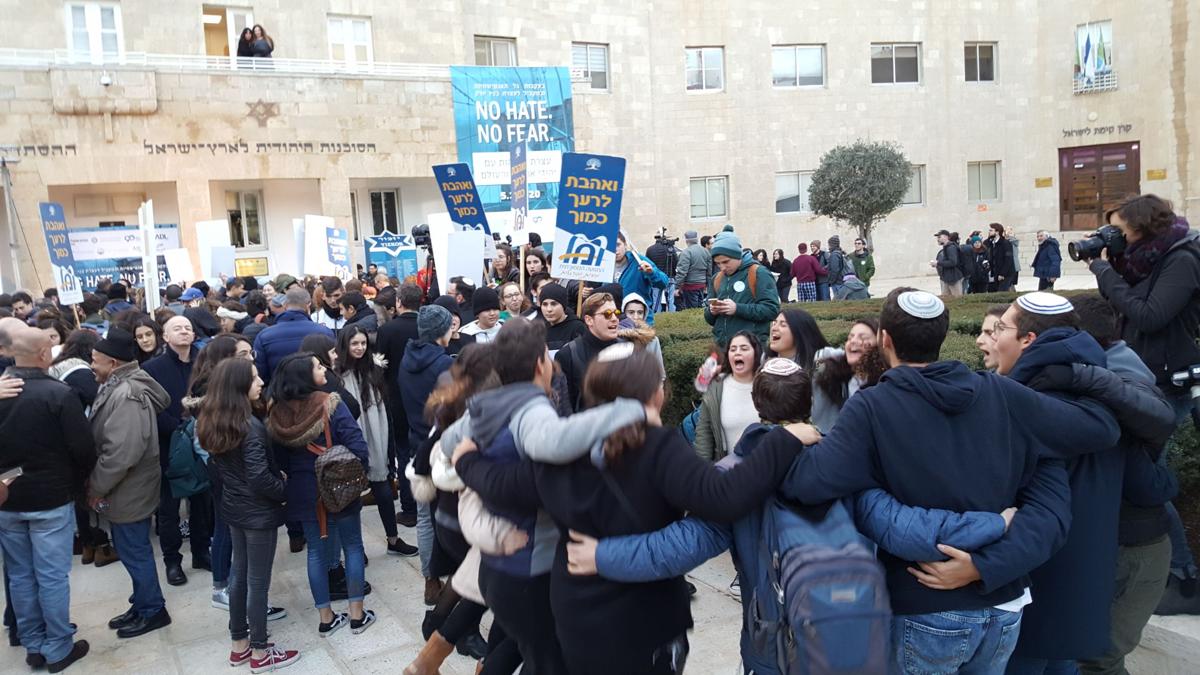 People sing “Am Yisrael Chai” at the Jerusalem rally. 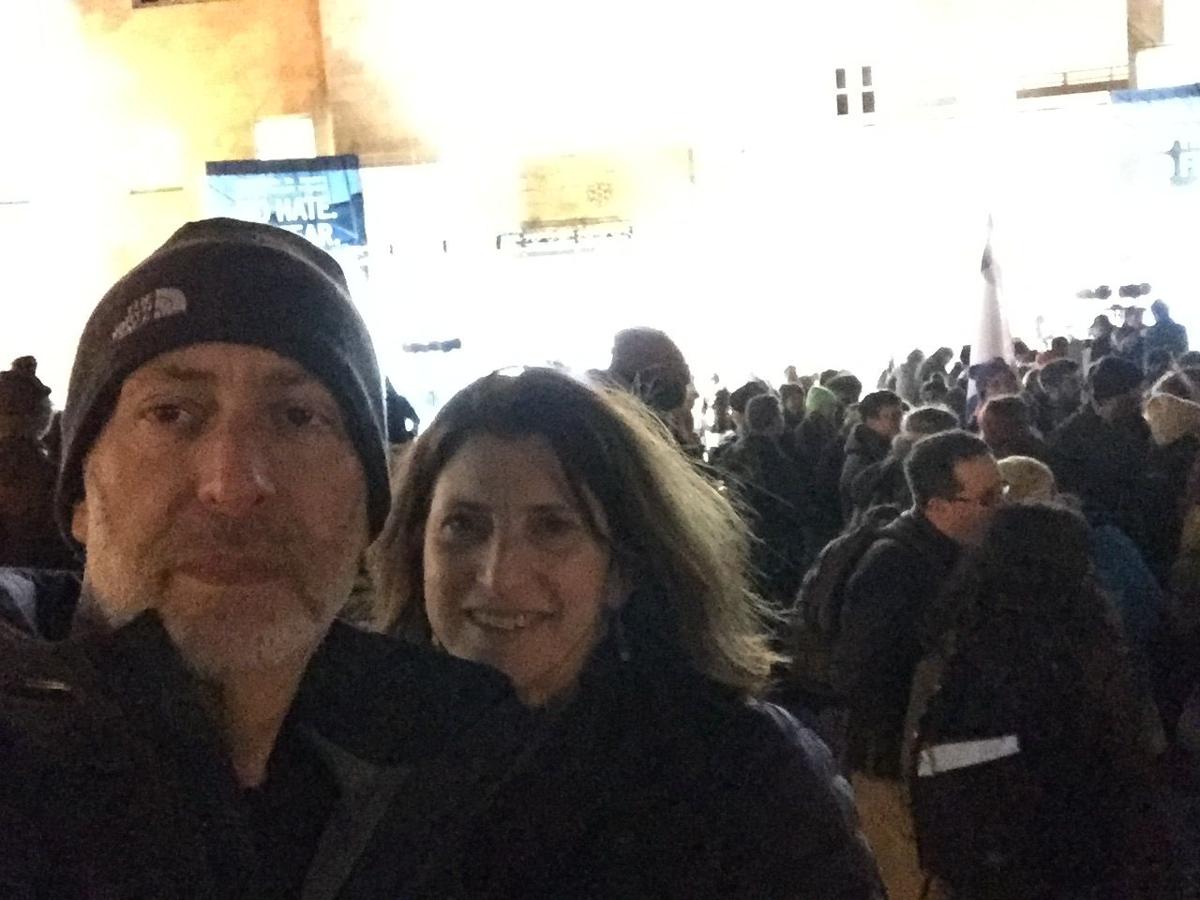 Ari Jaffe and Marlyn Bloch Jaffe attend a rally in Jerusalem on Jan. 5. 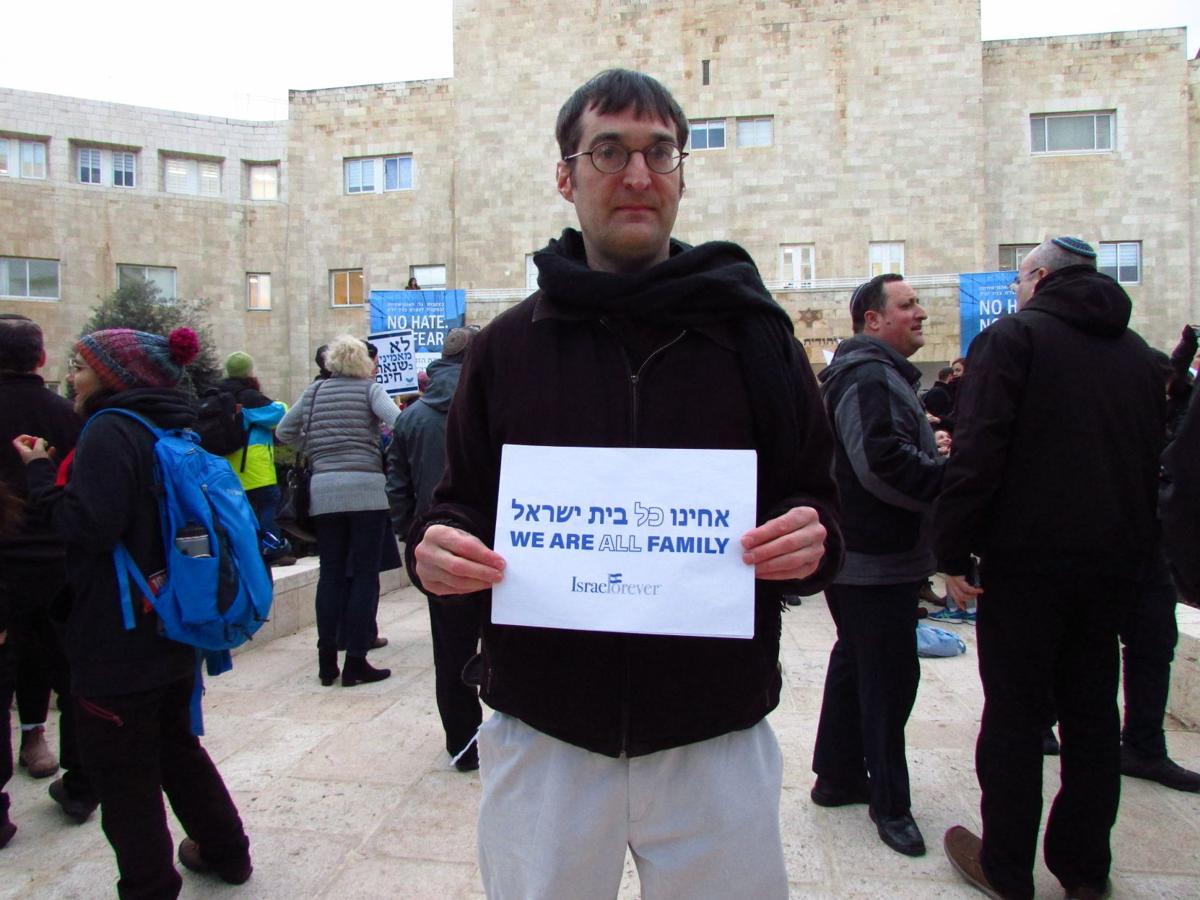 Ben Bresky, who was born in Cleveland and now lives in Jerusalem, said he was moved by many moments during the rally.

Ari Jaffe and Marlyn Bloch Jaffe of University Heights attended the final minutes of the ‘No Hate. No Fear.’ rally Jan. 5 in the courtyard at The Jewish Agency in Jerusalem.

The couple were in Israel to attend their son’s wedding on Jan. 2 in Beth Ness Tziona.

He said American college students made up the majority of attendees at the Jerusalem rally, but there were Israelis there as well, and the speeches were in Hebrew.

Ben Bresky, who lives in Jerusalem and works as a freelance journalist, grew up in University Heights attending Park Synagogue in Cleveland Heights and Pepper Pike.

“I felt it was important to attend because friends from Cleveland were going to attend the rally in New York and I wanted to show solidarity with them,” he wrote the Cleveland Jewish News in an email.

“I was moved by the display of support from both native-born Israels and Americans living in Israel,” he wrote. “The rally was held outside The Jewish Agency building which was the site of many historic events such as the celebrations in 1947 when the U.N. voted to accept the British leaving Israel in favor of a Jewish state.“

Bresky’s mother, Toby Bresky, grew up in Pittsburgh attending Tree of Life Congregation as a child, and Bresky noted the support Israelis gave to Jews in Pittsburgh after the Oct. 27, 2018, shootings.

Bresky said he was moved by the singing of “Hatikvah,” the final song of the rally, and at seeing Israeli teenagers singing and dancing.

The Jewish Agency for Israel, the World Zionist Organization and the Anti-Defamation League organized the event.

Publisher’s note: Ari Jaffe is a member of the Cleveland Jewish Publication Company Board of Directors.

New Yorkers greet Clevelanders with warm welcome at 'No Hate. No Fear.' march

NEW YORK CITY – Some 115 Clevelanders who participated in the “No Hate. No Fear.” march and rally here on Jan. 5 did more than raise the profi…