After 27 residents complained, the city of University Heights received a temporary restraining order against a newly formed synagogue that is operating at 4464 Churchill Blvd.

Meanwhile, the synagogue board board said in an email they have put the house on the market and were seeking alternative locations, according to the court docket.

"We have a procedure, it's a longstanding procedure," Brennan said. "In the instance of one proposed shul, they have filed petition and it's awaiting hearing in March. In the situation of another proposed shul, they have a petition pending and we've been awaiting additional information from them to supplement their application. But in the event of this one, we first received word in early January their intention to open. Residents on Churchill let us know that. We wrote a letter, it came from our law department asking them to cease and desist if this were so... and they have not filed for a permit."

Brennan said he has heard conflicting reports about the intent of the synagogue board going forward.

"They're also welcome to apply for a permit, which they, to date have not done," he said. 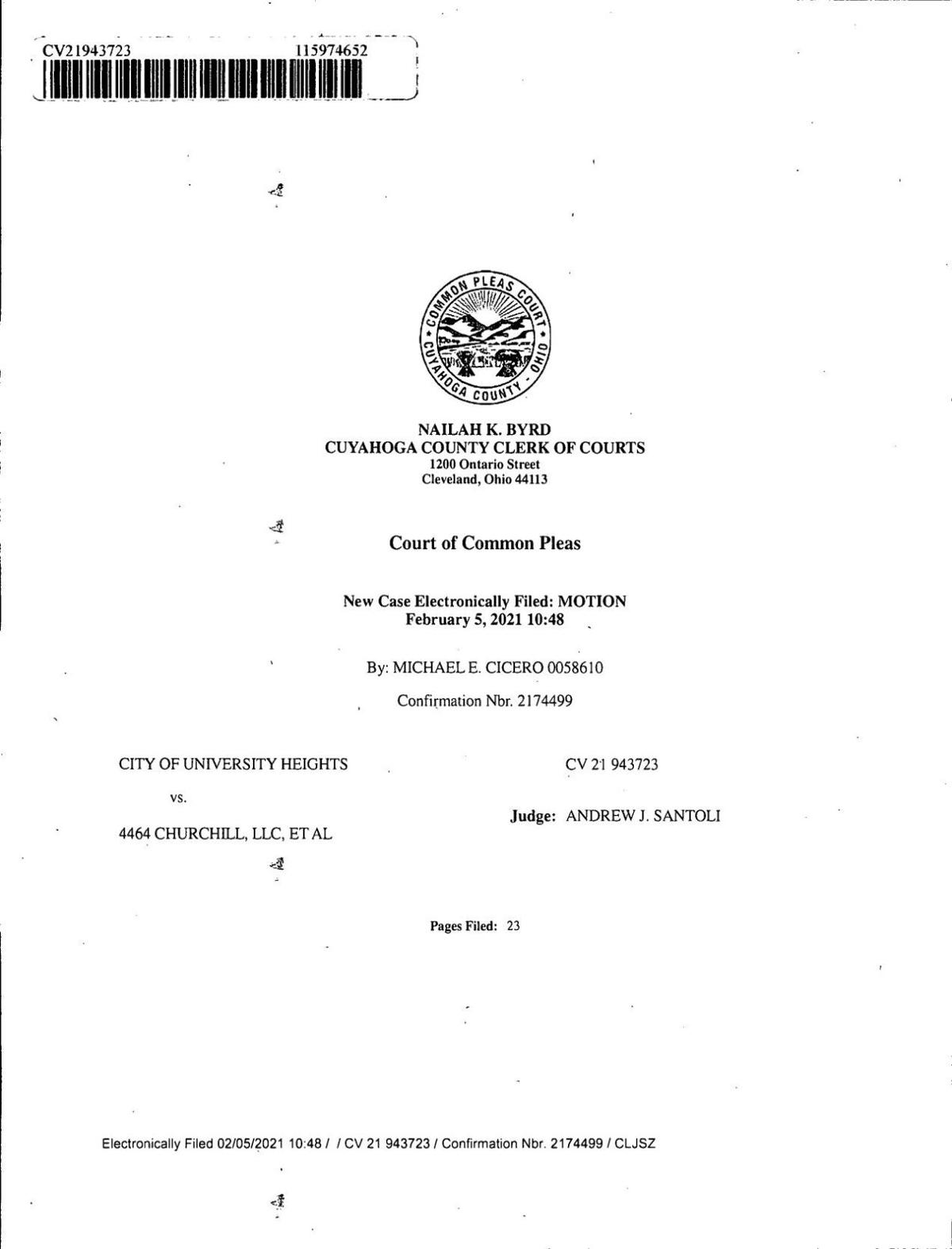 Documents filed in Cuyahoga County Court of Common Pleas Feb. 5, show Kehillat Heichal Hakodesh sent a Jan. 3 email under the heading “your new neighbors,” regarding the opening of a new synagogue.

“We hope this letter finds each of you well,” the letter opens. “Over the course of the past months, we have engaged in a discovery process regarding the potential for opening a new address for Jewish learning and prayer in our growing community. With the help of Hashem and guidance from Gedolei Torah, it is with great anticipation that we hope to open Kehillat Heichal Hakodesh on Feb. 6, Shabbos Parshat Vitro.

"Because these details have just recently concretized, we wanted to reach out to the people in immediate proximity of the shul to create a channel for information and feedback. We welcome the opportunity to discuss any questions or concerns that anyone might have either in person or via zoom, and look forward to an open and fruitful relationship.”

The letter is signed by four board members and includes their telephone numbers. They are Itsy Boim, Chaim Cohen, Shmully Halpern and Jake Pizam.

On Jan. 11, 2021, Luke F. McConville, acting as city attorney, wrote a letter regarding he synagogue operation addressing it “To Whom It May Concern.”

He ordered the use to cease and desist.

In his letter, McConville, who practices at the Cleveland law firm of Nicola, Gudbranson, & Cooper, LLC, also wrote, “The city has also been made aware that improvements and construction are occurring on the premises. The city has no record of any permits being obtained for any improvements or construction on the premises, as required by the city’s ordinances. The city hereby demands that you and/or any agents or contractors immediately cease and desist in the performance or construction of any work, improvements or structures until such time as the requisite permits have been obtained.”

In court filings, the city sought an order from Santoli to allow the city to enter the premises for purposes of inspecting work.

On Feb. 3, David Pollack and Cohen a wrote a follow up email to neighbors, saying they are trying to relocate.

“While we don’t want to be misleading by committing to an unrealistic timeline until we move out, we have identified several other suitable options that will suit our needs,” Cohen and Pollack wrote. “It is in our best interest to move quickly in order for our Shul to operate, grow and function as a full-fledged minyan with daily minyanim. Some of you might have noticed the ‘For Sale’ sign that has recently gone up at the property.

"The house is currently listed on the market for sale. In addition to actively seeking another location for the shul and putting the house on the market to be sold, we are committing to only having minyanim on Shabbos and chagim (we will not have any minyanim on Purim or chol hamoed). We understand that you don’t want many cars clogging the street as is common during minyan times. We will keep any Torah learning during the week to a small group of members only so as not to cause any disturbance or parking issues on the street. We understand that you have doubts regarding our ‘true’ intentions … we fully intend to fulfill what we laid out above.”

The petition is addressed to Chaim Cohen “and related owners of 4464 Churchill Boulevard.”

“We, the residents of Churchill Blvd, request for the sake of peace that you cease your plans for a Torah center/shul on our block at 4464 Churchill. We support your mission to create a new a place of prayer and Torah study in Cleveland. We encourage you to build a new learning center/shul that speaks to members of our growing Jewish community. However – as a residential block in the “City of Beautiful Homes” – we strongly feel that a conversion of a residence to a house of worship in the middle of our block would be detrimental to our way of life and destroy the ambience that makes up our peaceful street.”

The petition cites both city zoning requirements and references Torah.

It closes, “Please help us keep peace by establishing your shul in a different location otherwise, we will, individually and collectively, be forced to pursue all of our legal and/or halachic options.”

This is a developing story. For updates, visit CJN.org

A new University Heights synagogue that faced opposition from neighbors and legal action from the city has shut down permanently, a board memb…