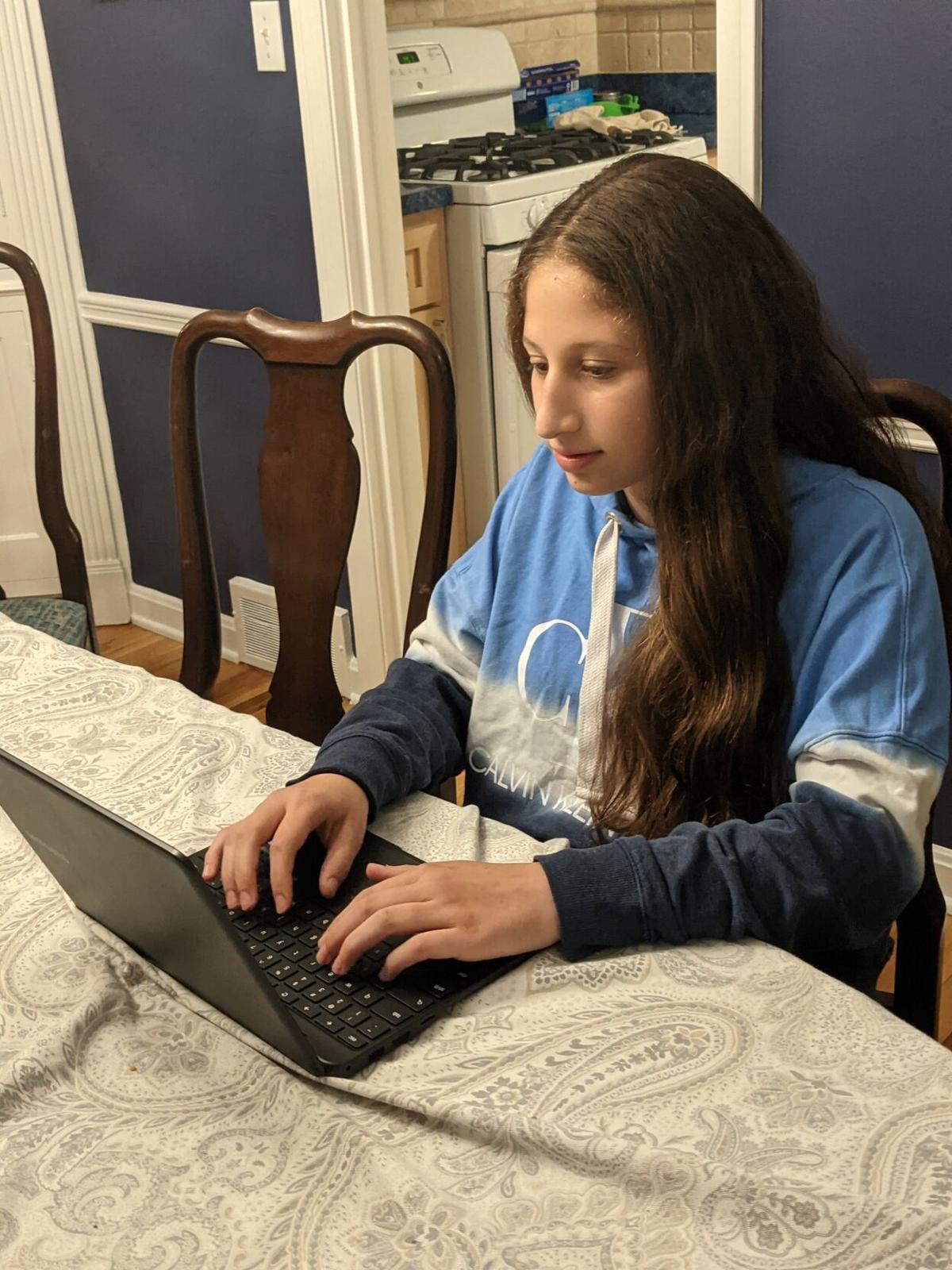 Naava Prero, 13, an eighth grader at Fuchs Mizrachi School in Beachwood, studies on her Chromebook. She said she felt supported by the response immediately following an antisemitic incident in which she was targeted on her street. 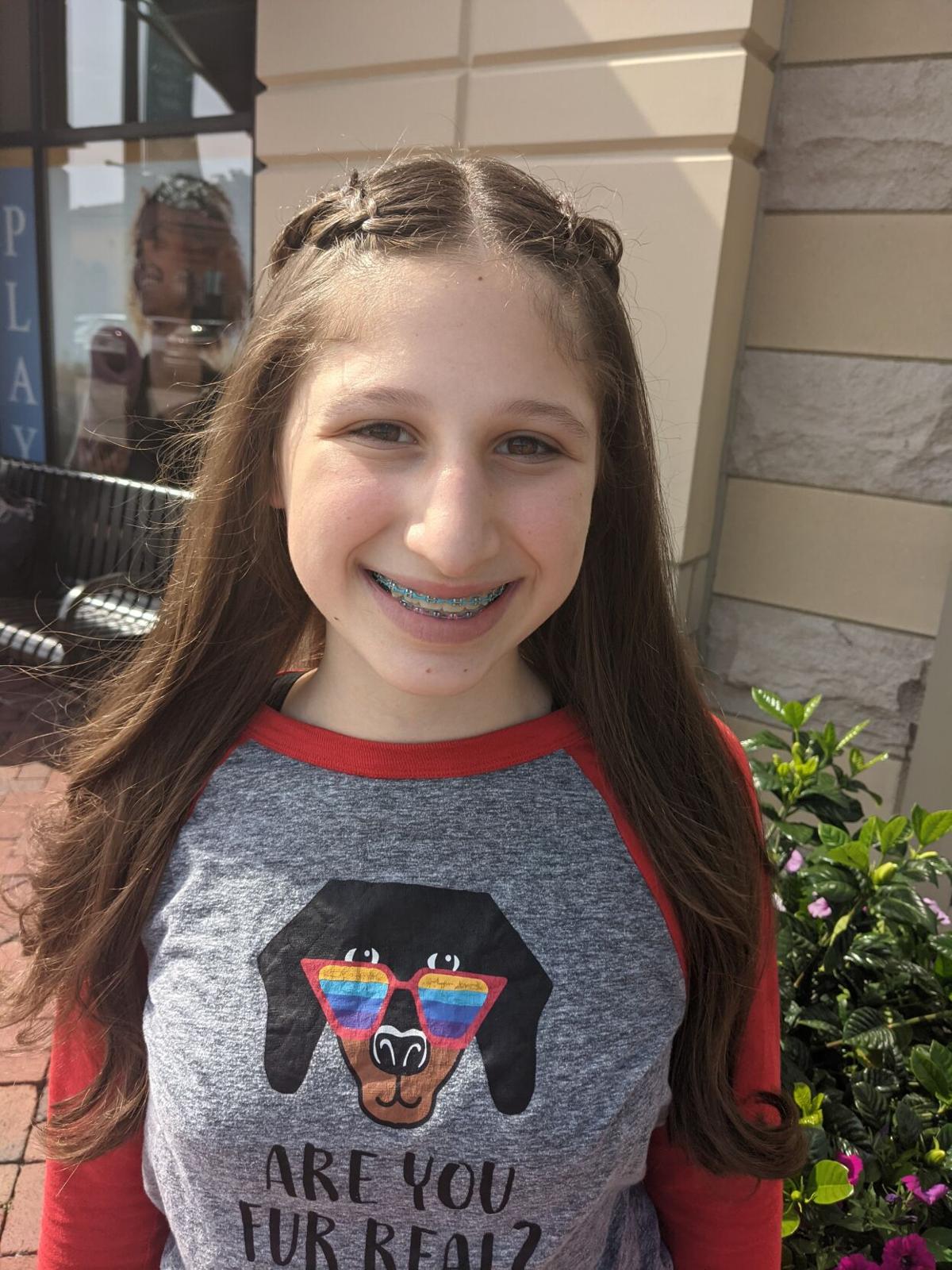 At 13, Naava Prero had never experienced antisemitism and had never been afraid to walk in her neighborhood.

Those things changed for the Fuchs Mizrachi School eighth grader just before 5 p.m. Oct. 5, when she got off the bus in her University Heights neighborhood. The incident started when the driver of a dark blue pickup truck near a corner pulled up to her.

“She yelled some antisemitic slurs and she threw a glass beer bottle at me and then she drove away like really fast,” Naava told the CJN in an interview Oct. 7.

The bottle missed Naava, but the incident left her shaken.

“I didn’t want to run in case they came back and I tripped and fell, so I walked, like, really fast,” she said.

On her way home, she noticed a neighbor walking a dog. Once that person went inside, she said she ran the rest of the way home.

Naava said she initially thought the vehicle was an SUV and later learned that a neighbor’s security camera had caught images of a black pickup truck.

“Their Ring doorbell captured a black pickup truck coming past their house, then turning onto the next street,” she said.

Naava said she was “genuinely in shock” after the incident.

“I’ve heard about these things in school,” said Naava, adding she has been taught the history of antisemitism at Fuchs Mizrachi. “It was just really shocking for me, because it wasn’t something that I expected.”

She said she has envisioned getting kidnapped, “but I’ve never (had) someone say those things or do those things because they’re antisemitic, because I’m just living my life.”

“What if she came back?” Naava said. “What if she’s going to hurt me?”

She said she understood that those are natural reactions, but is shocked that someone would act this way.

“It was unbelievable that someone would even do that to me. ... I think it’s a really horrible thing that people are discriminating against religion,” Naava said. “And especially because I’m not even an adult. ... I got really, really scared.”

University Heights (Cleveland) - ring camera has captured this photo from the attack.Neighbors on Churchill are being asked to check any security footage they may have that captured the license plate at 4:56/4:57pm EDT on October 6th 2021.Pls share with appropriate parties. https://t.co/lsZffzHeVC pic.twitter.com/VQL6AsTpuD

She later spoke with James Pasch, regional director of the Anti-Defamation League, as well. Pasch said the ADL would do whatever it could to assist law enforcement in finding the perpetrator, Prero said.

The next day, Rabbi Avery Joel, head of school at Fuchs Mizrachi, reached out to Naava. In addition, Naava had a conversation with a teacher at Fuchs Mizrachi during her lunch period, which she said helped her “process what happened.” For example, Naava said her teacher let her know that the person “wasn’t specifically targeting me. And she also told me it’s still safe to walk around.”

“It was really nice to know that I had a support system and that someone was there for me,” said Naava, adding Joel’s gesture made her feel like she was cared for.

Naava said a friend also reached out to her at school, which helped as well.

“That really means a lot,” she said.

Naava, who attends Young Israel of Greater Cleveland in Beachwood, said she wondered how the person knew she was Jewish. After talking with her teacher, she realized that the uniform and her neighborhood may have been the reasons she was targeted. At the time of the incident, she was wearing a blue polo shirt and a blue pleated skirt, the uniform of Fuchs Mizrachi.

Naava said she hopes that by speaking out, it will help raise awareness.

“I think it’s an incredibly important thing for people to be educated about. ... People should know it’s wrong,” she said. “And the more people know about it, the more people will react and make it known that it’s not OK to do that.”

Still, Naava said following the incident, her mother had walked her to the bus stop and she got a ride home from school Oct. 7.

“Even if it’s someone yelling slurs, or something like that, report it to the police,” she said, “because it still matters. And it is a hate crime.”

Naava agreed to be interviewed by the CJN in the presence of her mother and with her permission.

Anyone with information regarding the incident is asked to call the University Heights police detective bureau at 216-932-8799.