On patrol with a Monsey Hasidic security force

Despite warnings, the far right was a no-show at Richmond pro-gun rally. So a Jewish food festival went on as planned. 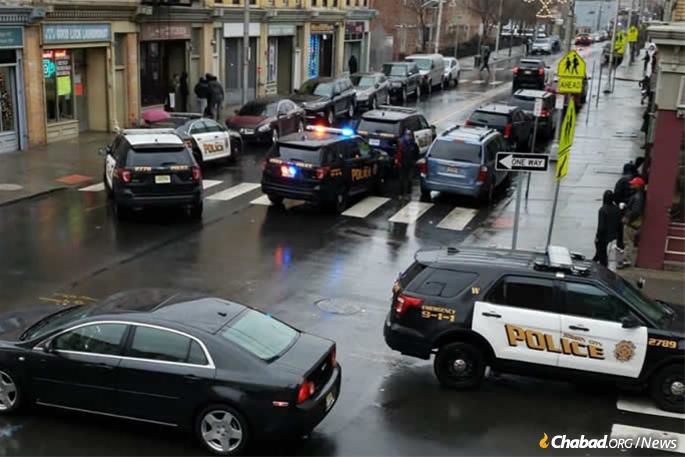 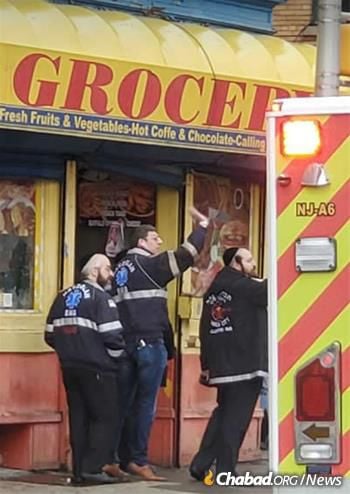 Hatzalah emergency services first responders in front of a grocery a few doors down from the “JC Kosher Supermarket,” a focal point of the Greenville neighborhood’s growing Jewish community.

Three civilians and one police officer were killed in a shooting incident at a kosher grocery store in Jersey City, N.J. An eyewitness confirmed that two of the civilians are members of the local Chassidic community: Leah Minda Ferencz, 33, who owned the store with her husband, Moshe, and Moshe Deutsch, 24. The incident began in a cemetery, where an undercover police officer—Detective Joseph Seals, a married father of five and 15-year police veteran—was shot and later declared dead. Two suspects then ran into the grocery, spraying bullets at random, and after a multi-hour standoff were killed by the police in the store.

With the recent rise in anti-Semitism, there is increased concern around synagogues and other visible Jewish spaces. Jersey City Mayor Steven Fulop stated on Twitter that “based on our initial investigation (which is ongoing), we now believe the active shooters targeted the location they attacked.” But Fulop did not say whether the violence was connected to anti-Semitism or terrorism, and sources close to the investigation dismiss the assertion.

One Chassidic Jew was evacuated to an area hospital with multiple gunshot wounds and is recovering in good condition. Chabad Rabbi Moshe Schapiro, co-director of Chabad of Hoboken and Jersey City, was with the injured at the hospital along with other community members. The wounded individual had slipped out the back door of the store when the shooting began and was struck multiple times.

The shooting happened at the JC Kosher Supermarket at 223 Martin Luther King Drive, a focal point of the Greenville neighborhood’s growing Jewish community. It is next door to a small, yet visible synagogue, said Chabad Rabbi Shmuel Levitin, who directs Chabad Young Professionals of Hoboken and Jersey City with his wife, Esta, and frequents the store.

Moshe Ferencz had left his shop moments before the shooting to pray the afternoon Mincha service at the synagogue and was unable to return to the shop, which he left in the care of his wife, Leah Minda, who was killed in the attack. The Ferenczes have three children.

“I was standing by the salad bar in the grocery, and I heard three shots—bullets shattered the glass of the grocery,” a male eyewitness reported with a trembling voice via WhatsApp. “Suddenly, I saw two people come in, with long black raincoats and long guns. They tried to point the gun at me. I pushed it away and ran away."

Above the synagogue is a Chassidic school with 40 children, who were sheltered in place throughout the incident. A private school across the street was also placed on lockdown. The children were eventually dismissed safely.

Two more police officers were wounded in the shooting. Police are describing the suspects as two males who were dressed in dark clothing.

In recent years, approximately 100 Chassidic families, priced out of Williamsburg and other Brooklyn neighborhoods, have settled in Jersey City. Its proximity to Manhattan has also attracted young Jews of all backgrounds, who can easily commute to work, many of whom have become active in the Chabad Young Professionals community.

Copyright and reproduced with permission from chabad.org

“Conference of Presidents leaders express solidarity for the Jewish community and all the residents of Jersey City, where it appears members of the community were wounded by gunfire, as were members of the police force responding to gunfire from active shooters. We do not know at this point if the kosher supermarket from which they were firing was an intended target. We pray for the safety of all those involved."

(JTA) — The gunmen who entered a Jersey City kosher supermarket and engaged in a deadly shootout with police deliberately chose the store, the…