Over anti-Semitism, US State Department ends ties with Islamic charity 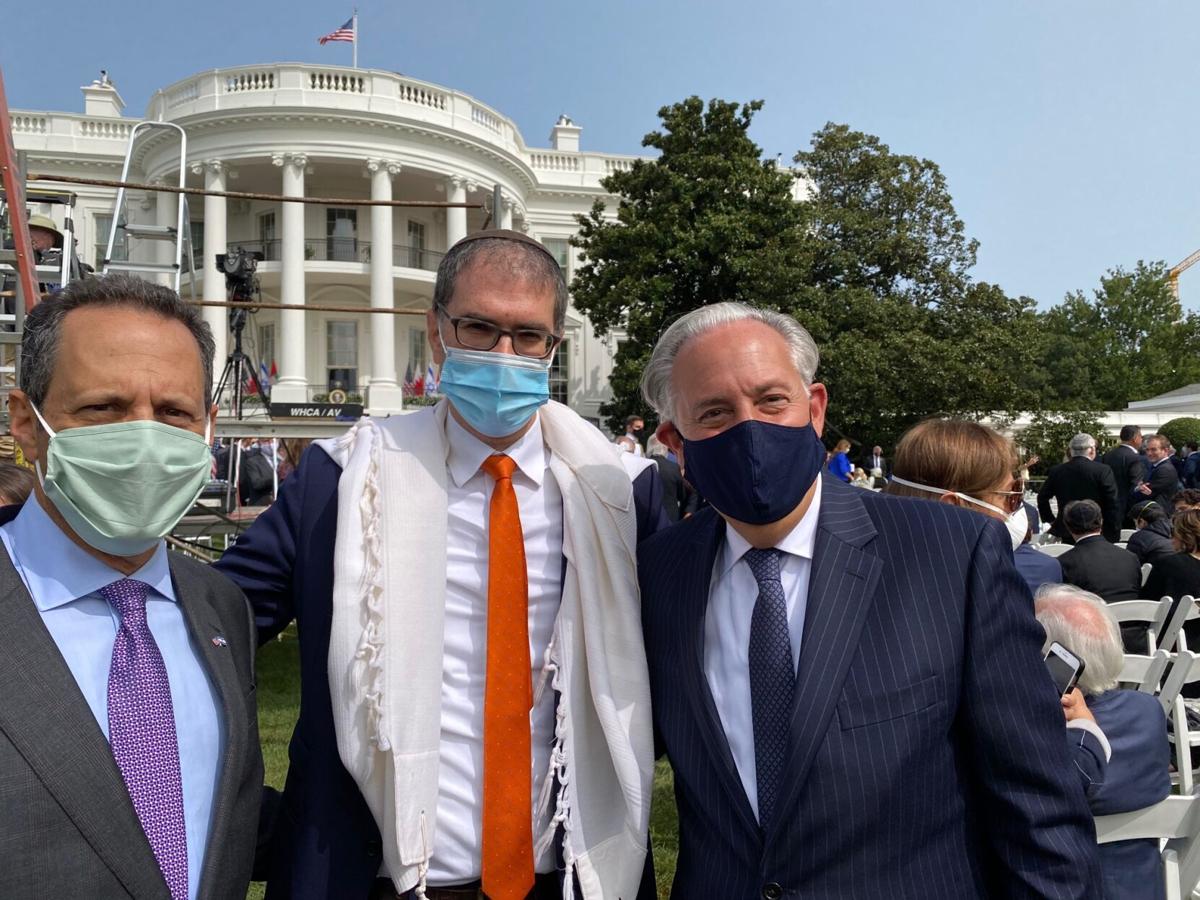 Mark Wilf, chair of the Jewish Federations of North America, from left, Rabbi Yehuda Sarna, chief rabbi of the United Arab Emirates, and Eric D. Fingerhut, president and CEO of JFNA, at the South Lawn of the White House prior to the signing of the Abraham Accords Sept. 15. 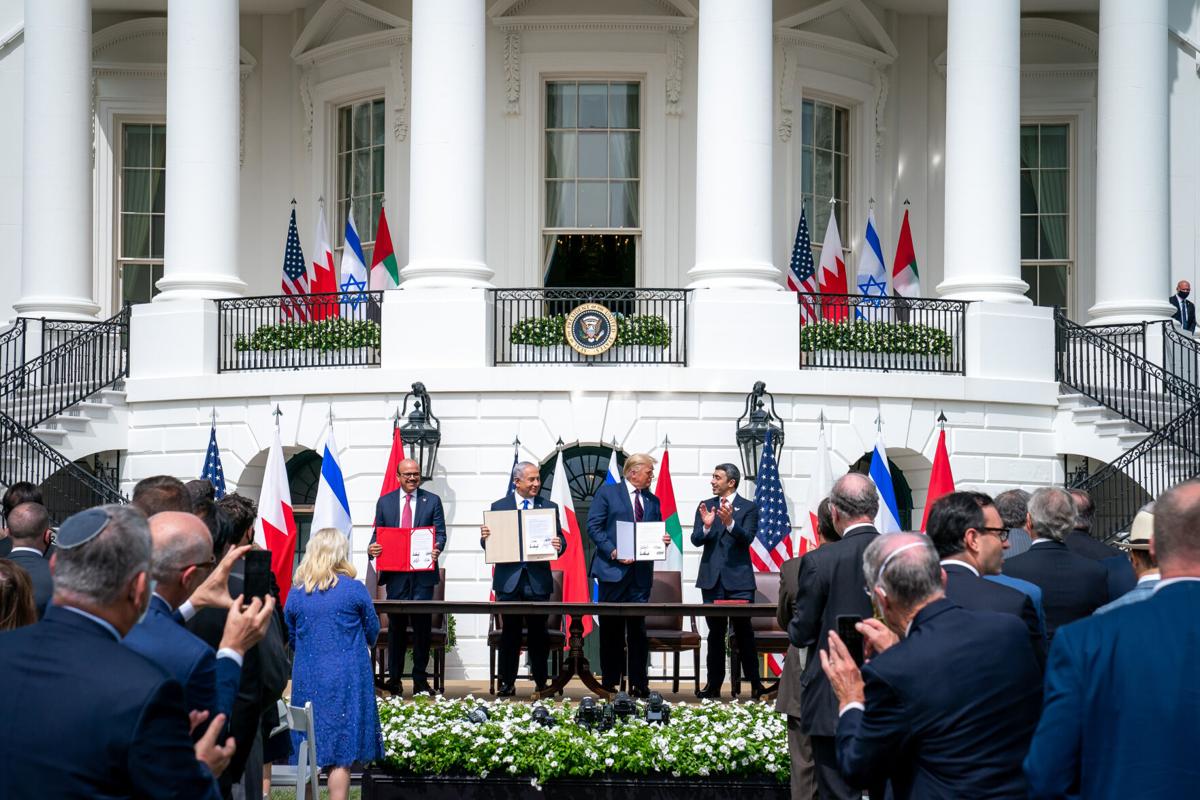 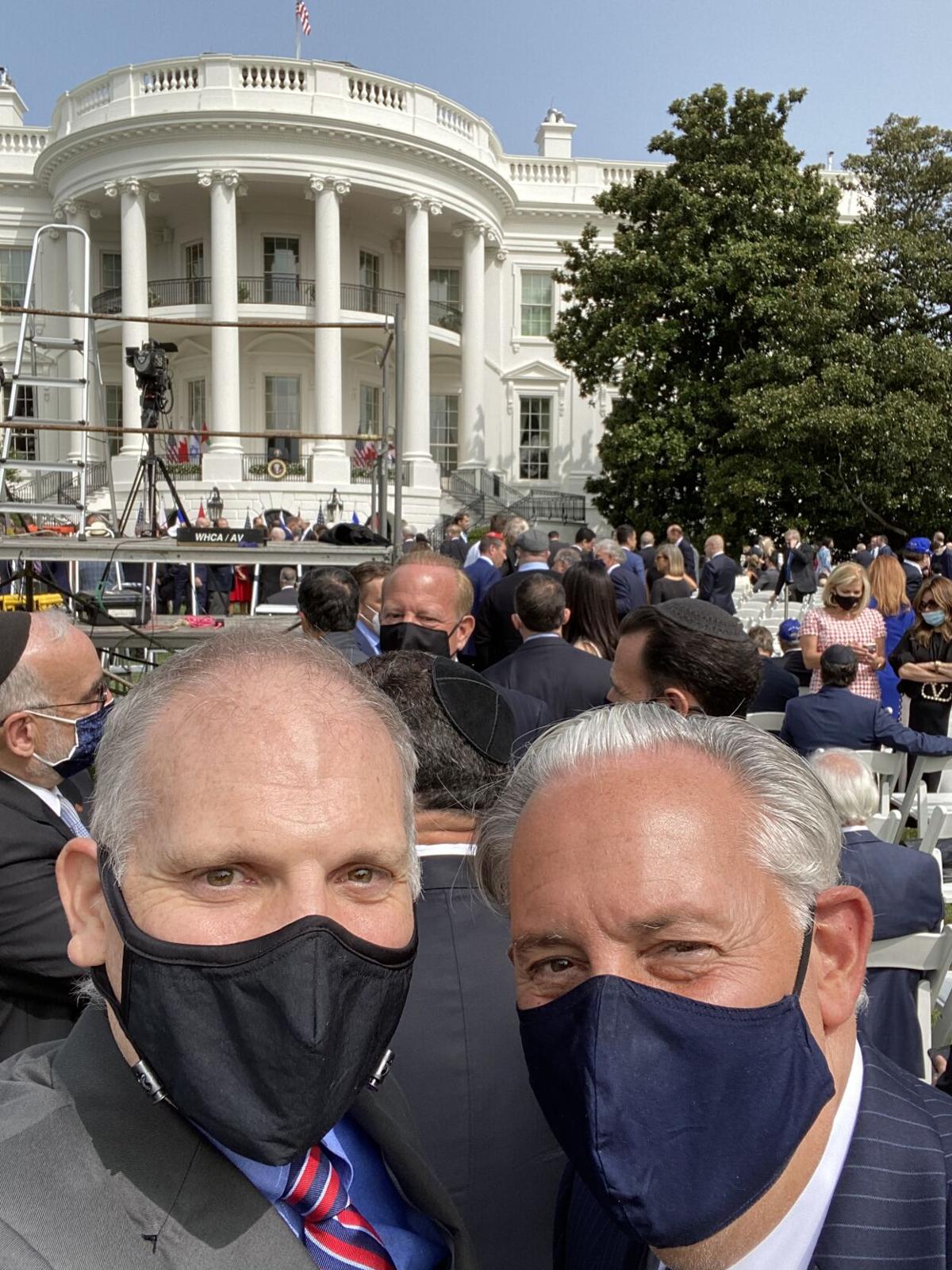 William Daroff, left, and Eric Fingerhut attend the signing of the Abraham Accords at the White House Sept. 15.

Mark Wilf, chair of the Jewish Federations of North America, from left, Rabbi Yehuda Sarna, chief rabbi of the United Arab Emirates, and Eric D. Fingerhut, president and CEO of JFNA, at the South Lawn of the White House prior to the signing of the Abraham Accords Sept. 15.

As President Donald Trump hosted Israel’s prime minister and foreign ministers from Bahrain and the United Arab Emirates to sign treaties normalizing relations between Israel and two of its neighbors, two former Clevelanders had a front row seat to history.

Eric D. Fingerhut, who is president and CEO of the Jewish Federations of North America, and William Daroff, who is CEO of the Conference of Presidents of Major American Jewish Organizations, were invited to the South Lawn of the White House in Washington, D.C., for the Sept. 15 signings.

Following the ceremony, Fingerhut flew to the UAE to spend Rosh Hashanah.

Fingerhut remembered two previous signings he attended. He was in college when Anwar Sadat, then president of Egypt, went to Jerusalem, and in Congress when King Hussein of Jordan and Israel’s then-Prime Minister Yitzhak Rabin signed their treaties in Washington. Both addressed Congress as well.

“I feel the same way today,” Fingerhut told the Cleveland Jewish News Sept. 15, following the signing. “I feel that we’re at a historic moment, a turning point for our beloved state of Israel.”

At the signing, Trump said more such agreements will follow these first two in more than a quarter of a century. Until Sept. 15, Israel had similar agreements with just those two other Arab countries, Egypt and Jordan.

“We’re here this afternoon to change the course of history,” Trump said. “After decades of division and conflict, we mark the dawn of a new Middle East.”

On the invitation of Rabbi Yehuda Sarna, chief rabbi of the UAE, Fingerhut will spend Rosh Hashanah in Dubai with members of the Jewish community of that country. Most, he said, are ex-patriots, who came to the UAE on business. He said JFNA will help build the Jewish community of that country, already several thousand strong, as it enters an era of peace with Israel.

“It was really wonderful,” said Daroff, who grew up in Shaker Heights. “There was a historic wind blowing. And it was very evident that we were witnessing history, that we were witnessing a new breeze that is blowing where relationships between Israel and Arab states are palpably different and palpably better than they have ever been and a real feeling across the board from all the participants. This is the beginning of a process that has been long overdue and one that we can look forward to bring further progress over the months and years ahead.”

Trump, speaking from the balcony facing the South Lawn, explained the agreement as, “Israel, the United Arab Emirates and Bahrain will establish embassies, exchange ambassadors, and … cooperate as partners across the broad range of sectors from tourism to trade and health care to security. They’re going to work together. They are friends.

“The Abraham Accords open the door for Muslims around the world to visit the historic sites in Israel and to peacefully pray at al Aqsa mosque in Jerusalem, the third holiest site in Islam.

“Together these agreements will pave the way for a comprehensive peace across the region, something which nobody thought was possible, certainly not in this day and age,” Trump said. “One found on shared interests, mutual respect and friendship.”

“I want to also express my gratitude for all Israelis who worked for years, sometimes in less sunny times, to bring this day, and I thank each and every one of you,” Netanyahu said. “This day is a pivot of history. It heralds a new dawn of peace. For dozens of years, the Jewish people have prayed for peace. For decades, the Jewish state has prayed for peace. And this is why today we’re filled with such profound gratitude.”

He thanked Trump for his “decisive leadership.”

“You have unequivocally stood by Israel’s side. You have boldly confronted the tyrants of Tehran,” he said, referring to Iran. “You’ve proposed a realistic vision for peace between Israel and the Palestinians and you have successfully brokered the historic peace that we are signing today, a peace that has broad support in Israel, in America, in the Middle East, indeed in the entire world.”

He thanked the leaders of the UAE and Bahrain, “for joining us in bringing hope to all the children of Abraham.”

Netanyahu spoke in Arabic, wishing all of Israel’s friends, “peace unto thee, shalom.”

“We’ve already begun to cooperate on combating corona(virus), and I am sure that together we can find solutions to many of the problems that afflict our region and beyond,” Netanyahu said. “Let us rise above any political divide. Let us put all cynicism aside. Let us feel, on this day, the pulse of history. For long after the pandemic has gone, the peace we make today will endure.”

In addition, the Arab leaders spoke of their hope for a two-state solution for the Palestinians and Israel.

“I stand here today to extend the hand of peace and receive a hand of peace,” he said. “Today, we are already witnessing a change in the heart of the Middle East, a change that will send hope around the world.”

Bahrain Foreign Minister Abdullatif bin Rashid Al Zayani said the day was a point of hope and a “historic step.”

“Today’s agreement is an important first step, and it is now incumbent on us to work urgently and actively to bring about the lasting peace and security our peoples deserve,” he said. “A just, comprehensive and enduring solution to the Palestinian-Israeli conflict will be the foundation, the bedrock of such peace.”

(JTA) — Israel signed peace treaties with the United Arab Emirates and Bahrain at the White House on Tuesday, with President Donald Trump calling the moment the “dawn of a new Middle East.”