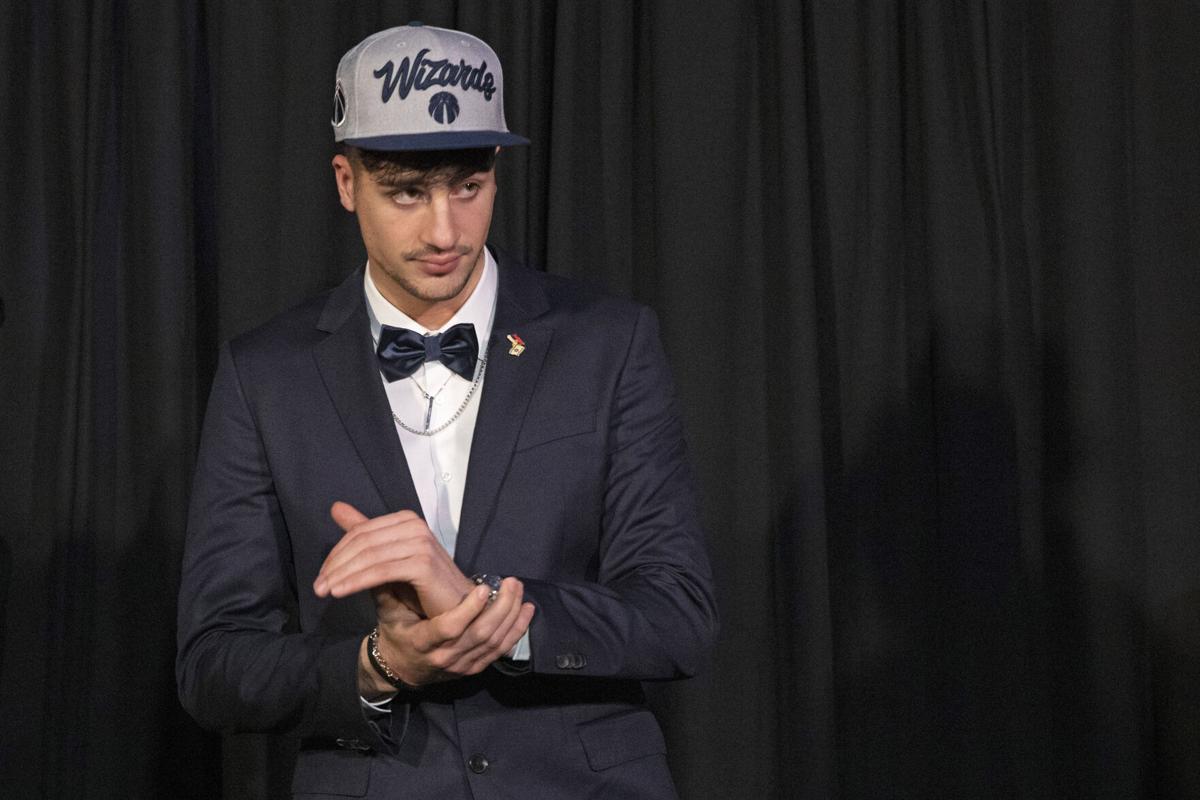 Deni Avdija speaks to the media from Tel Aviv after the Washington Wizards picked him No. 9 in the NBA draft 2020 on Nov. 18. 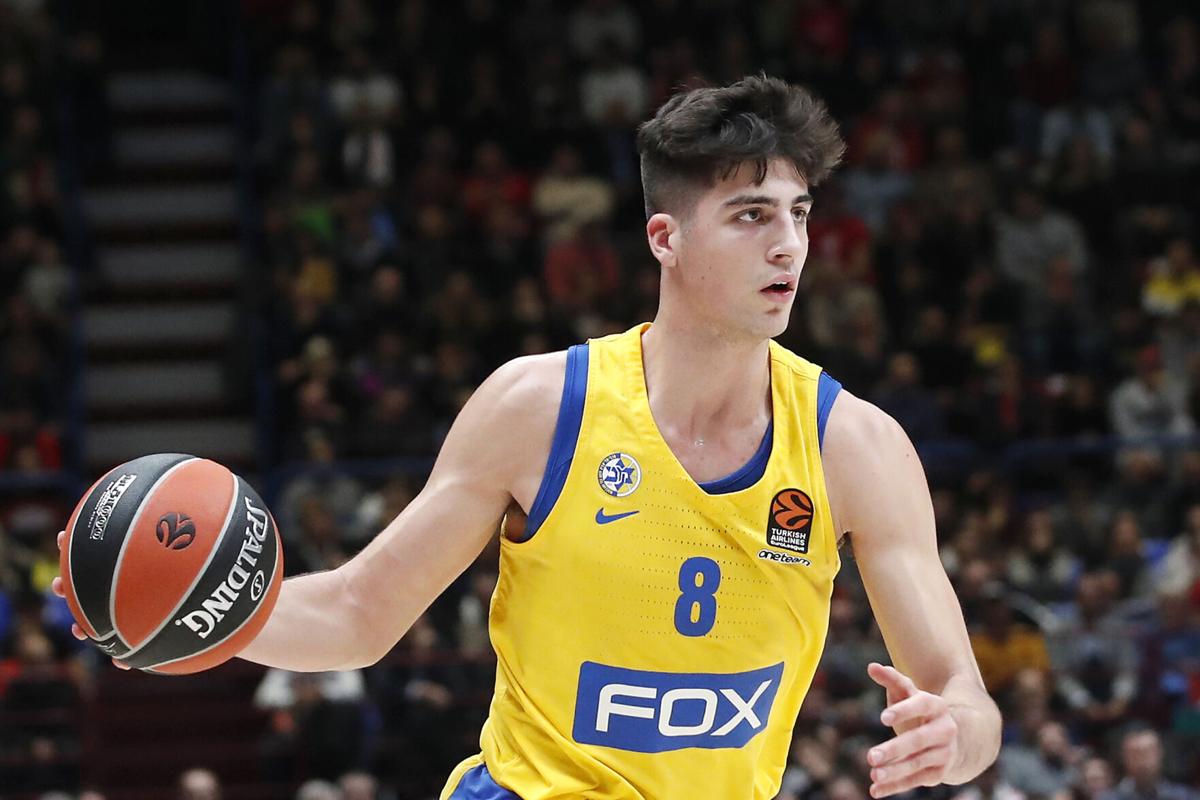 Maccabi Fox Tel Aviv's Deni Avdija controls the ball during the Euro League basketball match between Olimpia Milan and Maccabi Fox Tel Aviv, in Milan, Italy. He was drafted No. 9 by the Washington Wizards in the NBA Draft Nov. 18.

Deni Avdija speaks to the media from Tel Aviv after the Washington Wizards picked him No. 9 in the NBA draft 2020 on Nov. 18.

Maccabi Fox Tel Aviv's Deni Avdija controls the ball during the Euro League basketball match between Olimpia Milan and Maccabi Fox Tel Aviv, in Milan, Italy. He was drafted No. 9 by the Washington Wizards in the NBA Draft Nov. 18.

Deni Avdija, the Israeli teenage basketball sensation, was selected by the Washington Wizards with the No. 9 pick in the NBA Draft Nov. 18. He will be the third Israeli to play in the NBA and the highest Israeli drafted.

“Israel is such a small country that doesn’t provide as many NBA players as other countries, but for me just to represent my country and to make history, that’s a blessing,” Avdija said during a video news conference with reporters.

“I have the whole nation behind me. I hope I’m going to represent well. I never dreamed about this moment. I’m thinking it’s just still a dream. I mean, I don’t have any words.”

Watch: Deni Avdija selected at No. 9 by the Washington Wizards

Israel made more history later in the night when the Boston Celtics drafted Yam Madar in the second round with the No. 47 pick.

Madar, a 6-foot-3 point guard who was born in Beit Dagan, played for Hapoel Tel Aviv of the Israel Premier League and was a member of Israel’s Senior National Team. He was named the league’s most improved player this year – the youngest player to win the honor. The 19-year-old earned a gold medal with Israel’s Under-20 team in the 2019 FIBA European Championship, where he averaged 15.9 points and 7.7 assists per game.

Avdija is looking forward to joining the Wizards and said he would fit in well with the Wizards.

“I am a player who is very easy to adjust, getting along with everybody,” he said. “I take advice, always ask questions to get better every day. I’m going to have the best environment around me to make sure I’m getting better and getting ready for the season.

Avdija debuted with Maccabi Tel Aviv in 2013 as a youth player and debuted for the senior team at age 16, the youngest player in team history. He was named the most valuable player in the 2018 version of the EuroLeague after he averaged 16 points, 4.8 rebounds and 4.3 assists per game. In the 2019 FIBA Under-20 European Championship, he was named most valuable player.

As for the idea of inspiring young Israelis to pursue basketball, Avdija said, “I’m just glad they have somebody to look at and learn (from) – and just be motivated to see that us being a small country doesn’t mean that we can’t do big things.”

His father, Zufer Avdija, is a Serbian-Israeli basketball coach and former player. His mother, Sharon Artzi, was a track-and-field athlete.

Prior to the draft, Avdiji asked fellow Israeli Omri Casspi for advice. Casspi was the first Israeli drafted in the NBA, when he was taken No. 23 in 2009 by the Sacramento Kings. Casspi, who has played for numerous teams, was with the Cavs from 2011 to 2013. He played for seven different teams and twice for the Kings. He last played for the Memphis Grizzlies in 2019 and now plays for Maccabi Tel Aviv.

“We talked a lot about the NBA, about his rookie year,” Avdija said. “I wanted to know what I could do the best as a rookie ... how is all the travel and the schedule.”

Gal Mekel, the second NBA player from Israel, signed a contract with the Dallas Mavericks in 2013 and played for the New Orleans Pelicans in 2014. He now plays in Spain.

Meanwhile, the Cavs drafted Isaac Okoro, a 6-foot-6 small forward from Auburn University in Auburn, Ala., with the No. 5 selection. Okoro signed a deal Nov. 21.

The Minnesota Timberwolves made Anthony Edwards, a 6-foot-5 shooting guard from the Uni-versity of Georgia in Athens, Ga., the No. 1 pick.

The draft took place at ESPN’s headquarters in Bristol, Conn., and no players were there. The draft was originally scheduled for June 25 and was delayed due to the COVID-19 pandemic.