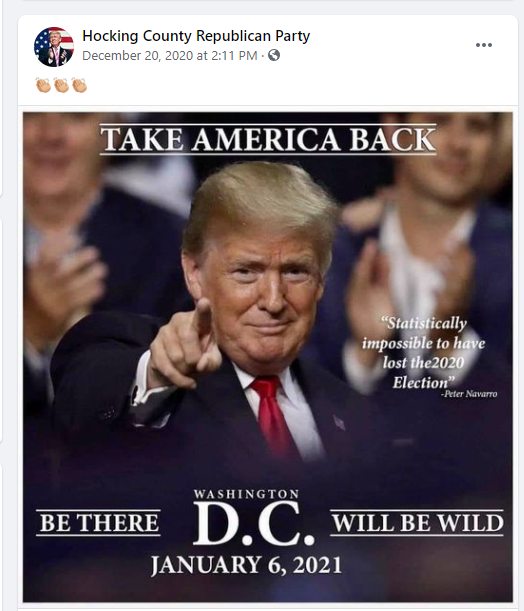 The Hocking County Republican Party shared this flyer in December advertising a gathering at the nation’s capital on Jan. 6 reading “BE THERE … WILL BE WILD.” 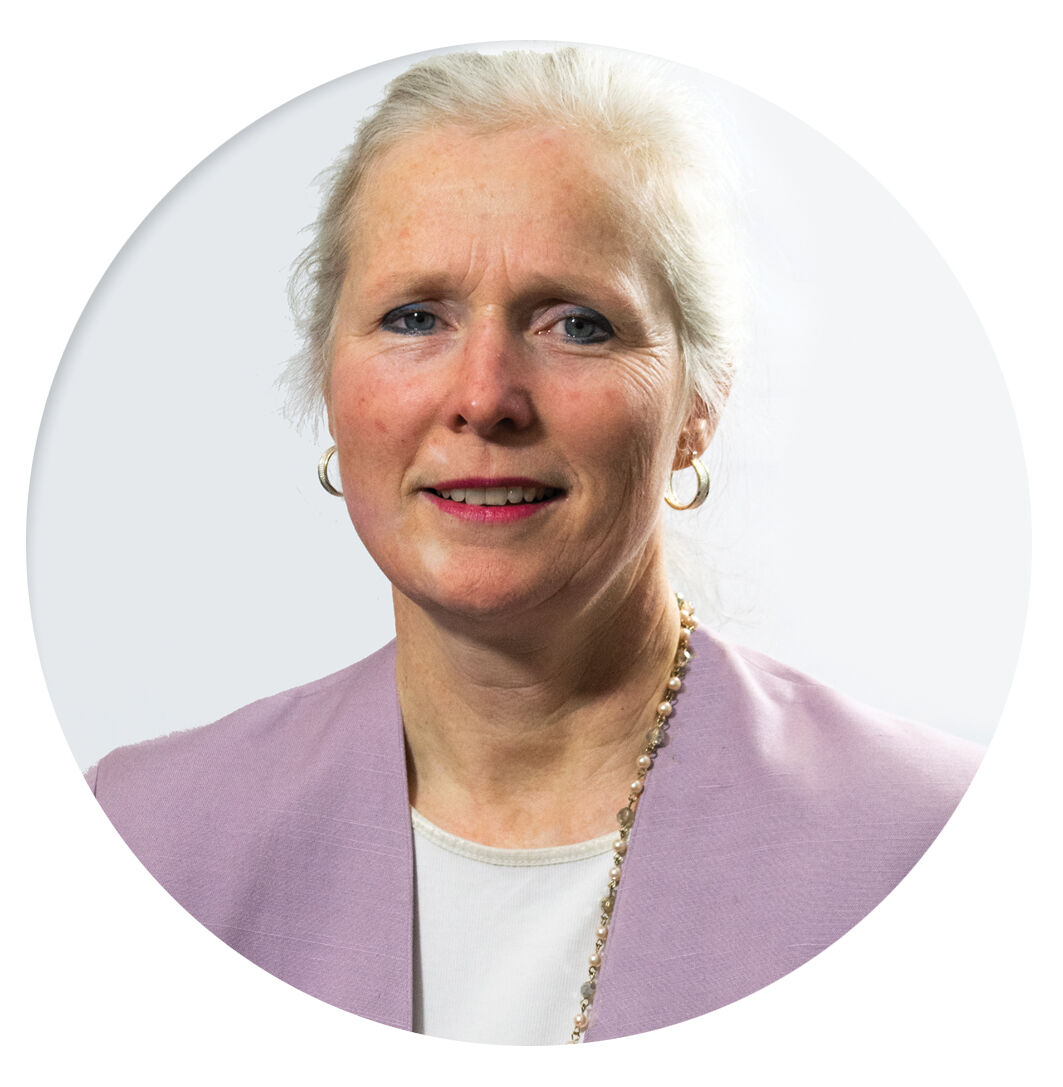 A state Board of Education member organized a bus trip to Washington D.C. to participate in a “Stop the Steal” event, which descended into a chaotic, seditious mob raid on the U.S. Capitol as Congress voted to affirm the presidential election.

Kirsten Hill, who was elected to a four-year term in 2018, organized for a bus to travel from Elyria, Ohio (departing at 3 a.m. Jan. 6) to arrive in Washington D.C. to join the event, according to an online event page hosted by a group she runs.

The site, run by the TEA Party of Lorain County, hosts links to the now-defunct site “www.wildprotest.com” in encouraging signups. It lists Hill specifically as the organizer.

The event and riot are inextricably tied to the untrue assertion that President Donald Trump won the November election, not Biden. Supporters of this theory have baselessly alleged election fraud in several states Biden won despite a lack of evidence, increasingly unhinged theories of fraud sometimes linking state governors to Hugo Chavez, or dozens of courts rejecting the claims.

Cyber Security and Infrastructure Security Agency Director Chris Krebs told 60 Minutes the election was “the most secure in American history.” Trump then fired him.

On Jan. 6, a day likely to live in infamy in U.S. history, a crowd of hundreds, if not thousands, rushed the U.S. Capitol. Five people died, including Brian Sicknick, a Capitol police officer who was reportedly struck in the head with a fire extinguisher, and Ashli Babbitt, a woman shot by police trying to breach a door within the Capitol. Dozens of police officers were injured in the raid.

The insurrectionists assaulted officers, destroyed historical property within a beacon of American democracy, and delayed a Congressional certification of electoral college votes by a few hours via brute force as lawmakers were evacuated.

It’s unclear what role the Ohio bus patrons played in the riots, if any. Hill did not respond to multiple phone calls and emails Monday.

The Lorain Chronicle-Telegram, which first reported Hill’s participation in the rally, quoted her saying no members of the Ohio bus group entered the Capitol.

“We’re not damaging property,” she told the outlet. “That’s high on our list. We respect people’s property and the public property.”

A link on the TEA Party of Lorain County’s homepage directs users to another website, www.OHpatriots.org which states it is possibly organizing a trip to Washington D.C. for President-Elect Joe Biden’s inauguration Jan. 20.

“If by chance (or design) President Trump will be the one getting inaugurated on the 20th, our fleet of buses is ready to go,” it states.

The site’s “Who We Are” page states it is a declaration of independence from “New World Order” written Dec. 20. The site is rife with conspiratorial misinformation.

“We recognize that our country is LITERALLY AT WAR and the enemy has penetrated behind our lines of defense, through the means of corruption an over an extended period of several decades,” it states. “This war is first ideological, as much as it is political, economic, technologic, biologic, and cybernetic. It is a silent war with the most devastating effects of take-over and control masked by the misinformation campaign unleashed by the globalist media empire.”

Hill is also one of several plaintiffs who filed a lawsuit against the Ohio Department of Health challenging the “absolute tyranny” of state health orders like the mask mandate issued to slow the spread of COVID-19.

The lawsuit is predicated upon conspiracy theories related to COVID-19, including that the government is knowingly suppressing the relative harmlessness of COVID-19 compared to other diseases.

Several other bus trips transporting Ohioans to the nation’s capital on Jan. 6 were promoted by county Republican Party organizations.

The Republican Parties in Ashtabula, Portage and Trumbull counties shared a flyer for one overnight trip costing $219. The flyers name the trip organizer as Cathy Lukasko, identified in various 2020 news reports as the auxiliary chair of the Trumbull County Republican Party.

In a separate post, the Ashtabula County page noted Jan. 6 as the date of a “Wild Protest” in D.C.

The Republican Party in Geauga County shared sign-up information at the www.OHpatriots.org link, while the Republican Party in Van Wert County offered details of a trip originating in northwest Ohio. On New Year’s Eve, the Jefferson County Republican Party asked supporters interested in taking a trip leaving from Steubenville to contact the party by email, “so it can be determined if there are enough people.”

“We are posting this, but it is not being sponsored by the Jefferson County Republican Party. We will forward your information to the organizer,” the post states, noting a cost of “approximately $50-75 per person.”

The Hocking County Republican Party shared its own flyer advertising a gathering on Jan. 6 in the capital with the header “TAKE AMERICA BACK.”

Tyler Buchanan contributed to this report.

This story was originally published in the Ohio Capital Journal.

Michigan Rep. Elissa Slotkin joins call to impeach Trump, last of 25 Jewish Democrats to do so