‘We are on our own’: Israel plans action against Iran as world stalls on nukes

44 games into its winning streak, Yeshiva U’s basketball team is now No. 1 in its division

Musicians, politicians and a ‘Housewives of New York’ star speak out against antisemitism at Times Square event 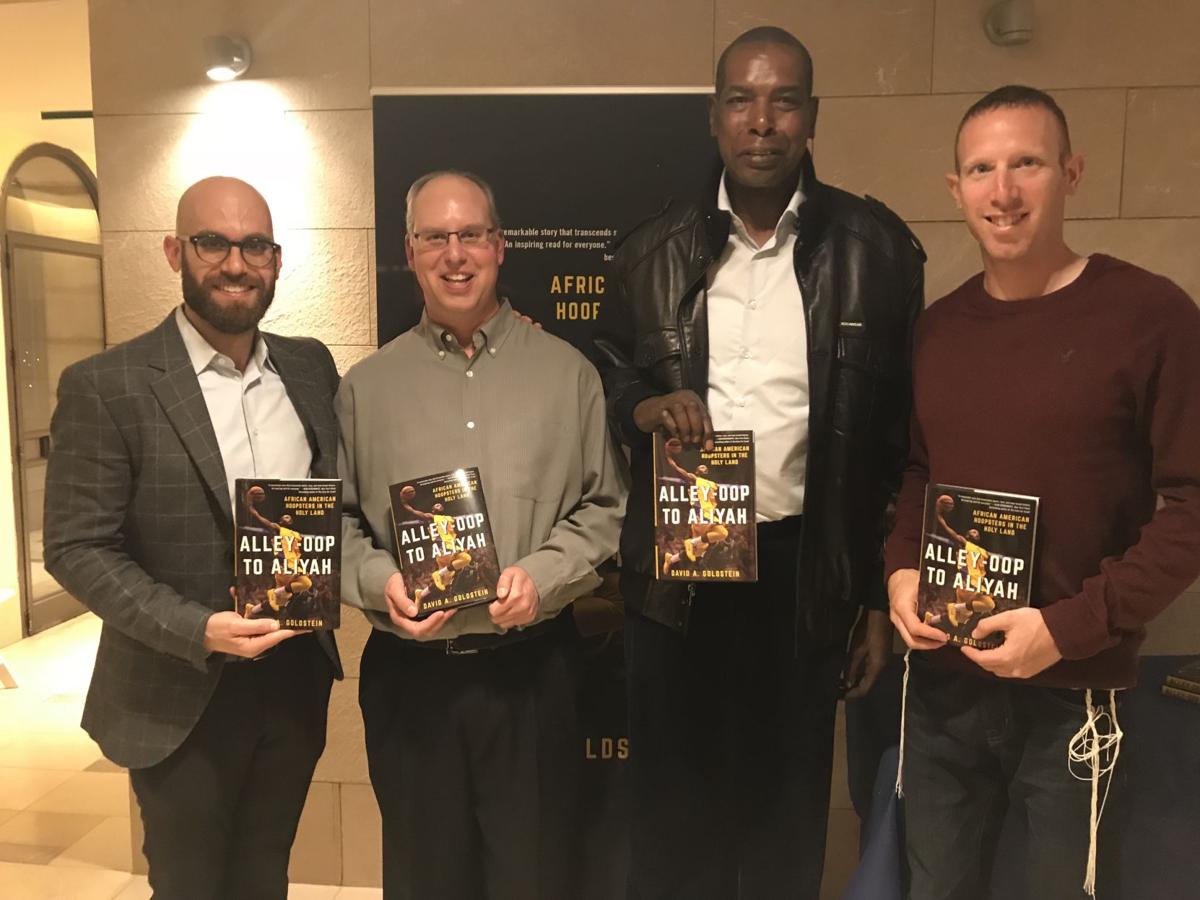 David Goldstein, Josh Halickman, Aulcie Perry, and Tamir Goodman pose for a picture at a Nefesh B’Nefesh event in Jerusalem. 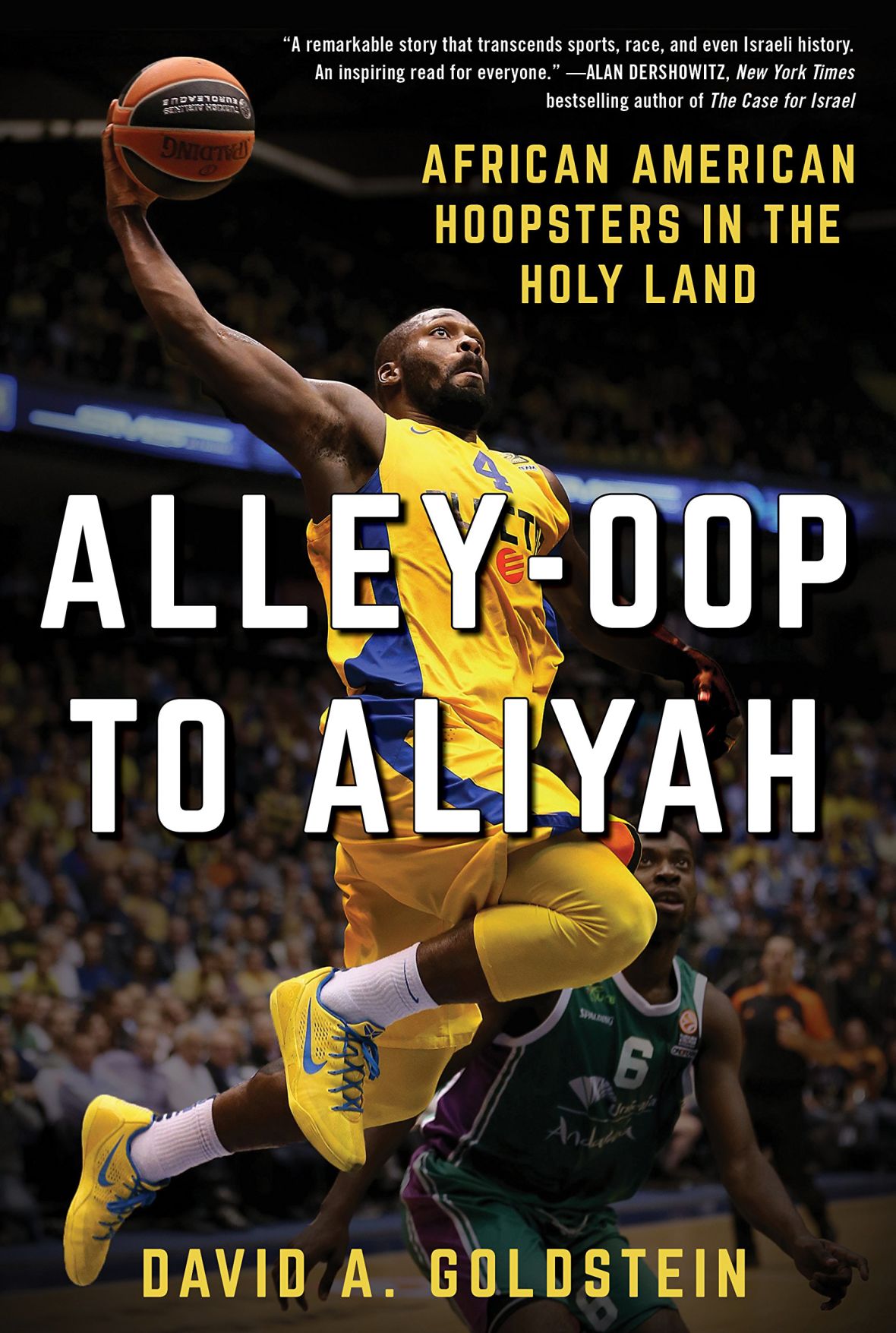 Canadian sports executive, lawyer and author of the new book Alley-Oop to Aliyah: African American Hoopsters in the Holy Land, David A. Goldstein is often asked why he decided to write about hasbara, or positive propaganda used to convince others to support Israel. But according to Goldstein, when he started on the book 11 years ago, he discovered an unknown, upbeat phenomenon.

“I didn’t set out to create that positive feeling about Israel. That feeling is created by this country—how players embrace it, and in turn, how this country embraces them,” he said at a Nefesh B’Nefesh event featuring a panel with some of Israel’s most well-known Zionist basketball superstars.

According to Goldstein, more than 800 African-American players have competed in Israel. “This phenomenon was hiding in plain sight,” he told JNS. “It’s a phenomenon that’s much larger than many realize. After playing here, some players convert. And others fully commit to living life here as Israelis—staying and becoming citizens, joining the IDF and raising their kids as Israelis with fluent Hebrew.”

Although many hoopsters are at first hesitant to even visit Israel, let alone live there, said Goldstein, many come for the beautiful weather and scenery, friendly people, good nightlife and the ease at which English speakers can get by.

“They celebrate Jewish holidays like Purim and Pesach, go to beach or the Western Wall, show patriotism on Israel’s Independence Day and even choose the No. 18 jersey (“chai,” the number symbolizing life in the Jewish faith) later in their careers as a homage to Israel and the Jewish people,” he said.

As they embrace Israel, Goldstein found, Israel embraces them back. “In Israel, players are welcomed in a way that’s special compared to other countries,” said Goldstein, who maintained that in the context of Israel being somewhat of an outcast in the international political arena, the fact that high-profile athletes would choose to come to Israel and fully embrace the country “means something special here and is a big complement.”

“They like Israel—and even love it—take less money and then go on to tell others Israel is not what they see on the news,” said Goldstein. “They become part of the family.”

According to Goldstein, although players who stay in Israel and become citizens have the notoriety of being famous players, they share a lot of commonalities with other olim (new immigrants) who become citizens. While they speak about having no personal space at the bank and dealing with aggressive drivers, they are also invited to Shabbat dinners. “It’s the flip side of the coin—how everyone stops to help, but also to criticize,” Goldstein told JNS, describing the Israeli phenomenon of being treated as family for better and worse.

‘NBA Is Possible for Israelis’

Aulcie Perry is perhaps the first and best example of a player fully embracing Israel and being embraced in return. “Aulcie is the forefather of this movement and phenomenon,” said Goldstein.

Perry originally signed a two-month contract with Maccabi Tel Aviv in the mid-1970s but ended up not only staying in Israel but serving in the Israel Defense Forces, converting to Judaism and becoming an Israeli citizen.

Perry’s aliyah predated Nefesh B’Nefesh, an organization founded in 2002 to make the process easier and facilitate the integration of new immigrants into Israeli society. Thus, he spoke of various hardships getting used to the culture; even so, Perry fell in love with Israel, recalling his first year with Maccabi as “an unbelievable dream come true” to play at a high level and have the whole country behind the team.

He found that he was accepted in Israel in a way he never experienced in the United States. “I was born in the 1950s in America during the Jim Crow laws of segregation and discrimination,” Perry told JNS. “And here in Israel, I learn there’s 100 ethnic groups all together as one and hardly no racism,” he said. “And that opened the door.”

Goldstein, who has studied the intersection of sports, Zionism, culture and race for more than a decade, found that other African-American players share this sentiment. “By and large, they don’t feel racism,” he stated. “Many see commonalities in the history of persecution between Jews and African-Americans.”

According to American-Israeli Josh Halikman, editor of sportsrabbi.com, this phenomenon that Goldstein found, and sports in general, “speaks volumes of who we are as a country and a people.”

“Everyone knows that Israel is the best country to play in,” said Perry. “I don’t know any African-American basketball player who doesn’t want to play here.”

Tamir Goodman, an American-Israeli basketball player known as the “Jewish Jordan,” found this capacity of family-building especially unique when he moved to Israel. He told JNS of its special capacity “to break through boundaries while at the same time uniting so many people.”

Goodman lauded the influence of African-American players in Israel who have changed the Israeli basketball industry. “Their influence in Israel is all positive, as I see it,” he said. “Now, playing in the NBA is possible for Israelis. We wouldn’t have gotten that if not for African-American players who taught us a different style of play, better defense and how to get to hoop. We learn from the great players, and that’s what basketball is about—not settling and going for the best.”

Goldstein concurred with Goodman, saying, “When you’re an Israeli kid playing basketball, it’s an escape or a game. But if you’re an African-American playing here, it’s your job, and you work hard at it,” said Goldstein. “They teach Israelis players to raise their work ethic. Omri Casspi said he learned about hard work and dedication from them.

“I want people to know that if they see an African-American basketball player walking around in Israel or watch them play, they know what that person has contributed in so many different ways.”

As he told JNS, “my biggest aspiration is that this very positive phenomenon about a really amazing group of people, and a really unique and amazing country, becomes better known.”