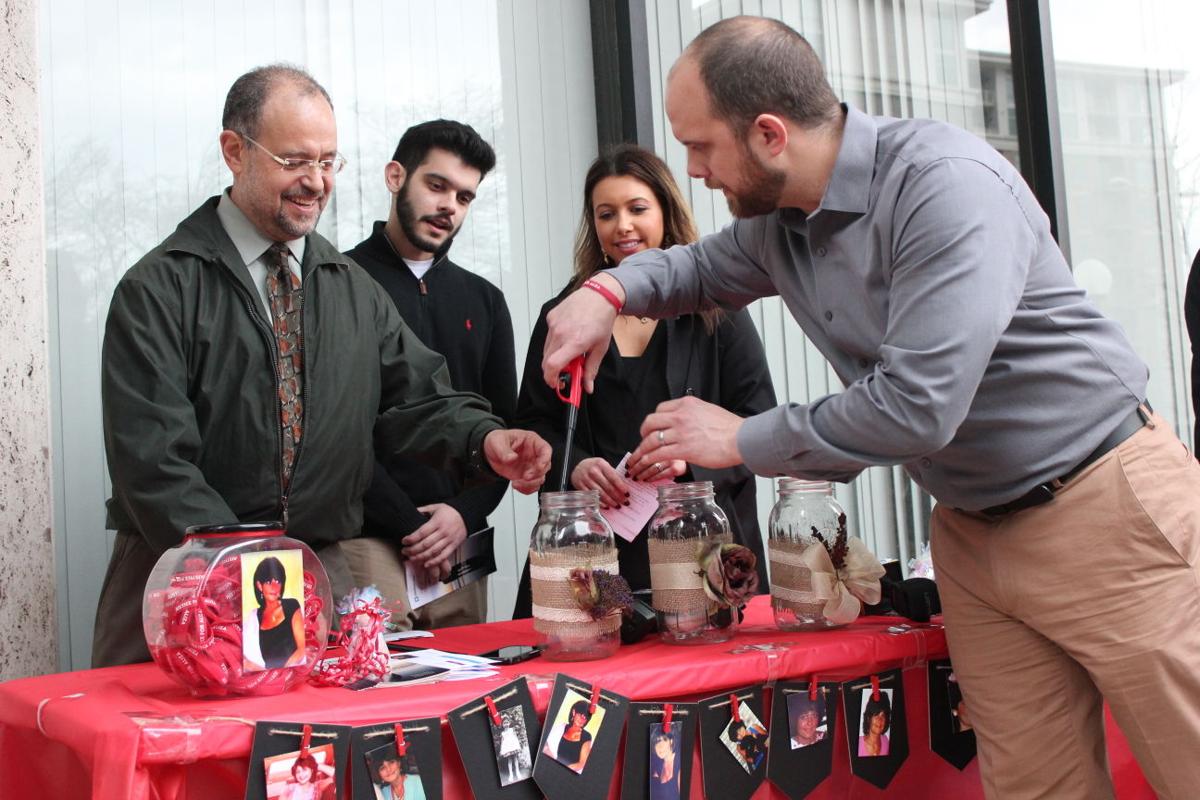 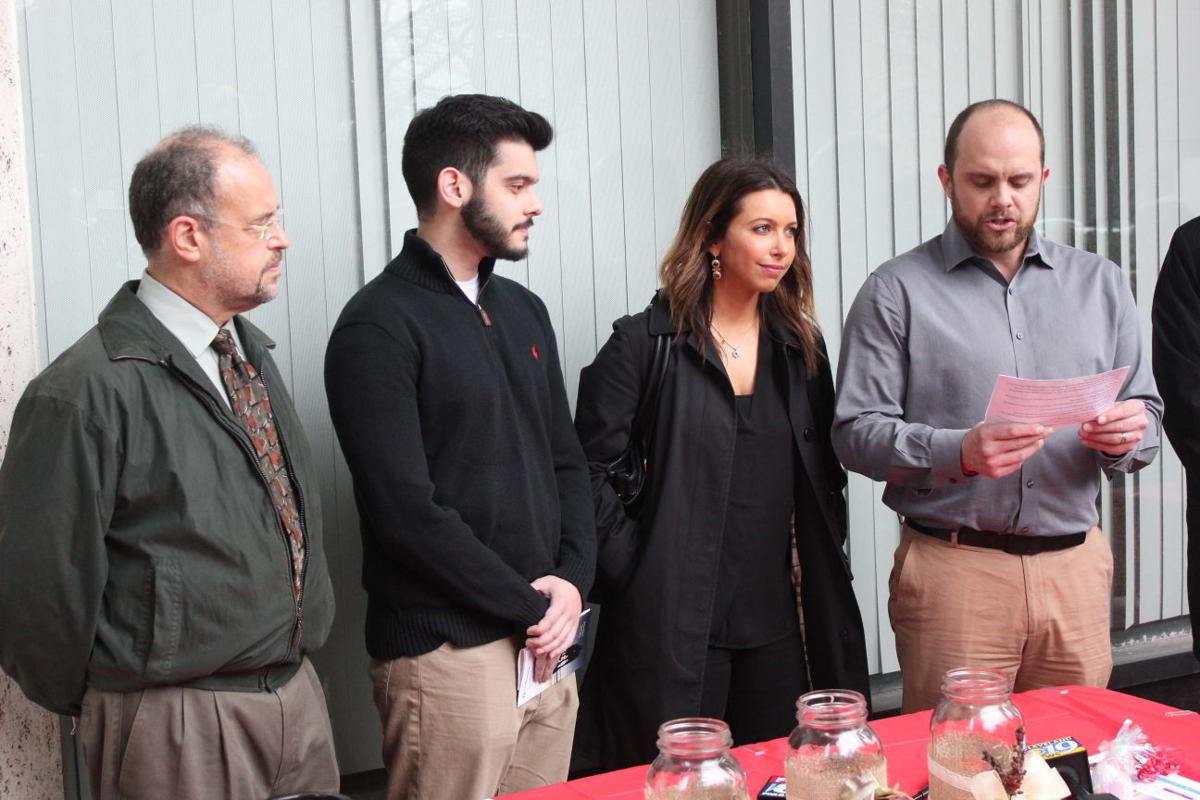 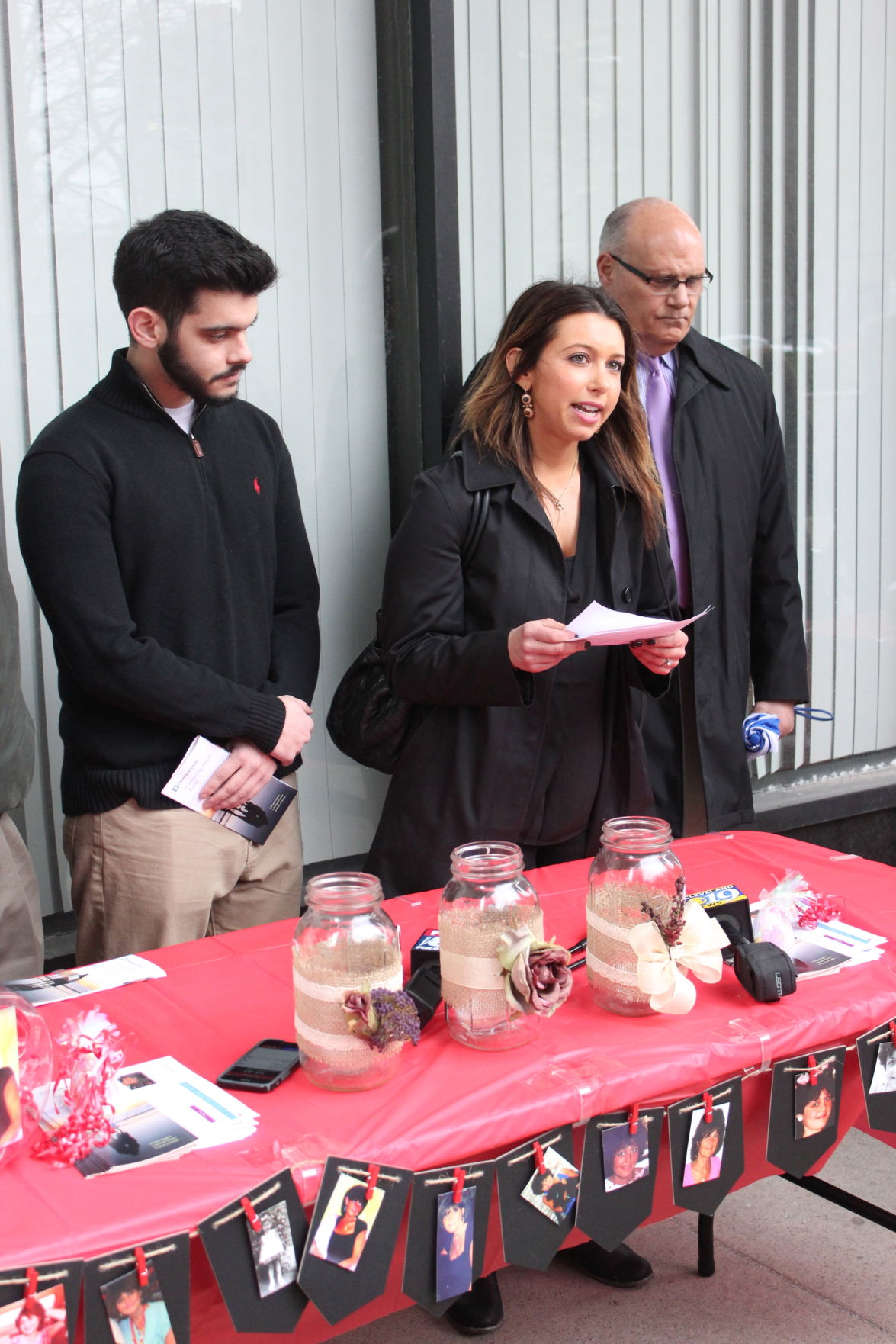 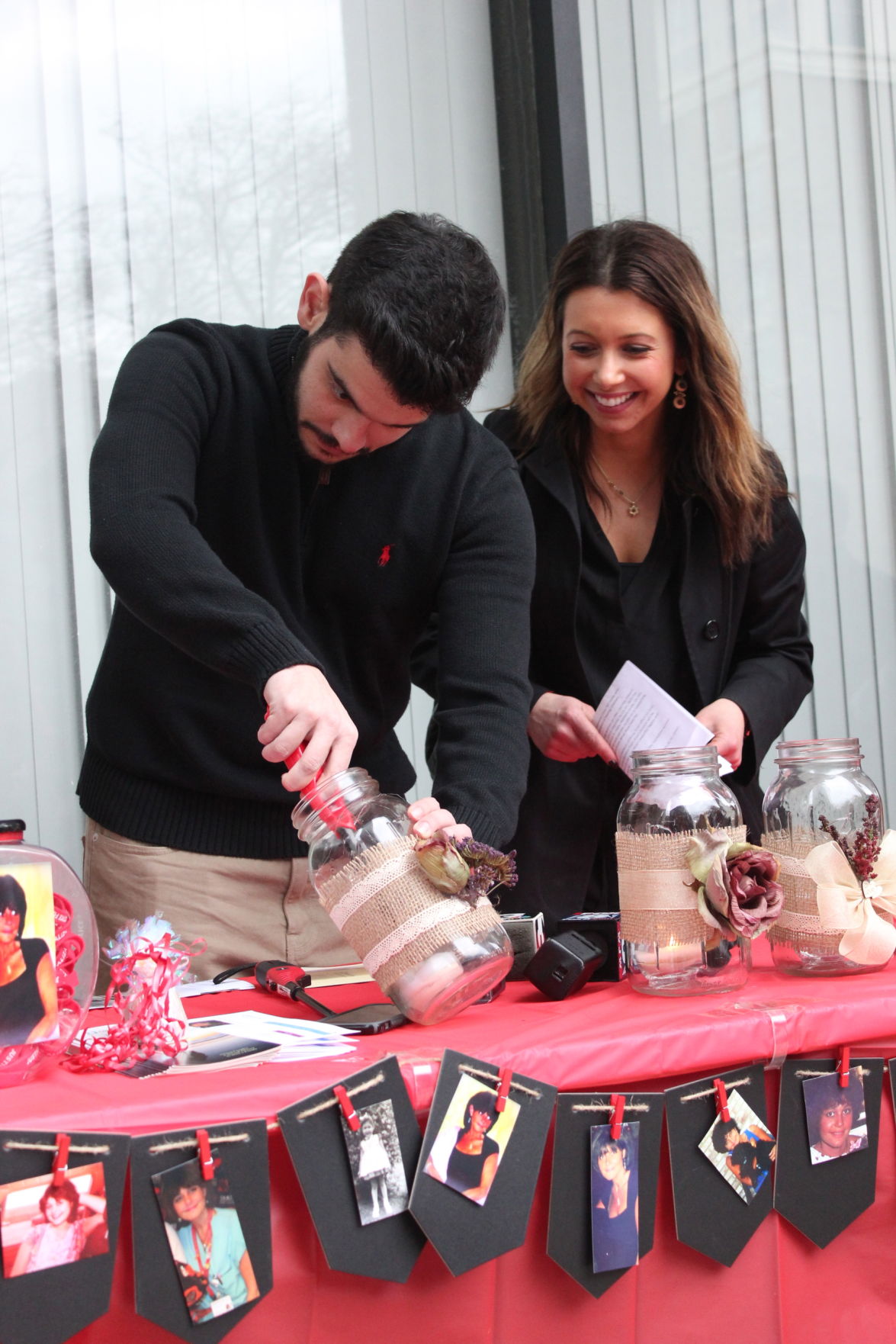 Jason Sherman lights the last of three candles marking the the three-year anniversary of Aliza Sherman's murder as his sister, Jennifer, looks on at a March 24 ceremony in downtown Cleveland.

Jason Sherman lights the last of three candles marking the the three-year anniversary of Aliza Sherman's murder as his sister, Jennifer, looks on at a March 24 ceremony in downtown Cleveland.

In the three years since Aliza Sherman's brutal murder, family and friends of the Beachwood nurse have continually demonstrated their willingness to drive away any darkness shrouding their search for justice with a simple but powerful response: shining a light.

In many ways, such was again the case March 24, when during a ceremony on the three-year anniversary of Sherman's stabbing death, more than 30 people gathered at the scene of the crime – 75 Erieview Plaza, just outside Sherman's divorce attorney's downtown Cleveland office – to remember their lost loved one.

A central part of the ceremony was the lighting of three candles symbolic of the three years that have passed, the flames from which helped drive out the darkness of overcast skies and threatening clouds.

Even more meaningful than that light, though, was that which accompanied the announcement that a partnership honoring Sherman has been formed with the Cleveland Clinic – a light that for some will help drive out darkness concerning the fact that still no one has been charged for Sherman's murder.

That partnership will take the form of a Mother's Day brunch in honor of Aliza Sherman. Scheduled for 11 a.m. May 8 at the Beachwood Family Health and Surgery Center, the same facility at which Sherman served as an in vitro fertilization nurse, the brunch will serve to raise money for Cleveland Clinic's Harboring Hope Fund, which offers childless couples who have failed one cycle of IVF at Cleveland Clinic another opportunity to add children to their family.

"I’m truly excited that we’re going to be able to do an event for a cause she was so passionate about on a day that holds so much meaning for us," said Sherman’s daughter, Jennifer. "It’s going to make the day a little bit easier, too, to continue her legacy and to keep doing things in her honor. … We’re really appreciative that the Cleveland Clinic is excited about it, too."

Jennifer Sherman, who's been at the forefront of Justice for Aliza's efforts to keep her mom's case in the public eye, said tickets to the brunch will cost either $25 or two for $45, adding that donations from those who can't attend but still wish to honor her mother will also be accepted. She added that themed gift baskets will be available via raffle in an effort to raise additional funds, and that the brunch will be catered by Café 56.

Aliza Sherman's brother, Dr. Edward Czinn, who as he's done each of the past two anniversaries flew in from Fort Lauderdale, Fla., to take part in the ceremony, said he feels the brunch will be a great way to honor his sister's memory.

"I think the Cleveland Clinic event is something Aliza would’ve loved," he said. "She started as an obstetrics nurse, she loved bringing the happiness that brining babies into this world brought to mothers – that’s how she got into in vitro fertilization. She worked very hard, she counseled the mothers-to-be and was dedicated to that, so I’m really glad they’re going to do (the brunch)."

Still, the weight of March 24 can sometimes feel inescapable to those closest to Sherman.

Also in attendance at the anniversary event was one of her three sons, Jason Sherman, who graduates in May from Ohio University’s Heritage College of Osteopathic Medicine and will subsequently start a residency at Cleveland Clinic. He acknowledged that learning about his residency match without his mother – who attended his college graduation and white coat ceremony – there to congratulate him wasn’t easy.

Nor was revisiting the scene of his mother's death, though he expressed thanks for the support from friends and family that helps him endure.

"I hate this day. It’s my least favorite day of the year. Emotionally, it’s very taxing, and I never enjoy the drive down here," he said. "But then I get here, and I feel comforted being around everyone. It means a lot."

As for the investigation into Sherman's murder, nothing was said at the anniversary ceremony regarding Gregory J. Moore, Sherman's divorce attorney at the time of her murder. Moore, a 42-year-old Sagamore Hills resident, faces charges of tampering with evidence, telecommunications fraud, possessing criminal tools, two counts of forgery, falsification and obstructing official business in relation to the investigation.

In announcing a grand jury indictment of Moore on Jan. 28, the Cuyahoga County Prosecutor’s Office said in a statement that police investigation revealed that on the day Sherman was killed, Moore sent text messages to her cell phone just prior to and after her murder. Those messages indicated that he was in his office, but phone records analysis, electronic keycard records and witness statements show he was not in the building. Moore then made false statements to Cleveland Police homicide detectives when questioned about his whereabouts.

Moore pleaded not guilty to those charges as well as nine others related to a series of 2012 bomb threats, which authorities had already been investigating and that were included in the grand jury indictment. Moore's case is in Judge John D. Sutula’s courtroom at the Cuyahoga County Common Pleas Court.

Cleveland Police Deputy Chief Edward J. Tomba spoke at the anniversary ceremony to assure those gathered that the investigation into Sherman's murder is ongoing.

"From the police perspective, my commitment is strong to the family. We’ve made some progress in the case, but we still do not have the person or persons responsible for this heinous crime," he said. "I can assure you the Cleveland Division of Police and the Cuyahoga County Prosecutor’s Office are still working diligently on the case to bring this to a resolution."

Czinn said that knowing the police are still on the case is "somewhat heartening" but admitted he feels there's still "a long way to go."

"We’d like to see justice served. Unfortunately, that’s not going to resolve everything. This was a tremendous hit to our family; my mother still suffers dearly every day, and it’s had a tremendous effect on my brothers," he said of his siblings Harry and Steve and his mother, Doris, an Auschwitz survivor who's now 90.

“I have tremendous respect for my mother; she’s a very strong-willed woman," he added. "She misses Aliza dearly."

As does Jennifer Sherman, who over the past three years has drawn encouragement from advice given to her by friend Yvonne Pointer, who started the Gloria Pointer Foundation to advocate for abused and neglected children following the 1984 murder of her 14-year-old daughter.

"(Pointer) said, 'Jenn, you have to make sure that your mother is not defined by how she died,'" Jennifer Sherman said. "That message has resonated with me and given me so much strength because, sure, we could focus on the complex and complicated legal aspects that surround my mom’s murder or the fact that we’re still waiting for the ultimate arrest, but the important thing is to remember who she was and to emulate her – to live a little bit more like she lived her life."

For more information about the Mother's Day brunch or to donate in honor of Aliza Sherman, visit ccf.convio.net/goto/alizashermanbrunch.

For the CJN’s complete coverage of the Aliza Sherman murder, visit cjn.org/alizasherman.

It was a year of firsts as family and friends gathered to mark the four-year anniversary of Aliza Sherman’s murder in downtown Cleveland.

Sherman murder, two other cases turned over to Ohio BCI