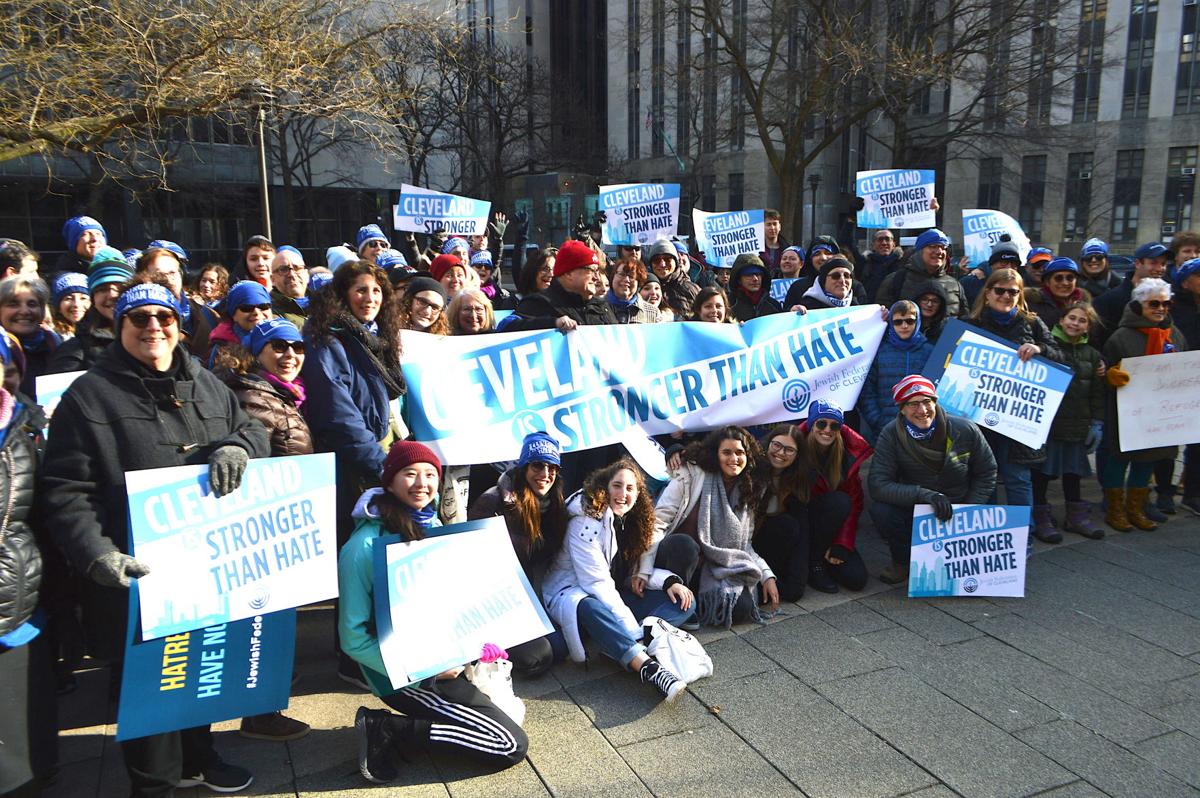 Clevelanders gather for a photo prior to stepping off on the march. | CJN Photo / Jane Kaufman 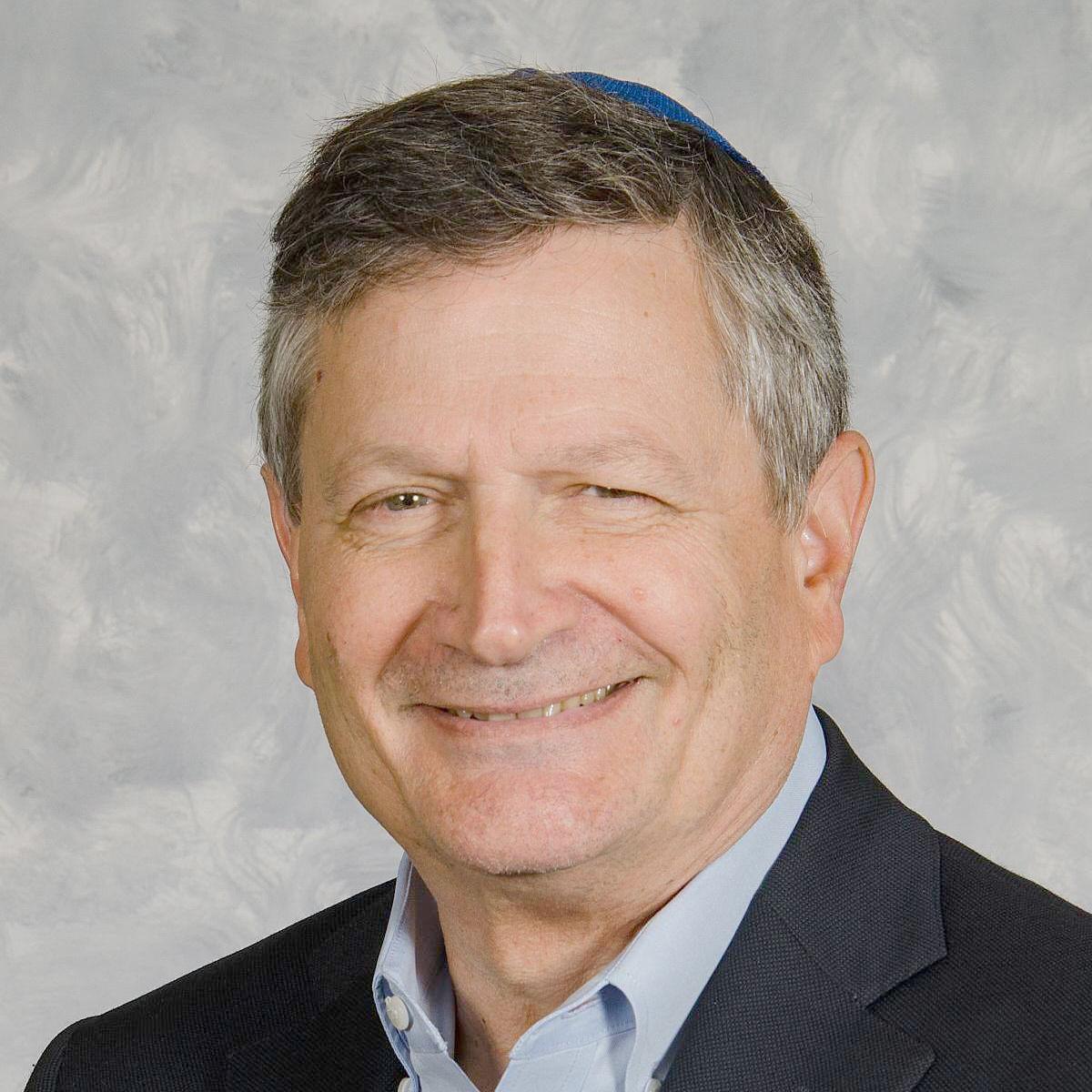 It may have been the snacks; it could have been the hour (midnight) or that we were all scrambling onto our buses and answering ‘here’ when our names were called, which made it feel for all the world like a youth group outing. For all kinds of reasons, the at-mosphere was almost too… happy, which was a bit unsettling.

But it occurred to me that these two buses with 80 or so Clevelanders traveling to be part of the “No Hate. No Fear.” rally in New York City was not a somber occasion at all, and that our joining with the larger Jewish community for this moment of solidarity did warrant a celebration of its own, notwithstanding the rationale for the rally itself. Schlepping across Pennsylvania may not qualify for a Profile in Courage merit badge. On the other hand, someone did suggest that 80% of “success” is showing up. I’d amend that to say that 80% of doing the right thing is often just standing up.

The events of the last few years, and particularly these last weeks leading up to the rally, have prompted me to look back on how anti-Semitism has manifested itself on a practical level. The philosophical literature – including the current discussion over whether the phenomenon should be relabeled antisemitism (no hyphen, no capitalization) or the more in-your-face but arguably more honest Jew-hatred – is interesting and important, but after a lifetime of working in the community, I’ve been privy to how anti-Semitism has actually impacted Jews in the States.

As we grapple with our own response and as we urge our public officials to do what they must do, that history and context is crucial. On the one hand, Alphonse was right – plus ça change, plus c’est la même chose (the more things change, the more they remain the same). This scourge has always existed. Yet things have changed – for the good, in terms of Jewish acceptance and the lessons we’ve learned about organizing and self-advocacy; and for ill, regarding the pernicious use of the internet and the lack of respect for history and memory.

As a camp director in the late ’70s and early ’80s, I and many of my colleagues had to address the occasional drive-by taunts hurled in our direction. By definition, many camps were in out-of-the-way regions, with meager Jewish populations nearby. “Towns people” and the camps enjoyed positive relationships for the most part, but it was not atypical to hear about anti-Jewish slurs yelled out from cars passing by the camps’ gates. Local police were sympathetic, but it was often categorized as “no harm done” – unless of course you were an 8-year-old Jewish camper who wondered why those drivers had said what they said. That 8-year-old (and possibly her counselors) may also have worried more than wondered – worried whether there’d be something worse than an epithet or two thrown at them.

In the late ’70s, there was a rash of letter bombs to Jewish organizations (the more things change …). In our Young Judaea office in West Los Angeles, our very dedicated receptionist/secretary tearfully told us that she’d have to leave a job she really loved, because her father told her that it wasn’t worth the “danger” she was in, after she explained that she had to look at packages for odd writing or too much postage, give-aways that something might be amiss. Our office and most Jewish community organizations posted notices in our mailrooms on what to look for. I still remember a handful of single-spaced, typed-in-the-basement letters, decrying our power/money/control (take your pick). The more things change.

As part of the Jewish community relations staff and as a regional director for Hillel, I worked with 15 campuses in Northern California during a time of “pro-Hamas” (I’m not making this up) demonstrations. Burning Israeli flags, virulent displays of anti-Israel propaganda that prompted many Jewish students to not go to classes or to take a 10-minute detour around campus so they wouldn’t be confronted by their classmates’ screaming at them if they had the temerity to wear Hebrew on their shirt or display other outward signs of their Jewishness. Stars and mezzuzot tucked invisibly beneath their sweatshirts.

And now, today. Comparisons are rife with inaccuracies. This is not Europe in 1929 – or in 1933. For that matter, it is not, thankfully, Europe in 2020. But neither is it America in the ’60s, ’70s or ’80s. Before World War II, Jews were hesitant to utilize their constitutional rights – not to mention their Jewish responsibilities – to advocate and protest and stand up, collectively, for the community. Post-war, much of that changed; the “defense agencies” (ADL, AJC, the other AJC, CRCs) spoke, if not in one voice, then at least in a few loud and proud voices. Sunday’s march was a perfect example of that – and one that needs repeating.

But rallies, marches and demonstrations are, by definition, reactionary. Important, vital, they are at best necessary, but insufficient. Jewish pride (chanted by the marchers and carried on many a sign that day) is, of course, essential. But that pride has to be coupled with and reinforced by knowledge and active engagement. This is not a commercial solely for Jewish day schools – it is though a plea for all of us to continually learn our history, to discover (or rediscover) our literature and our sages’ wisdom and our texts. To read, study, learn and be a part of a millennia-old people. The most powerful response to anti-Semitism: the joyful flourishing of Jewish life, the exuberant celebration of our language, culture and history.